I had no idea what to expect when I began Revolver by Marcus Sedwick.  I did know that it is one of four recipients of the Michael Printz Honor Award 2011 For Excellence in Young Adult Literature. 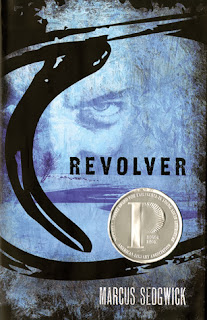 It is 1910.  A solitary cabin surrounded by snow sits at the edge of a lake, 68 latitude north, some 120 miles north of the Arctic Circle. The cold is a living, breathing thing as powerful as the death it brings quickly to the unfortunate or unwise...or the frightened.

Within the four walls of this one-room dwelling sits Sig, short for Sigfried, next to his father, Einar, lying frozen, dead, on the table.  With only his thoughts and silence for company, his sister Anna and step-mother Nadya having gone for help, Sig mulls over their family's daily life and the events that led to his discovery of his father's body on the ice.  Night comes and the new morning does not bring his sister and step-mother home, it brings a knock on the door.  That sound changes everything.

A man, a stranger to Sig, is filling the doorway.  He is a giant of a man like nothing Sig has ever seen before.

His features were coarse, his eyes far apart, his nose broad, his mouth hidden by a rough beard of ginger and white.  His head, when he removed his fur hat, was shaven to his scalp.  His skull was a disturbing shape, flat at the back, his ears too small.  It was not a face stroked into creation by God's loving hand, but battered into shape by the Devil's hammer.

This man, Gunther Wolff, has been tracking the Andersson family for ten years since the Gold Rush days in Nome, Alaska where Sig's and Anna's father was an assay clerk  Intent on obtaining a fortune in gold he believes they have, nothing, not even murder, will stay the hand of this brutal, chilling presence.

As the bits and pieces of those ten years are gathered together in alternating chapters 14 year old Sig, as well as readers, will weigh good versus evil, the Biblical teachings of his mother and step-mother versus the more practical advice of his father.

Know what you will of the world.  Know what you can, know what men are and the things they do.  Understand what God is to you, understand what you are to your loved ones.  Love, sing, cry, and fight, but all the time, seek to know everything you can about the earth upon which you stand, till your time is done.

Knowing that his father's revolver, a Colt Single Action Army, 1873 model, The Peacemaker, is within his reach fills him with hope and fear.  "A gun is not a weapon," Einar once said to Sig.  "It's an answer.  It's an answer to the questions life throws at you when there's no one else to help."

Profound thoughts, crisp, descriptive dialogue and concise chapters entrap readers, as Sig and Anna are by Wolff, speeding quickly to a resolution that defines home, family, faith, hope and love.

Even the dead tell stories is the compelling first line of this thriller but it is also the means to an end; an end that readers may not see coming.

Recommendations for this story are high and I'm adding mine to the growing number.  Readers from grade seven on up will not be able to put it down until they have finished.  Then they will close the cover and say ever so quietly, "Wow".  Around the dinner table, in classrooms or in book groups discussions will abound.
Posted by Xena's Mom at 7:55 AM