Despite saying in my post on Monday, June 27, 2011, that I was going to only highlight one graphic novel prior to making a page of others that I have read over the past several days, I have to write a review of The Unsinkable Walker Bean by Aaron Renier; it's that good. 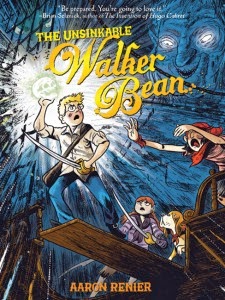 According to legend Atlantis disappeared into a trench near an unspecified location around the Mango Islands.  It was destroyed by the evil Tartessa and Remora, merwitch sisters, who were subsequently sentenced to live eternally in the deep, dark depths of this trench.  To sustain themselves the two took the bones of their victims turning them into "pearls" using them to make a wall surrounding their new home.  The combined energy from all the skulls of these dead; their memories see all---past, present and the future. Peering into the eyes of any one of them reveals long lost treasures of land and sea.  Learning these secrets comes at a price---a slow, wasting death.

Walker Bean, a somewhat chubby, bespectacled lad grew up hearing these tales from his grandfather, an Admiral, who, truth be told, is more of a father to him than his own.  Their need for adventure, inventing ingenious contraptions and exploring the unknown to disclose the truth sets them apart from their contemporaries but binds them together in the strongest of loves.  Now, Walker's grandfather is dying.

To save his grandfather our unlikely hero rides ships embroiled in high-seas, swashbuckling adventure living among pirates, survives cannon blasting battles, evades a suspicious goggle wearing doctor of a dubious nature, and the pursuing merwitches grown to the size of Kraken.

As if this non-stop action is not enough Renier adds a feisty, sulky, skeptical girl pirate, Genoa, who grows a garden aboard the ship, Shiv, a deckhand with a special musical gift and what Walker lacks in brawn he more than makes up for with brains altering the ship to travel over land, disguising its direction at night with starry black sails and a unique steering gear.  To complete the cast of characters is the ever present pooch on board, Perrogi.  Snappy, hand-lettered dialogue via speech balloons supply the story line seamlessly with vigor and zip.

Many want the stolen skull for the riches it will bring but who is willing to do what must be done?  Who will accomplish that task and will it be in time?

Readers will be asking themselves, "What is there not to like about this book?"  I had best be getting at least one more copy.  I do believe that they will never be seen on the shelves in the library media center but passed from one eager reader to another all year long.
Posted by Xena's Mom at 9:47 AM