A Promise Is Kept

I have a new favorite dog book; yes I do!   A couple of days ago Eric Rohmann's new release (July 19th), Bone Dog, found its way into my possession. As he did in his 2003 Caldecott Award winning book, My Friend Rabbit, Rohmann employs a printmaking technique for his illustrations.  Here is a quote from his web site about that artistic style:

After making two books using large two page spreads painted with oils I had the idea to try something different....So I went back to a kind of artmaking I’d done in school — printmaking, deciding to make the book with hand colored relief prints—bold color and a chunky, jaunty line — to illustrate the silly story of a overly enthusiastic rabbit and his reliable friend, Mouse, who always mops up after him....

I am so thankful that Eric Rohmann was kind enough to respond to an email I sent asking about the art employed in Bone Dog.  He says:

The illustrations were made just about the same way as with MF Rabbit. I made the key image in relief (the black line), printed it with oil based inks and added the color with watercolor. With Rabbit I tried to give a feel for a woodcut with the color. I had the idea to make the entire thing with relief printmaking but did not have the facilities. With B. Dog I used looser washes and a more subdued palette.
I try to use the medium which best serves the story. Rabbit was supposed to be comic, and for slightly younger readers, so I decided on a chunky, jaunty cut line and bright color.


Using warm, soft colors associated with autumn and the changing of seasons (which are a mirror for changes in our lives) framed with heavy black lines, Rohmann's two page panoramic pictures depict the uplifting story of a boy, his dog and a bone-tingling Halloween night. 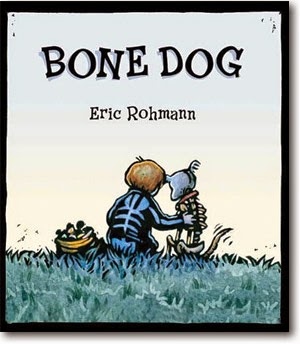 The cover and the translucent overlay (which is sheer genius) on the title page are clearly a foreshadowing of the loss that begins this tale.  Ella, the dog and her boy, Gus have been friends for so long that as they sit beneath a full moon one evening she says:  "I'm an old dog and won't be around much longer.  But no matter what happens, I'll always be with you."

It's hard for Gus to leave the house, do his chores or go out trick or treating without Ella but he does.  It's on his way home, bag heavy with treats, that Gus walks through the graveyard.  It's dark and when the moon is covered by clouds, it gets even darker.  On Halloween the dark opens a door releasing things into the night; shivery things like skeletons.

Surrounded by boisterous, bony bodies who want him to do stuff that skeletons do, Gus reveals that he is a boy dressed up as a skeleton.  Yikes!  Gus is in trouble now.

As the clouds pass from the moon and the wind stills a smaller skeleton runs through the air---it's Ella.  The bone clacking gang issues derisive remarks at the pair until Gus joins Ella barking, growling and howling.  In the distance answering howls are heard.

Everyone knows what dogs love best.

As Gus and Bone Dog, Ella, sit under the full moon together again, before vanishing, she tells him what she said before, "A promise made under a full moon cannot be broken."

Eric Rohmann reminds us through his spare but clever text paired with heart-warming, joyous, sad, spooky and humorous visuals, which truly tell a story of their own, that some bonds are never broken.

I love absolutely everything about this book. It's about loss, friendship, love, promises and it's about the unexpected that can happen on Halloween night.
Posted by Xena's Mom at 11:15 AM