I own, enjoy and treasure these books, The Gift of Nothing, Art, Just Like Heaven, Hug Time, South and Wag! by author/illustrator, Patrick McDonnell . McDonnell is the brilliant artist of the acclaimed Mutts comic strip.  He is passionately involved in organizations for the protection of animals and the preservation of our planet, Earth. Having admired Dr. Jane Goodall, McDonnell read her autobiography, Reason for Hope:  A Spiritual Journey.  In that autobiography is a picture of her holding her childhood friend, Jubilee, a stuffed toy chimpanzee.  That was the spark for the fire that became Patrick McDonnell's beautiful title, Me...Jane.

I think I've mentioned before that I am one of those people that take joy in the entire package known as the book.  For me the book jacket is like the ribbon, the cover is like the wrapping paper, the endpapers represent the box and inside the box is the story.  Me...Jane is a true representation of the saying, a book is a present that one can open again and again. 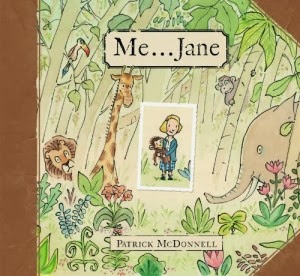 Warm, soft, amber-toned  watercolor illustrations spread across a cover that imitates a journal, scrapbook or photo album beckoning the viewer to be part of something personal. Jane is in the center with the animals looking at her but at this point she is not part of their environment but a photograph.

In removing the jacket the cover maintains the journal, scrapbook or album motif but instead of McDonnell's portrayal of Jane the photograph that inspired this book is pictured among naturalistic engravings from the 19th and 20th century with two tiny touches of McDonnell's own artwork.  The endpapers are the same comforting brown color as the book's corners and spine with an additional light brown done in an African tribal design.

McDonnell begins Jane's story with the gift of Jubilee.  Jubilee is ever at her side as she roams outdoors watching with keen eyes all the life big and small in her world as a young girl.  By reading books she increases her knowledge at every opportunity.  He highlights her observation of a chicken laying an egg; which answered her question on the origin of eggs.

For most of the book McDonnell has the engravings stamped beneath the text on the left with his original illustrations on the right.  It is his two page spreads that are so endearing, memorable and uplifting.  There are four; two with his own artwork, the third a combination of engravings and his watercolor and India ink visuals and the fourth is Jane's original drawings as a young girl for her club, The Alligator Society.  It is the second of the four that is the book's center; Jane is shown climbing her favorite tree named Beech on the right with engravings on the left that bleed across the center.  It is this blending of the precise with the creative that McDonnell says accentuates Jane Goodall's character as a scientist and an artist.

As this part of Jane Goodall's early life is told to us by McDonnell it will become clear through his specific word choice, that gift he has of saying so much with so few words, that Jane made her dreams come true and she did it with heart.

She would lay her cheek against its trunk and seem to feel the sap flowing beneath the bark.

For those fans of the Tarzan stories by Edgar Rice Burroughs, yes, this book's title is a result of Jane's fondness for those tales.

Take a moment to enter the life of young Jane Goodall as told to us in words and pictures by Patrick McDonnell.  This is not just a biographical portrait but a tribute to a woman who has inspired many and will continue to do so for generations to come.

At the book's end is more information about Dr. Goodall, a letter from her and a piece of artwork, a cartoon, that she drew.  By clicking on Patrick McDonnell's name you are linked to his books' web site where there is a video interview with him about Me...Jane. If you click on Jane Goodall's name the link will take you to her web site for the Jane Goodall Institute.
Posted by Xena's Mom at 8:42 AM