Matthew J. Kirby has penned a debut novel that is brilliant and breathtaking, The Clockwork Three.

Initially we are introduced to Giuseppe, a busker making a living by playing violin on the streets of the teeming city.  From his native country of Italy, he was sold by his Uncle to Stephano, a cruel padrone who takes his earnings giving next to nothing in return.  As the story begins Giuseppe has just found a green violin floating in the harbor after the wreck of a ship.

The clear sound that spilled out of the green violin resonated off the walls.  It seemed to penetrate the alleyways and soar up the rickety wooden staircases clinging to the outsides of the buildings.  It cut through the street noise, the clopping hooves, the shouts, the factory machinery grinding away around the city.  It slid through all of that like a slender hand parting a curtain. ...The sidewalk traffic around him had paused midstride.  That time of day it was mostly men on their way home, greasy from work. ... The song acquired the autonomy of a living thing.  Giuseppe watched the invisible tune light on each passerby like a cherry blossom carried on a breeze.  The tired bodies, stooped and trod upon, rose up.  Their eyes, rimmed with dirt and yellow from smoke, filled with tears.

As the final notes are played and Giuseppe counts his money his spirits soar.  Maybe, just maybe, this green violin will help him get enough money for passage so he can leave this city in the United States and return home.

Frederick, who has a gift with gears apprenticed to clockmaker Master Branch, is prowling the streets looking for a piece of metal to continue work on his automation, a clockwork man.  With completion of this project he is sure that he will be accepted as a journeyman in the guild with the ability to have a shop of his own.  But Frederick is haunted by his past.

Prior to rescue by Master Branch, he slaved at the looms with the rest of the orphans suffering terrible physical and mental abuse at the hands of cruel Mrs. Treeless. He yearns for an explanation as to why his mother, whose name he does not know, left him there.  As Giuseppe has found the green violin Frederick comes into possession of a missing bronze head which holds the key to his goal of independence and the importance of being the best at his craft.

The clockwork head, the Magnus head, rested peacefully.  Whether the name was accurate, and this was indeed the lost bronze head created by Albertus Magnus, was irrelevant.  The clockwork inside was all that mattered. ... Even though he had already seen it once before, the staggering workmanship drew a sigh out of Frederick.  He took several minutes, and just admired it without touching, without sticking his fingers in it. ...Frederick went to work with deliberate reverence, refusing to allow his excitement to rush him.  ... There was a larger pattern he was missing, like a painting that was too big to see all at once.  He could observe isolated figures and brushstrokes, but not the work as a whole.  The farther he stepped away from it, the larger the painting grew, as though this genius assembly of clockwork combined to become something greater than a simple combination of the parts would suggest.  An alchemy of arithmetic where two plus two equaled ten.

With a deep love of learning Hannah has had to give up her education to work as a maid at the Gilbert Hotel tolling through days which seemed as endless as the ocean.


In the early morning hours, Hannah read at the table by the dim light of dawn.  She leaned in close to the pages, chin resting on her folded arms, eyes racing over the words, like chasing butterflies over the hills, to catch as many as she could before going to work.  She wondered at how such tales of magic could be contained by mere paper and ink for her to read again and again.  Which she had.

It is that very day that upon hearing her supervisor, Miss Wood, speaking with the hotel manager, Mister Grumholdt, Hannah overhears them speaking of a treasure hidden in the hotel.  What that treasure, if found, could do for her family fills Hannah with fevered hope.  Since her father, a stonemason, was stricken with illness fear of losing their meager dwelling, having enough fuel to warm them or having food to stave of the specter of hunger stalks them each and every day.  But more surprises await Hannah in the form of an unusual guest and her protector which have arrived at the hotel.

Our three protagonists lives do intersect like intricate puzzle pieces each needing the other to complete the whole glorious adventure.  It is the building of their friendship, its challenges and triumphs, that gives them the strength and commitment to cooperate so each can realize their dreams exactly as the gears on a timepiece are required to do. 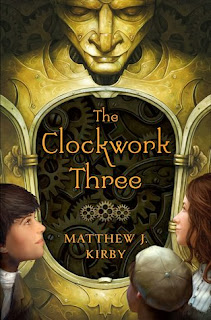 Truly the writing of Kirby is a thing of beauty as my numerous quotes clearly illustrate.  More times than I can mention I wanted to stop with a highlighter and underline a sentence or paragraph that created a particular scene in my mind.  This piece of fiction continually reminded me of a masterful, musical symphony with the notes, passages and parts blending to bring to the listener a sound with a hint of magic and a whole lot of majesty that will linger long after the final chord is struck.  Trust me, read the words, close your eyes and you will be there again and yet again as I was and will be.  This reader is waiting and wanting the next escapade by Matthew J. Kirby.
Posted by Xena's Mom at 9:34 PM