Most of us agree that at times the most unlikely character can be a hero coming in all shapes and sizes.  That word, hero, brings to mind varied expectations based on our needs and desires, individually or collectively.  Mike Lupica, best known as an outstanding sports writer, gives his readers in the book, Hero, what all want when that word is spoken or read------hope that the day will be saved; that a champion will shield them from dangers and defend all that is good from evil. 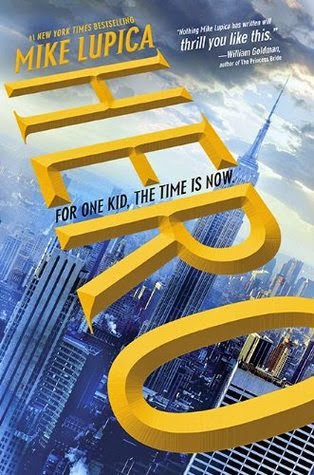 Tom Harriman, advisor to the President of the United States, is on a mission that not even the President is aware is taking place.  Deep inside the borders of Bosnia a Serb war criminal and part-time terrorist is about to be taken from his heavily guarded sanctuary.  Mission accomplished Tom is puzzled to see a figure walk on the runway as his plane takes off; a man with snow white hair barely showing beneath a cap pulled down low nearly covering his eyes.

What is this man doing here now when he should be clear across the ocean on the other side of the globe?  Tom knows that he should be ecstatic that his self-imposed assignment has been completed.. So why did I feel as if I were the one being chased?  Even up here, all alone in the night sky?

It seems that Tom Harriman's instincts were right.  He clearly was not safe from the Bads.  The Bads are enemies far more evil than anyone can imagine.

He told stories about them to his son Zach who thought they were fiction but they are the worst kind of fact.  Zach, on his way home to greet his Dad after this latest trip, is feeling compelled to not take his time crossing through Central Park as he usually does; anxious, uneasy and beginning to be scared he breaks into a full run toward his home on Fifth Avenue.  When the elevator doors open into his apartment his apprehensions are realized.  Zach is never going to see his Dad again.  He is never coming home again.

Fourteen year old Zach is changing, not just because of the loss of his Dad, but his physical abilities are growing as is his sense of impending danger to himself and those around him.  His defensive skills are becoming amazing.  He also knows in his heart of hearts that his Dad's plane crash was no accident but murder.  Will John Marshall ( Uncle John), family lawyer and his father's best friend, Kate Paredes, daughter of their paid housekeeper who lives with them or the mysterious man with the snow white hair help or hinder him in his search for the truth?  Who can he trust with the secrets revealed to him about his new superhero status?

Save yourself some time because once you start Hero you won't be able to stop as the precise, rapid-fire writing zings you toward the inevitable but startling conclusion.
Posted by Xena's Mom at 7:37 AM