Bold, Brillant Base, Graeme That Is...

Snailing Ship, rise and shine,
Hoist your sails and trim them fine,
Taste once more the salty brine,
For with this spell I make you mine!

The Legend of the Golden Snail written and illustrated by Graeme Base is his thirteenth book.  He began with My Grandma lived in Gooligulch, followed by Animalia which is to this day the most popular. 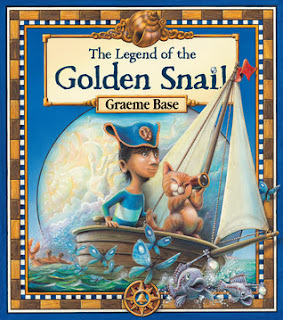 Wilbur's favorite book is The Legend of the Golden Snail.  No matter how many times he has heard it, he still dreams of its banishment to the Ends of the Earth where it is doomed to stay until released by a new master.

One fine day Wilbur decides to set sail for the Ends of the Earth with his cat as crew wearing a captain's hat made by his mother.  Along the way he waters a bush of blossoming butterflies wilting in the sun, cuts a net from a monstrous sea crab creature, and assists lantern fish whose light bulbs are being stolen by earwig pirates.
Slightly downcast by his progress and role as the Grand Enchanter Wilbur is assisted by a wind created by newly blossomed butterflies as he drifts in the Dreadful Doldrums, cut loose from the Slithering Sea by a friend returning a favor and during a frightful storm in the Maze of Madness lantern fish light his way to safety.


At last he reaches The Ends of the Earth only to find the snail no larger than a small pebble.  Still, arms held aloft, he chants the magical words that he knows by heart.  With wide-eyed wonder Wilbur watches as the snail grows and grows and grows complete with mast and sails.  Seeing the snail's chains and bonds he makes a decision.

Wilbur no longer wants to be the Grand Enchanter but the Gallant Captain.   He ties his boat to the back of the Snailing Ship and commands it to take him to its home, The Spiral Isles.  Do they sail on the ocean swells?  No, they sail skyward through a sea of clouds with more marvels to behold.  Upon reaching their destination the Gallant Captain (Wilbur) relinquishes his enchantment on the snail and receives a parting gift granting him a way home.

Nearly two years are spent on the illustrations for each of Graeme Base's books.  Their wild detail, imaginative creatures and places continue to enthrall readers of all ages.  True to form Base has a miniature book of The Legend of the Golden Snail embedded in the title page with end papers mapping out the journey in mystical soft colors

At the book's end readers are invited to go back to find the hidden snail 'n' crossbones in every picture.  When found it is suggested that a visit to Graeme Base's web site, highlighted at the beginning of this post, will bring the Golden Snail magically to life.  The web site itself is a colorful exploration of the author's career including several videos about this latest book.  Whether an old fan or new this book is a welcome visual feast for the eyes and imagination with the discovery of something different at each viewing.
Posted by Xena's Mom at 12:44 PM