Throughout our lives, regardless of our age, it's perfectly normal to set, accomplish and shift goals.  We greet each day working to fulfill these ambitions.  And we dream dreams outside of what we see as possible, elaborate ponderings dependent on miracles.  These keep us hopeful. 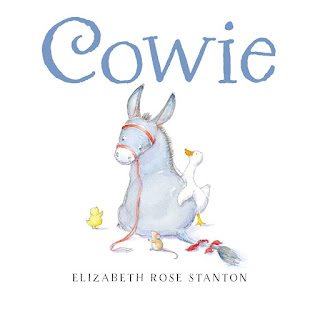 During these mental, and sometimes vocal deliberations, our closest companions endeavor to help us.  They elevate our hope into the realm of maybe-this-could-be-real.  Cowie (A Paula Wiseman Book, Simon & Schuster Books For Young Readers, January 7, 2020) written and illustrated by Elizabeth Rose Stanton is another charming, heartfelt title by a wise and talented woman who has given us Henny, Peddles and Bub.

Everyone called him Cowie
because Cowie loved everything about cows.

Their physical attributes and mental view of life were revered by this donkey.  More than anything else, their position in the grass,

the green, green grass
on their side of the fence,

was cherished by Cowie.  By grazing in the grass, they avoided carrying humans and other goods on their backs.  And they definitely didn't pull any wagons.

Cowie made up mind.  If he wanted to be a cow, he had to do cow-like things.  He tried several activities, but he still felt more like a donkey than a cow.  Then he tried to say MOO.  Yikes!  It came out backward.  No matter how many times he tried, the sound was reversed.  How does something like this happen?

His two friends, Duckie and Mousie, sensed their friend's sadness.  Their first approach was to speak their sounds in reverse, but this did not make Cowie happier.  They thought maybe something was physically wrong with Cowie.  Everything was checked from bottom to top.  He was A-okay except when he tried to moo again it came out

After a couple of ideas and more attempts, Cowie's two pals knew exactly what to do.  And they did it . . . with considerable effort.  And you, readers, will laugh and laugh and laugh.

When Elizabeth Rose Stanton brings another of her gentle, lovable creatures into our lives, we welcome them willingly.  In the persona of Cowie, we connect with the dilemma of wanting something which seems improbable.  As the reasons for his love of cows are told to us, we understand his desires.  Who among us has not wanted to emulate another, so as to be like them?  As the story progresses with a blend of narrative and conversation, we are utterly surprised and completely delighted with his two friends' resolution.  In fact, it's guaranteed you'll laugh out loud.  Here is a passage.

Everyone stopped chewing
and swishing and mooing
and looked at Cowie.

I am making too much of a donkey of myself, he thought.
I will never be a cow.

The use of white space as an element in this book is outstanding.  As you can see on the front of the dust jacket, even though the colors of the animals are soft, the white space lifts them up, as it does with the varnished title text. (All the animals are varnished on the front, also.)  To the left, on the back, an interior image from the book has been placed.  It is the scene which accompanies the text previously noted.  All the cows are looking at Cowie with astonishment.  Cowie's back is to readers, as he faces the group of cows.

The opening and closing endpapers are the same hue of blue as the title text on the front of the dust jacket.  (I am awaiting my hardcopy, so I am working with an F & G.)  Before the verso and title pages, Elizabeth Rose Stanton has placed a cowbell, looped with a pale blue ribbon, in the lower, right-hand corner.  This is a foreshadowing.  The image from the front of the dust jacket appears on the title page.

Rendered in pencil and watercolor, the illustrations are endearing and expressive.  Elizabeth Rose Stanton also adds labels to two of the pictures to place emphasis on Cowie's reasons for loving cows.  Her delicate lines, shading with the colors and facial expressions reveal her skill in using this medium.  Careful readers will notice the inclusion of two previous characters in one of her pictures.

The care given to details is marvelous.  When Cowie is sad, Mousie offers up a daisy and a tiny chick offers him a worm.  When Duckie and Mousie are examining Cowie for any physical problems, Elizabeth Rose Stanton's refreshing sense of humor is seen in this series of images.

One of my many, many favorite illustrations is on a single page with a crisp, white background.  Cowie is seated with his red halter hanging to the ground and his red-ribboned tail trailing behind him.  Duckie is seated in front of him with a wing raised in question.  The tiny chick is standing on his tail.  Mousie is on top of Cowie's head with arms raised in triumph with a glowing lightbulb above Mousie's head.  Cowie has his eyes raised up toward Mousie.

For readers who want a book to hug because they love the characters, one they'll want to read over and over, and one which will make them giggle, Cowie written and illustrated by Elizabeth Rose Stanton is a superb choice.  While we'll not always be who we want to be, good friends can lend a paw or wing to make even our most unlikely dreams a reality.  They'll have to add a healthy dose of silliness to the mix, too.  I highly recommend this title for your personal and professional collections.