Regardless of the continent, country or community, it is a routine repeated daily.  When parents are ready to rest, their children are not sleepy.  You would think after a day of nearly non-stop action the children would be tired, but the opposite is true.  The words, it's time for bed, are akin to a super surge of energy for little gals and guys. 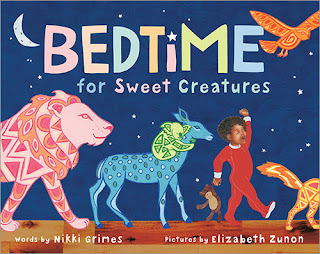 They will say and do anything to avoid going to bed. Bedtime for Sweet Creatures (Sourcebooks, Jabberwocky, January 14, 2020) written by Nikki Grimes with pictures by Elizabeth Zunon is a story of patient parental persuasions.  It is a story of the enchantment of love renewed each evening.

A child shouts as soon as their mother calls them to bed.  Employing a new tactic, mimicking the call of an owl, the child wants to know who has to go to bed.  In reply the mother carries the child's teddy bear to their bed believing the child will follow.  The child runs, climbs on the bed and sounds not unlike a bear.

Now beneath the covers the child cowers and speaks in a whisper, fearful.  Like a triumphant declaration, the mother calls out her assurances.  Further putting off the inevitable, the child implores like a king of beasts for Mother to look under the bed.

Now is the time for stories.  The child, motionless like an animal waiting, listens and then settles in for the wonder of once upon a time.  Even though the child is nestled deep under the blankets, they are restless and nervous as an animal who sleeps in nests among the trees.  Leaping up, they hug their mother one more time, clinging like a koala.

Each time the mother utters a sentence the child acknowledges her words by portraying, in the mother's mind, a well-known animal. Two final ploys and the child runs to bed.  Or do they? Wishing for sleep, the mother and father, now in their bed, hear a final but familiar sentence softly said.  Who is with them now?


No matter how many times you read this book, these wonderful words, written by Nikki Grimes, you'll find yourself hugging it at the end.  You'll want to put it under your pillow.  Having the story told by the mother is perfection.  Her combination of narrative and spoken words is as if she is telling her child this story the next day or as far in the future as when the child is now an adult.  Most important is the strong undercurrent of deep affection found in the words used by Nikki Grimes.  Here is a passage.

You yawn
and grind
your teeth like a
SQUIRREL,

ready to nibble the night.

I smile and
tuck you in tight.


The image shown on the open and matching dust jacket and book case spans from the back, the left edge, over the spine to the front, the right edge.  It is a majestic depiction of a tiger, bear, lion, fawn, koala, owl and a portion of a wolf.  The brilliant array of eye-catching colors and blend of realism with the culturally patterned animals is absolutely stunning.  The stars on the rich deep blue, with the crescent moon, mirror those found in our night skies, some forming constellations.

On the opening and closing endpapers is a repeating pattern of five vertical stripes of paper.  They are in shades of blue with some green, gray and gold.  They represent the many moods of the story and of the night. (They appear again as the fabric for the parent's quilt.)  On the title page, the animal featured is the back portion of the tiger.  It's a continuation of the tiger from the back of the jacket and case.  The varnished title text, moon and some stars shown on the jacket is repeated here.

the pictures by Elizabeth Zunon shown as full-page illustrations at the beginning and end and double-page visuals throughout the book present realistic characters and settings.  The inclusion of the animals, life-size, is a striking contrast.  Elizabeth Zunon's color choices are complementary.  Each illustration elevates the text, sending the lyrical words out to wrap around readers in warmth.

One of my many, many favorite images is when the mother is carrying the child's teddy bear in her hand and walking down the hallway toward the child's bedroom.  As a background for most of the double-page picture, except for the wood floors along the bottom, an elegant wallpaper is shown in hues of dark blue.  The mother is striding along, wearing a lighter blue top, pink bottoms and blue slippers with white pom-poms.  She is on the left side.  On the right side is the toddler in their red pajamas running with an arm outstretched.  Between the background and the mother and child is the bear.  It's enormous; spanning from two-thirds on the left to a little more than half on the right.  It, like all the animals, is contented and walking.  It is colored in shades of blue, turquoise and a spring green.  The pattern on its body looks ancient.


This book, Bedtime for Sweet Creatures, written by Nikki Grimes with pictures by Elizabeth Zunon is a work of art.  It presents a timeless story through a fresh perspective.  I highly recommend it for your personal and professional libraries.  (On a more personal note, when I visit my hair stylist, I always talk about books with her, even bringing titles to show her.  Yesterday, she was telling me about a book her daughter picked out at the public library.  They have read it multiple times and loved it.  It is this book.)