Late Thursday night in the eastern daylight time zone and in the early hours of Friday morning, you could see a movement swell. It traveled across our planet from place to place as the day September 20, 2019 dawned.  This outpouring of support for the Global Climate Strike clearly demonstrates the power of a single soul to rally people around a worldwide crisis. 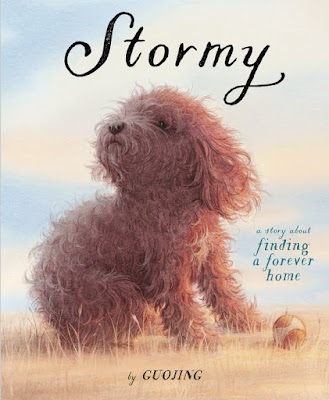 While the efforts of this sixteen-year-old Swedish girl, Greta Thunberg, have rightfully drawn international attention, there are other champions, single souls, who without any notice, change a life (or lives) for the better every day.  These unsung heroes walk among us, displaying compassion for those who do not have the ability to care for themselves.  They see what is needed and respond accordingly.  Stormy (Schwartz & Wade, September 17, 2019) conceived and illustrated by Guojing (The Only Child, Schwartz & Wade, December 15, 2015) is a striking depiction of kindness steadfastly delivered and eventually received.  It is about being lost and found.  It is about having a place to call home.

Without words this story begins and ends on the opening and closing endpapers.  On the first is a heap beneath a bench beneath a tree in a park.  Following this is a double-page picture for the title, verso and dedication pages, moving us closer to the bench.  A small curly-haired dog is sleeping in a ball shape for warmth.

In a series of horizontal panels, a woman comes to the bench to read a newspaper.  The pup, afraid, runs away and watches her from a distance until she leaves.  As night falls, the homeless dog is again under the bench.  As the tale continues in a collection of horizontal panels, some nearly perfect squares, the woman returns the next day with a ball for the dog.  She carefully tries to get it to play.  The dog runs away.  The woman leaves but does not take the ball.

On the third day a cautious game of throw and fetch takes place between the woman and the hesitant stray.  As the sun starts to set, there is still a distance between them.  The woman leaves to head back to her home in the city.  She does not know the dog, ball in its mouth, is following her at a safe space.

After the woman walks through her door, the dog sits outside, as if willing her to look out her window and discover it there.  It gets darker and darker and begins to rain.  The shower turns into a full-blown storm with flashes of lightning and thunder.  Drenched and shaking, the pup seeks shelter in a soggy cardboard box by the doorway, leaving the ball on the sidewalk.

Within the final seven page turns, readers will feel their hearts racing.  They will want to call out to the dog and the woman.  You can't help but sense the deep desperation filling both these beings.  You wonder and wish.  And then . . .


Without words we still comprehend everything through the striking visuals created by Guojing.  Each moment is portrayed exquisitely and explicitly to the point the words appear spontaneously in our minds and are engraved on our hearts.  This connection through art begins on the front of the dust jacket.  The pup's stance is assured but seeking.  The ball is a symbol of patience, kindness and acceptance.  The luminosity seen in the clouds is a technique used throughout the book to supply warmth or the hope of warmth.

To the left, on the back of the dust jacket it's night in the park.  The dog is sitting in front of the bench with the ball on the ground in front of it.  Fireflies sparkle among the grass as a few stars twinkle in the partly cloudy sky.  A crescent moon glows on the right.  The dust jacket is covered in a deep midnight blue.  The only element other than the author's name, the title and publisher's logo on the spine is a silver dog tag on the front.  It reads STORMY above an etched dog bone.

As stated earlier the opening endpapers start this story and the closing endpapers end the story at the same place with noticeable differences.

The illustrations were rendered in pencil and watercolor and compiled digitally.

Each panel in a group of panels on a single page directs our attention to a specific moment.  The panel sizes vary to place emphasis on those moments.  Our eyes move from each one to the next, forming an emotional connection between us and the woman and the dog.  For dramatic effect Guojing has full-page and double-page pictures.  They wrap around us, making us a part of the narrative.

Each of these panels are also a layer to the story.  We can perceive something growing.  The skies behind the woman,  the dog and each setting are also indicative of changes.  The use of light and shadow is masterful by Guojing.  As the rain begin in earnest a streetlight shines on the dog waiting outside the woman's home.  The only other light is from her window.  All other windows are dark.  As the storm intensifies the darkness with little light formulates one vivid scene after the other.

One of my many, many favorite illustrations is a double-page picture.  The tree near the park bench extends up the left side with one branch moving along the top and across the gutter almost to the bench.  Two birds fly in a glowing sky.  Next to the tree the small dog sits with the ball between its paws.  Almost next to the bench the woman sits, knees drawn up and held by her arms.  The two watch each other carefully.  You know they both desire to be closer.  The one has survived by being cautious but needs love and the other has a great deal of love to give but doesn't want to frighten the other.  You have to remind yourself to breathe looking at this picture.


If reading the dedication

For my lost dog, Dou Dou.
I miss you.

does not bring tears to your eyes, there will be other moments when you will burst into sobs.  But . . . in this book, Stormy conceived and illustrated by Guojing, despite every circumstance, we find ourselves believing in miracles.   We find our tears turning to joy and true contentment born of love.  I recommend this book with all the stars for your personal and professional collections.