Even the most easygoing individual cannot maintain such a demeanor consistently and constantly.  For there resides in each being a wildness.  Although it usually waits to be called, sometimes it bursts forth unbidden.  It has a craving; a craving needing to be satisfied. 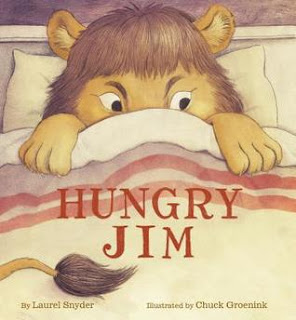 At the appearance of this ferocity, there are usually two choices.  You can either succumb or decide to fight back the urge.  Hungry Jim (Chronicle Books, September 3, 2019) written by Laurel Snyder with illustrations by Chuck Groenink portrays a young boy whose morning begins not exactly as planned.

When Jim woke up on Tuesday,
his tail had fallen asleep.

What Jim finds strange about this circumstance is he has no recollection of having a tail.  When his mother announces pancakes for breakfast from the kitchen, Jim's stomach responds with a distinct grumble.  It's not for the promised pancakes, but for his mother.

In their conversational exchange from upstairs to the kitchen, Jim declares he is not yearning for pancakes.  Looking in the mirror, Jim sees a beast, a king of beasts.  As he approaches the kitchen, Jim is decidedly conflicted.  He does not want to consume his mother, but that's all he intensely covets.  So, he swallows her, all of her.

This does not leave him feeling quite right, but his appetite is far from satisfied. Leaving his home and running down the street, he munches and swallows a variety of bystanders and shop owners.  He feels remorse but the wild hunger inside him will not calm.  His frustration at his behavior and his stomach's desire for whatever it wants grows.

He races from his community and roams in a nearby forest until he comes to the edge of a cliff overlooking a stormy sea.  As Jim is thinking about this dilemma, he hears another growl.  This time it is not his stomach but something as big, beastly and hungry as he is.  It appears that the consumer is about to be consumed.  Given the activities of Jim's morning, several events follow.  Perhaps you believe you know what will happen, but with this author's and this illustrator's combined skills, it's doubtful.  Be prepared to be delightfully dazzled.


After reading the first three sentences written by Laurel Snyder, readers know this is a book full of surprises.  They also quickly realize a truth is being presented.  Through the narrative, Jim's thoughts, and conversations with his stomach, as well as other characters, all liberally seasoned with humor, we find ourselves completely captivated by Jim's predicament.  This is masterful storytelling because there is never a moment when we are not present in this tale, invited by every word.  Here is a passage.

"I don't feel much like a pancake today," called Jim.

"Well, what do you feel like?" asked his mother.

Jim stared into the mirror.


Little do readers know when looking at the front of the dust jacket, the Jim referred to in the title is not a lion but a little boy.  By the look in his eyes, he's about ready to spring into action.  The title text is raised and varnished.  To the left, on the back, readers are given a view of the dark, forbidding forest where Jim makes several decisions.

When removing the jacket, the book case is an extension of the back scene on the jacket.  More gnarled trees fill the right side and stretch off the top of the case.  In two trunk hollows, one on the left and one on the right, tiny glowing eyes watch readers.  (This image is shown on Chuck Groenink's website.)

On the opening and closing endpapers the canvas presents as lion's fur.  With a page turn, we are standing outside Jim's bedroom door in the hallway.  The title is posted as a sign on his door.

Chuck Groenink rendered these remarkable illustrations, on heavier, matte-finished paper, throughout the book

in pencil and Photoshop.

He complements and elevates the story with every picture.  The text never mentions the word lion.  It does not mention the details seen in every scene; pictures on walls, the kitchen appliances, shelving and contents, the architecture of the buildings in the town, or the names of the businesses.  (Humans with canine companions will understand the elements in one particular picture.) It does not mention exactly what happens after Jim makes decisions in the forest.  The pictures tell us more.

These illustrations vary in size to accentuate the pacing.  Several are wordless but nonetheless very powerful.  Sometimes we are given a larger view, or we may be closer to Jim.

One of my many, many favorite illustrations is a double-page picture.  On the far left is the stairway with Jim as a lion ready to pounce as he peers around the edge.  Completely unaware is his mother standing in the kitchen at the stove, making pancakes.  The kitchen area covers a full page on the right, crosses the gutter and continues to a fourth of the left page.  The colors in the kitchen are subdued in creams, a shade of green and hues of blue and rust.  The table is set for two.  A cat is curled on a chair seat, sleeping.  The kitchen window is wide open.  This image is loaded with anticipation.


This book, Hungry Jim written by Laurel Snyder with illustrations by Chuck Groenink, is sumptuous when read silently but as a read aloud, with an individual or with a group, it is an exquisite feast for readers' minds and hearts.  At the close of the book, opposite the publication information, is the dedication.  If readers have not already seen this title as a tribute to the one and only Maurice Sendak, Laurel Snyder and Chuck Groenink make this clear with their words. I highly recommend this title for your personal and professional collections.

To learn more about Laurel Snyder and Chuck Groenink, please follow the links attached to their names to access their respective websites.  Laurel Snyder has accounts on Facebook, Instagram and Twitter.  Chuck Groenink has accounts on Instagram and Twitter.  Author, reviewer and blogger, Julie Danielson highlights this title on her site, Seven Impossible Things Before Breakfast, with loads of artwork.  Laurel Snyder is interviewed about her work at Publishers Weekly on August 15, 2019.
Posted by Xena's Mom at 9:57 PM