They stand alone day in and day out for months and even years.  They never utter a single word.  Creatures of the field and forest give them a wide berth.  They are made to spread fear, especially in birds.  Birds that would eat a farmer's freshly seeded fields or crops waiting to be harvested are not welcome. 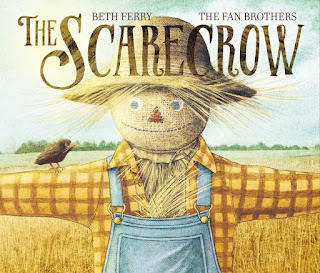 Perhaps this is why these creations are given the name scarecrow.  This is a lonely, dismal task even for a being with seemingly no feelings.  The Scarecrow (Harper, an imprint of HarperCollinsPublishers, September 3, 2019) written by Beth Ferry with illustrations by The Fan Brothers (Eric Fan and Terry Fan) focuses on one scarecrow.  This scarecrow decides to alter its purpose.

As expected, the fox, deer, mice and crows stay a safe distance from this man of straw standing near a tree in the field.   The fall season passes, and winter settles her cloak of snow on the surrounding fields.  The scarecrow does not have a single soul to keep him company.  He longs for spring.

Upon its arrival spring brings a surprise to the scarecrow.  A small crow drops at his feet.  Then Scarecrow, like spring, does something surprising.  He breaks his pole, bends down and scoops up the fallen baby.  He fashions a cozy nest from his hay and clothing.  He croons sweet songs to the feathered child.  Wounds heal and two hearts become one in friendship.

When the tiny bird learns to fly, Scarecrow understands the bird will leave and he cannot follow, but he nevertheless encourages the fledgling.  Summer and autumn come and go.  Winter brings cold and snow.  Scarecrow is alone, now leaning forward on his broken pole.  Sadness settles like a weight in the straw man's heart.

Moving through an early spring rain something, a bigger something, drops near the scarecrow.  Unbidden Scarecrow opens his weary arms.  Wounds are healed and two hearts rekindle a lasting friendship which as seasons and time dictate multiplies one heart at a time.


Like a melody you want to hum all day long, the words penned by Beth Ferry in this narrative implore you to read them over and over, savoring every beautifully written thought and emotion.  Her rhyming flows flawlessly.  The placement of her words from page to page supplies us with pacing that is perfection.  She alternates between short two-word punctuated phrases and longer sentences.  Repetition of key words ties portions together neater than a bow.  Here is a passage.

He tucks him near his heart of hay.
He lets him sleep.
He lets him stay.
He doesn't stop to wonder why.
He sings the sweetest lullaby.


When you run your fingers over the open dust jacket, the texture feels like the cloth on the scarecrow's shirt or denim overalls.  The scene drawn by artists Eric Fan and Terry Fan, The Fan Brothers, evokes the feel of fabric, hay, burlap and the sounds of rustling grasses in an open field.  We are left wondering why the scarecrow is smiling at the tiny black crow.

This initial picture on the front of the dust jacket continues over the spine and to the back, on the left.  Scarecrow's hand points to another field and a line of trees.  In the near distance is a barn and windmill.  Clouds softly billow in this sky, too.  The crow in different sizes is shown on the front and back flaps.  The details here, on the dust jacket, and throughout the book are marvelous.

The same surface feel on the dust jacket is used on the book case.  This is a portion of the overalls, all denim on the front and back with two exceptions.  On the left is a green plaid patch.  On the right is a rusty red-orange plaid patch.  These match the patches on Scarecrow's legs.

On the opening and closing endpapers is a canvas of olive green.  On the initial title page, a full-grown crow is perched on a post with barbed wire stretched on either side.  On the formal title page, a luminous landscape greets readers.  Sun-kissed clouds, some pinkish-purple and other golden brown, span above a field across a double-page picture.  The sun low to the horizon radiates from the gutter on either side.  On the right, Scarecrow stands tall near the single tree.

these illustrations, double-page pictures and full-page pictures (five), are in a word, breathtaking.  With authenticity they portray the seasons and emotional moments experienced by the scarecrow and the crow.  They give us vast pastoral panoramas, move in closer as in the fireflies fluttering around the field on a full moon night as the crow sits on Scarecrow's arm or zoom in on Scarecrow's face after the crow leaves.

One of my many, many favorite pictures is for the words quoted earlier.  The canvas is white on matte-finished, heavier paper, edge to edge on two pages.  Seeds spin and parachute from the left and right of Scarecrow on the left side, cross the gutter and sail along the right above the text.  Scarecrow has his head bowed, a contented smile on his face and his arms are crossed in front of his heart.  Nestled in hay and tucked in the bib of his overalls is the tiny black crow.


This book, The Scarecrow written by Beth Ferry with illustrations by The Fan Brothers, is one to read when discussing friendship and the lengths a friend will go for another, talking about seasons, or addressing how sometimes it's necessary to break away from what is expected to follow what is right and in our hearts.  I know this will be a book cherished by readers and listeners alike; a true storytime favorite.  I highly recommend this for your personal and professional collections.  You might want to pair this with Otis and the Scarecrow written and illustrated by Loren Long.

To discover more about Beth Ferry and The Fan Brothers, please access their respective websites by following the links attached to their names.  The Fan Brothers have interior images from this book at their website.  Beth Ferry has accounts on Instagram and Twitter.  Eric Fan has an account on Twitter.  Terry Fan has an account on Instagram. At the publisher's website are printable activities.  Beth Ferry writes a guest post at Scholastic's Ambassador of School Libraries, John Schumacher's blog, Watch. Connect. Read., to reveal the cover.  Enjoy the book trailer.