Before you hear the clicking of toenails on floors, the jingle of metal tags announces a shift in position.  Their intention is to be as close as possible to you.  Comfort is a consideration but the bottom line is they want to be with their human.  We need them.  They need us.  We are better together. 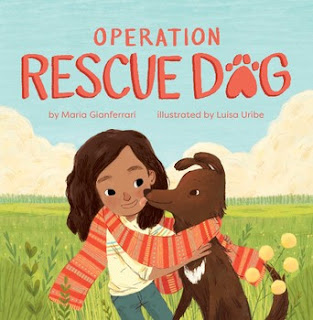 The attachment between a dog and their human is remarkable for the reason we simply can't believe how steadfast their love and loyalty truly is.  It is humbling.  Operation Rescue Dog (Little Bee Books, September 18, 2018) written by Maria Gianferrari with illustrations by Luisa Uribe is about finding home in the heart of a dog and in the heart of a human.

Alma's mother is in the military in Iraq.  Alma has not heard her voice in three months.  They write letters but the exchanges between them take a long time to be delivered.

Lulu, an abandoned dog, with a half moon on her chest eats acorns and drinks from mud puddles to survive.  She is alone for weeks until she is saved.  Alma has an idea.  As a surprise for her Mami, she and her abuela are traveling to the Operation Rescue Dog site.

It is not a trip without setbacks for Alma and her grandmother and for Lulu.  Abuela and Alma are stopped by the side of the road.  A tire is flat, it storms and they wait.  Lulu waits too.  She is frightened of the unknown and the big truck.  When it stops, she runs.

First there is a sandwich and then joy.  First there is a rainbow and then hope.  A truck pulls into a parking lot.  A blue car joins other vehicles.  Dogs embark, hearts beat and the smell of home fills the air.


In a truly heartwarming portrait the words of Maria Gianferrari ring with authenticity.  Two parallel lives are depicted in alternating voices. Rich, sensory descriptions reference color, touch and smell.  Readers can easily identify with both the girl and the dog.  Here are two passages.

Abuela paces on the phone.
Alma plucks dandelions.
The air smells like rain.
The blue car must wait.


The opened dust jacket features both Alma and Lulu.  Mami's scarf is wrapped around both of them

Their affection for each other is evident.  To the left, on the back, the two of them are lying on their backs in the same grassy field surrounded by yellow dandelions.  The scarf supplies a literal connection.  With eyes closed, they are completely content.  A caption reads

Using the colors from Mami's scarf, illustrator Luisa Uribe forms a scene on the opening and closing endpapers, this image features multiple dogs and humans at the site of the arrival of the Operation Dog Rescue truck.  You can readily imagine all the chatter and barking dogs.  In the first picture Alma and her abuela are running from the upper, left-hand corner.  Mary with Lulu waits in the lower, right-hand corner.  On the final endpapers there are subtle differences.  Many forever moments are being forged.

Luisa Uribe uses double-page pictures and single-page visuals to showcase first Lulu drinking from a mud puddle on the title page, to the Operation Rescue Dog truck driving down the highway at sunrise and then beginning the narrative on another two-page illustration highlighting Alma in her bedroom.  In Luisa's delicate details more of the story is told.  There is a picture on the wall of Alma and her mother in a military uniform.  In the following two-page illustration we see Lulu in various positions in the dark of night, alone and finally howling at the moon.

To supply readers with insight into emotional moods of both Alma and Lulu the point of view is shifted.  We are brought near to Lulu with her tail curled under her body in fear as she awaits her fate.  We are shown Abuela looking at the flat tire and Alma seated in the back.  Their car looks small compared to the vast landscape behind them.  Just as we have the wordless image at the front of the book of the truck on the highway, a second wordless illustration closes this book.  It's perfect.

One of my many favorite illustrations is on a single page.  The Operation Rescue Dog truck is speeding down the highway.  We zoom in on the cab.  Lulu in Mary's lap is leaning out the open window.  Birds fly overhead.  Billowing clouds nearly fill the blue sky above rolling hills.  Along the bottom the grass is dotted with flowers.


Readers and listeners will find themselves drawn into the story of Alma and Lulu in Operation Rescue Dog written by Maria Gianferrari with illustrations by Luisa Uribe.  By alternating the perspectives in both the narrative and pictures we are immediately tied to both the girl and the dog.  We cheer with all our hearts for the resolution.  At the close of the book Maria Gianferrari shares the story of her beloved rescue dog, Becca, as well as explaining more about rescue dogs (and rescue animals).  She includes websites and other options to assist in helping these animals.  A glossary of Spanish words used in the story is added at the end.  You'll want to have this title on both your personal and professional bookshelves.

To learn more about both Maria Gianferrari and Luisa Uribe and their other work, please follow the links attached to their names to access their websites.  Both Maria and Luisa are on Instagram.  Luisa maintains an account on Twitter.  Maria is featured on As the Eraser Burns.  Luisa is a guest on KIDLIT411.  At a publisher's website you can view interior images. 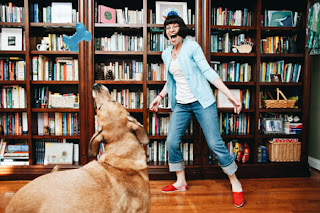 Maria Gianferrari loves dogs, especially her rescue dog, Becca.  She loves them so much that all of her fiction picture books published thus far contain a dog main character!  As an animal lover, Maria has been rescuing creatures unofficially all her life.  Her most recent rescue was a five-lined skunk stranded in her cellar.  She lives in Leesburg, Virginia with Becca, her scientist husband and artist daughter.