Every single day with every breath they take people from all walks of life are striving to mend things which are broken.  These things cannot be fixed with super glue, a hammer and nails, or scissors and tape.  They are made whole with courage, persistence, intelligence, compassion and sacrifice. 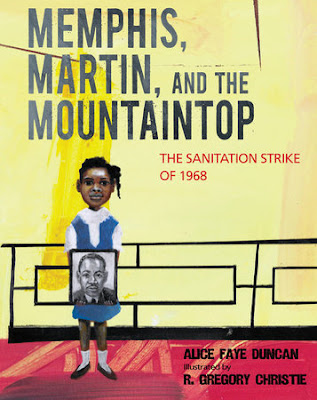 Efforts by those trying to repair a breach in what should be and what is often work in anonymity. Other times we are aware of the struggles even if they are in another part of the world, country or area in which we live.  They are headlines on the evening news. They have a place in human history.  Memphis, Martin, And The Mountaintop: The Sanitation Strike Of 1968 (Calkins Creek, an imprint of Highlights, August 28, 2018) written by Alice Faye Duncan with illustrations by R. Gregory Christie depicts an event with unforgettable results.

MEMPHIS---1968
I remember Memphis.
I remember the stinking sanitation strike.
Alley cats, rats, and dogs rummaged through piles of trash.
Black men marched through Memphis with protest signs raised high.
I also marched in '68 with red ribbons in my hair.

Fifteen memories of moments are recalled through the first person voice of a little girl in poetry and prose.  Following an initial introduction, a parallel is made between two storms the day two sanitation workers, Echol Cole and Robert Walker, died.  The first is a rain storm and the second is a strike.

Less than two weeks after the workers' deaths and repeated failed negotiation attempts with Mayor Henry Loeb, workers numbering 1,300 left their jobs and marched from February 12, 1968 to April 16, 1968.  Money was tight beyond imagining; no lights and no telephone but help came. Organizations formed and organizations reached out in support.  Workers attended rallies and strategized.  At home wives asked and wondered how much longer will this last.

As Lorraine, the little girl, read the latest newspapers and magazines, given to her mother, a maid for a local family, her family learned of Dr. King's visit on March 18, 1968.  His speech bolstered the minds and hearts of all listeners especially when he set a date to return.  He did not come back, Mother Nature intervened.

On March 28, 1968 Dr. King and thousands of others gathered in Memphis to march.  It ended in violence on Beale Street.  Mayor Loeb called in the National Guard and a curfew was put in place.  Looking out your window and seeing tanks roll by was frightening.

On April 3, 2018 Dr. King returned speaking as a dreamer to all the dreamers in attendance at the church.  At the close of the next day at the Lorraine Motel Dr. Martin Luther King, Jr., crusader for equal rights and the eradication of poverty for workers, was assassinated.  Sadness trickled down people's faces then and later when forty thousand strong still marched in silence to honor a promise and the strike ended shortly thereafter.  We still weep today.


There will be books you read once, twice, three time and more because the writing compels you to do so.  This book written by Alice Faye Duncan is one of those books.  By having the events recollected by a nine-year-old girl with working parents, her father a sanitation worker and her mother, a maid, we have a personal connection.  We are not just reading about facts; we see everything through the eyes of a child directly involved.

The technique of breaking the narrative into fifteen separate reflections is brilliant in creating understanding and pacing.  Specific details of the conditions of the sanitation workers, the marches, the meetings, the impact on families' lives, the setbacks, the victories and Dr. Martin Luther King, Jr. bring us into this history. Here are portions of two passages.

When they could take the abuse no more, 1,300 men deserted their
garbage barrels.  They organized a labor strike on February 12, 1968.
In the morning and afternoon, for sixty-five days, sanitation workers
marched fourteen blocks through the streets of downtown Memphis.
From Clayborn Temple to the steps of City Hall, they squared their
shoulders, raised their heads, and carried their picket signs.
My daddy marched in that number.  He marched for better pay.
He marched for decent treatment.  My daddy marched for me.

He said, "All labor has dignity."
Dr. King's voice was loud and stirring.
I listened with my parents from a crowded church pew as the
famous leader drafted a plan to march in Memphis with the
striking men.
Dr. King set a date for March 22.
Daddy leaned toward Mama's ear.  He said, "We need everybody
to march that day."
Mama did not waver.
She assured Daddy, "I'll take off work.  You can count on me."
Then Mama patted my hand and said, "We will take Lorraine.
She can march with us.


When first looking at the front of the dusk jacket, you know this title is going to be intensely individualistic.  Placing Lorraine Jackson on the balcony of the Lorraine Motel draws up deeply into her story.  Children have the remarkable gift of getting to the soul of any situation.  They are unencumbered by past experiences. (I am working from a digital galley.)  On the title page striking sanitation workers, carrying blank and white picket signs, crowd beneath the title text.

All of the illustrations painted with Acryla Gouache by R. Gregory Christie span two pages.  Each is like a piece of art hanging in a gallery of pictorial history.  What readers will recognize initially are the facial features on the people portrayed.  They reflect an array of emotions.

In some of the scenes the elements are more abstractly depicted than being realistic representations.  At times the realism is so vivid you feel as though your five senses are awakened. When the sanitation worker is carrying a rusted barrel of garbage, it drips down on his clothes and person.  For the haiku Omen the snowy vista is stark, bitter cold and windy.

One of my many favorite illustrations is for the piece titled Black Widow.  The background like many of the images is a golden swirl of color.  On the left and right marchers wearing their best clothing silently form behind the dignified, majestic figure of Coretta Scott King. In contrast to those behind her, her clothing and facial features are most prominent.  It's an impressive portrait.


When you read Memphis, Martin, And The Mountaintop: The Sanitation Strike Of 1968 written by Alice Faye Duncan with illustrations by R. Gregory Christie you will be moved to tears more than once.  I expect as a read aloud the classroom will be as silent as the marchers through Memphis on April 8, 1968 before they burst with questions and comments.  At the conclusion of the title is an informative and detailed time line from January 1, 1968 to April 16, 1968.  A museum (National Civil Rights Museum at the Lorraine Motel) to visit is listed as well as sources and source notes.  I highly recommend this book for your personal and professional collections.

To learn more about Alice Faye Duncan and R. Gregory Christie, please access their websites by following the links attached to their names.  Alice Faye Duncan maintains an account on Twitter.  At a publisher's website you can view interior images.  At A Fuse #8 Production by Elizabeth Bird Alice Faye Duncan is interviewed along with a cover reveal.  Alice is also showcased at KidLit411 and LILbooKlovers.
Posted by Xena's Mom at 11:52 PM