A surefire technique to find the most popular books in a library is to locate those titles with the love-worn look.  The dust jackets and book cases are folded and creased.  Page corners are turned down multiple times.  There are numerous incidents of visual thumb and fingerprints smeared on pages.  One area of shelving containing these titles is the joke book section. 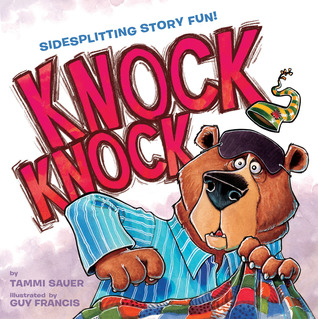 When children are on a joke-telling roll, there is no way to stop them.  And who would want to?  The sound of their laughter is contagious.  KNOCK KNOCK (Scholastic Press, July 31, 2018) written by Tammi Sauer with illustrations by Guy Francis is a total gigglefest.

KNOCK KNOCK
Who's there?
Justin.
Justin who?

A sleepy bear ready for hibernation is startled awake by words and a wood-carrying fox that enters his home.  He is Justin the neighborhood. (Insert a snicker and a happy groan here.) As the fox stacks the wood in the fireplace another double knock sounds at the door.

A trio of gabby blue jays arrives holding streamers.  The bear is less than thrilled with their wordplay and their presence.  Soon a raccoon stalks in through the open entrance looking like he's been working in his kitchen.  Bear finally closes the door and slouches against it only to have the now familiar words uttered once more.

To say he is frustrated is an understatement.  All the poor guy wants to do is go to sleep.  He craves sleep.  He needs it.  His annoyance is slowly starting to cross the line into anger.

When the next persistent tapping and rapping sounds on his door, Bear roars a reply.  Opening the door his next answer is gentler when he sees his visitor.  A super surprise is sprung on the unsuspecting bear.  What are friends for?  When the next season comes, the roles are reversed in a manner sure to have readers and listeners joining in the fun once more.


This is one of those books, when you know without a doubt; the author must have been laughing out loud at the possibilities for wordplay.  Tammi Sauer has a connection to her intended audience (and those who read this book aloud to others).  She knows which jokes invite the most participation.  You can easily anticipate the predictions shouted out by listeners at the pause before the final sentence in each exchange.  Here is another one.

KNOCK KNOCK
Who's there?
Ima.
Ima who?
Ima gonna huff and
puff and blow the
house down if you
don't open this door!


You know the feeling you get when something suddenly wakes you up in the middle of the night, the expression on the bear's face is exactly the way your face looks if you could see it.  His wild-eyed stare vividly displays his surprise coupled with a sense of dismay.  To the left, on the back of the dust jacket, Bear reluctantly makes his way to his door.  He is dragging his patchwork quilt on the floor and carries his pillow on one side and his toy teddy bear under the other arm.  His bunny slippers and striped sleeping cap complete the scene.  His ample stomach is visible between his pajama top and bottoms.

On the book case a portion of an interior illustration hints at the book's outcome.  On the opening and closing endpapers a combination of the words KNOCK KNOCK in varying sizes is shown in a design of black outlines on dark purple.  Clearly sleep is not in Bear's near future.  Illustrator Guy Francis starts his visual interpretation on the verso and title pages with Bear turning off his light, ready to drift off into hibernation.  He is barely awake.

A rhythm is established by the depictions and size of the illustrations.  Initially two single-page pictures with the introductory words of the joke are followed by a double-page image with the punch line.  Guy Francis broadens the pacing by following with another two-page visual.  Two single page illustrations allow for commentary by Bear.  As the narrative progresses the combination of text and picture size increases the tension.  The full-color images are bolder with wider outlines around the words.  This is pure perfection leading to the final knock-knock visitor.

One of my favorite illustrations is one of the final ones but to tell you about it would spoil the joy for you.  The details are charming with a capital C.  Another of my many favorite pictures is on a single page.  Bear is standing in front of the fireplace.  A happy-go-lucky fox in a flannel shirt is lighting the wood in the fireplace, flaming match in hand.  The three blue jays are merrily carrying streamers as they fly around Bear.  One of them grabs his teddy bear.  Nearly asleep on his feet Bear with a hilarious look on his face says


If you are seeking a title to talk about the shift of autumn into winter, a book about animals in winter, a tale about the power of friendship or a guaranteed funnier than funny story time winner, KNOCK KNOCK written by Tammi Sauer with illustrations by Guy Francis is the book for you.  Your readers will be talking about this for days.  They will be inventing their own knock-knock jokes which are a very good thing.  You will definitely want this title for your personal and professional collections.

To learn more about Tammi Sauer and Guy Francis and their other work, please visit their respective websites by following the links attached to their names.  Both Tammi and Guy have Twitter accounts. They both have accounts here and here on Instagram.  Tammi Sauer writes about this book on PictureBookBuilders in an interview with illustrator Guy Francis. You'll appreciate both her questions and his answers.