As soon as you step through the doors there is a subtle shift in the atmosphere.  It's a sanctuary softly sizzling with a myriad of choices. It offers an alternative to reality as well as presenting further understanding of that reality.  It sparks fresh ideas by expanding our perceptions.  We never know what we will discover even if we enter with a plan.  It stays the same but is constantly changing.  Many feel like it's coming home.  I count myself among them. 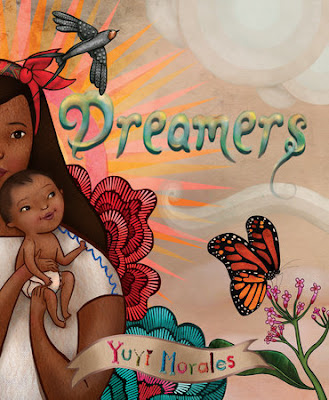 Each day as the doors are unlocked and opened there are those who return and those who enter for the first time.  Dreamers (Neal Porter Books, Holiday House, September 4, 2018) written and illustrated by Yuyi Morales recounts in a touching tribute, the first time she and her son Kelly enter a public library.   Her expressive words and illuminating illustrations serve to uplift all readers.

I dreamed of you,
then you appeared.

Speaking her truth Yuyi tells us of the birth of her son; their connection by life and love.  As a newborn she brings him from their town in Mexico to the United States.  She carries their gathered belongings in a backpack; each a symbol of what is valued most.  When the crossing is completed they become immigrants, migrantes.

Their language, Spanish, is not understood.  They do not yet understand English.  How can you not make mistakes?  They walk, exploring and learning, until one day they enter a place unlike any other.  As far as their eyes can see are books.

Through books a mother and son learn a new language, reading and writing unfamiliar sentences.  Now their stories are told to people in this new country.  Their hearts are strong knowing what can be.


The first person narrative of Yuyi Morales is written with passionate intention.  Straightforward, declarative sentences tell us her truth.  At times single powerful words define an emotional moment.  Spanish and English, a blending of two languages, represent the bridge being built between two worlds.  Here are several sentences and words.

You and I
became caminantes.

Thousands and thousands of steps
we took around this land,
until the day we found . . .

a place we had
never seen before.


The opened dust jacket completes the stunning partial portrait viewed on the front of Yuyi Morales and her son, Kelly.  Each element in this illustration, actually throughout the book, is carefully chosen, representative of something other than a bird or a butterfly.  Notice the expressions on the face of the mother and that of her son.  What is on the mind of each of them?  The mix of mediums and vivid hues fashions a multi-layered texture.

On the book case the image is identical except for one item.  The eyes of the child and his mother are closed in contentment.  The opening and closing endpapers are a rough, marbleized pattern like sandstone.  A two-page picture is supplied for the title page.  A young girl (Yuyi) has fallen asleep among her drawings next to her mother's sewing machine.  Above the cloud-like title text are stars and clouds.  There are also a few along the bottom of the page.

Numerous forms of media and techniques, as described in How I Made this Book, create these breathtaking and signature illustrations.  The embroidered flowers and leaves and text are marvelous.  Readers will wonder at the significance of the skeleton individual, the guitar, cloth heart with an eye in the center, and dog (perro) in the backpack.  Two volcanoes appear in the background.  What do they represent?

Each of the two-page pictures and a few single page images depict the effervescent spirit of Yuyi Morales.  Readers will notice the appearance of the monarch butterfly frequently.  They will note, too, the swallows, and snakes.  I'm confident they will take equal delight in seeing many of their favorite titles displayed in the scenes in the library.  How many of them can they name by the artwork alone?  How many of them have they read?  The tiny skeleton individual and dog actively participate in the activities of the child and his mother.

One of my many favorite illustrations spans two pages.  Yuyi and Kelly are seated on the left in the center of an enlarged flower (It was originally tucked in her backpack.)  They are happily reading a book which is only outlined for us.  On her back is the pack with the skeleton and eye looking over her shoulder.  A monarch butterfly is perched on the right corner of the book.  A volcano explodes in-between shelving.  A baseball is soaring.  A fire truck is roaring into the scene.  Books are scattered around them.  Fish and a shark swim from left to right.  A star, a crescent moon and a rocket ship hang in the background.  Along a curve on the right bottom is a bookcase with titles we can read.  The dog, to the front and right, has lifted its head and is howling.  One word is on the page.


This is a book for everyone, immigrants and non-immigrants, readers and non-readers, library users and those who've never been in a library.  Dreamers written and illustrated by Yuyi Morales is an invitation to change your life by entering a library.  It is a beautiful and brilliant ode.  It exudes hope.

To learn more about Yuyi Morales and her other work, please visit her website and blog by following the links attached to her name.  At the publisher's website Holiday House, you can view interior images (Limited Edition First Look), an event kit, follow links to multiple interviews and watch a video, Dreamers Video.  In addition Yuyi Morales is featured at Scholastic's Ambassador of School Libraries, John Schumacher's blog, Watch. Connect. Read., author, reviewer and blogger Julie Danielson's site, Seven Impossible Things Before Breakfast  (This post is priceless.), CBC Diversity and Shelf Awareness.  Yuyi Morales maintains an account on Twitter.  Enjoy this additional video.