No camping experience is complete without at least one night of star gazing.  During the summer in the northern hemisphere away from the city lights, the best time for viewing stars is before, during and after a new moon.  It is the darkest time of those short nights.  In 2018 there has been no lack of events to witness in our night skies. In fact in four days, the Perseid meteor showers will begin their amazing show. 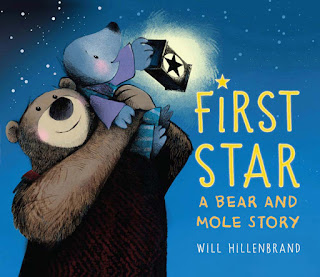 During a night of star gazing the topic of navigating by the stars usually makes its way into a conversation.  For those residing north of the equator, one particular star never sets.  It helps us all to find the four compass points.   First Star: A Bear And Mole Story (Holiday House, May 1, 2018) written and illustrated by Will Hillenbrand, a fifth book about these two lovable characters, takes us on a single night journey.  It's brimming with an explanatory tale, a revelation about an important constellation and the joy of an affectionate bond.

Looking up at the sky Mole has a question for Bear.  He wants to

see the stars turn on.

Bear replies with a suggestion of hiking to Camp Tiptop.  Mole gets their blanket (tent) and they both fill their backpacks with necessary items.

They climb and climb until getting to the top of this rocky mountain.  Once they are there, Mole has another question.  He is concerned about getting lost in the dark.  He decides he wants to go back home.  Again Bear answers.

Bear knows a good story can dispel fears.  He takes Mole back in time to First Father Bear, First Mother Bear and First Little Bear.  They lived as bears do today but at night, it was darker than the darkest dark.

First Little Bear and First Mother Bear make a large bright light with Earth's materials.  First Little Bear continues using more of Earth's materials spreading smaller lights all over the night sky.  Then First Father Bear does the most amazing thing of all. He gives a name to his accomplishment before doing one more thing.  As our two companions, Bear and Mole, gaze at the stars, the nighttime sky gives them a final surprise.


For our younger readers (and those young at heart) Will Hillenbrand has penned a narrative ringing true to their tender hearts.  First we come to understand the affectionate relationship between Bear and Mole. The comfort Mole feels in asking questions and Bear's patience in answering are indicative of this bond.

With ease, through their dialogue, Bear weaves a story of his own about the origin of celestial bodies.  Several of Bear's thoughts are downright profound.  At the conclusion Will continues by adding a bit of universal folklore about stars.  Here is a passage.

They shaped it into a ball.  The ball was Moon.
Moon shone brightly.

"Look, Bear, I
see a funny face
on the Moon!"
called Mole.


When you first open the matching dust jacket and book case, the friendship between Bear and Mole is apparent in the way Bear holds Mole and the ease Mole feels in Bear's arms.  The joy they feel at sharing this nighttime adventure is evident and shining in their happy expressions. You will come to understand the choice by Will Hillenbrand to depict his stars as small circular shapes but you will also notice the star on the lantern carried by Mole and the use of a star to dot the "I".

The starry sky extends over the spine to the left edge of the back.  An outline of Ursa Minor points toward our pals.  Readers will enjoy running their hands over the jacket to feel the textures.  The title text, Mole's lantern glass and the little bear on the back are raised and glittery.

A pale blue covers the opening and closing endpapers.  Beneath the text on the title page, Mole stands looking upward and holding his lantern.  On the verso and dedication pages, Mole crawls from under their blanket tent.  On the underside it is patterned in stars.

Rendered in direct impression and pencil most of the illustrations span two pages.  Several smaller images are grouped together to indicate the passage of time on a few pages.  During the telling of the origin story two of the pictures show the bears from the past larger than life in the sky with Bear and Mole seated on a log, much smaller and in the lower right hand corner.  Will Hillenbrand's shifts in perspective are marvelous.  His vertical two-page picture will have readers gasping. (So will the following two illustrations.)

One of my many favorite illustrations is the one for the text noted in the above passage.  It stretches across two pages.  An uneven faint outline in black frames the night sky on all four sides.  On the left First Mother Bear and First Little Bear are shaping the ball glowing in the sky.  They are standing on clouds.  On the right three evergreen trees rise in the meadow grass like black lace.  To the left of them sitting on a log are a smaller Mole and Bear.  They are looking skyward as if watching the work of the First Bears.  Mole's lantern glows on his left.


The marvelous charm of First Star: A Bear And Mole Story written and illustrated by Will Hillenbrand wraps around readers like a cozy blanket.  Perfect for a bedtime story, a story about friendship, and the origin of celestial bodies, this book will become a favorite. You might want to have a bear and mole puppet handy to try a reader's theater with your group of children.  You could also pair this with books about camping like Molly Idle's Camp Rex, or titles about nighttime exploration like Flashlight by Lizi Boyd.

To learn more about Will Hillenbrand and his other work, please visit his website by following the link attached to his name.  At the publisher's website you can access a lesson plan to use along with this title. Enjoy the videos.