When another being is close enough to share the air you breathe day after day for years, they are a cherished companion.  They are a part of who you are.  Your days are defined by the experiences you have together.  Others identify the two of you as parts of a wonderful whole. 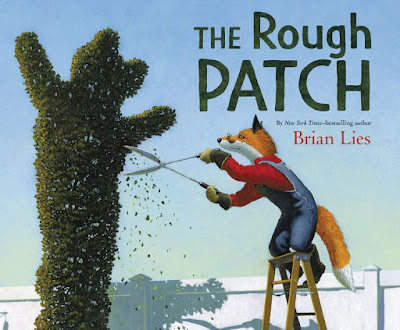 When, for more than one reason, you are separated the world feels in a word, wrong.  The sense of loss makes it hard to breathe.  In The Rough Patch (Greenwillow Books, an imprint of HarperCollinsPublishers, August 14, 2018) written and illustrated by Brian Lies this missing, essential element in a life is portrayed with gifted awareness.

Evan and his dog did everything together.

Their days were full of play, tasty treats, melodies and singing and all sorts of memorable travels.  Day and night, winter, spring, summer and fall, they did it all . . . together.  Their favorite place to be was Evan's garden.

This was no ordinary garden.  Oh, no.  Once something was planted here it grew and grew and grew.  It was magnificent.

One day Evan discovered his dog was not sleeping in his bed.  He was resting in death.  In a corner of their beloved garden, Evan buried his dog.  And everything shifted.

In his grief Evan no longer desired to be in the garden.  In fact, he destroyed it.  Cleared ground is an open invitation for seeds.  Weeds grew in place of his fabulous vegetables.  They fit his mood perfectly, so he gardened with these undesirable intruders.  Sorrow flourished.

Seeing a vine with

creeping under his fence, he was tempted to get rid of it but it, too, suited this dreary plot.  Giving it his usual care day after day, something happened, a big something.  Evan loaded up his truck, heading to the Fair.  On this day Evan felt another shift.  Nothing was going to be the same.


No matter how many times this book is read, if you've loved and lost, you will share in Evan's heartbreak.  Brian Lies writes using declarative sentences, brief but profoundly true.  He builds the relationship of Evan and his dog with sweet simplicity so when the dog dies we can't help but shed tears.  We know exactly of what he speaks.

When Brian tells us about Evan's destruction of the garden they loved, we understand completely.  As Evan helps the weeds to thrive the genius of the book's title becomes abundantly apparent.  Most of us have suffered a rough patch but how many of us have literally helped one to grow?

The introduction of the vine is a subtle alteration in the story.  We can feel something other than a vine growing.  It is an expectation of a change for the better.  Here are two passages from the book.

If Evan's garden couldn't be a happy place,
then it was going to be the saddest
and most desolate spot he could make it.

And soon it was.


When first opening the dust jacket readers are treated to a soft blue sky extending from left flap edge to right flap edge.  The snow white fence continues along the bottom.  An evergreen, a perch for a crow, tilts on the left side.  Nearby sticks act as braces for a bush.  Along the top edge of the sticks, a pair of scissors and a trowel hang to discourage unwanted nibblers. Evan is intently sculpting with his clippers.  On the far right a rake is propped against the fence.  This is a peaceful scene.  It gives no hint of the interior.  Is it before or after the conclusion?  (I am working with an F & G generously supplied by Brian Lies.)

On the title page, once again Brian, asks us to extend our thinking.  It is a breathtaking view of clouds in autumn at the close of a day.  Trees with leaves turning colors rise above the white fence surrounding the garden.  Evan's garden appears to be as it was in the beginning.  We are close to Evan as he gazes to the right.  Behind him is a large, large fruit (vegetable).  Toward the bottom of the fence is the shadow of Evan's dog.

each image is stunning, a beautiful study of light and shadow and shifting perspectives.  The use of color plays heavily in supplying a mood and depicting emotions.  Some of the pictures span two pages and others are loosely framed and grouped together on one or two pages.  Brian may inset one visual into another.  His use of white space will have you gasping.  The picture of Evan leaning over his dog's bed will break your heart in two.

I want to address the point of view seen from illustration to illustration.  We are drawn into the image of Evan leaning on his shovel, thoughtfully looking at his dog's resting place in the garden.  The line of the shadow invites us.  When Evan digs up everything in the garden, on the left he is carting armloads to a compost pile.  On the right a spading fork is so close; it's as if we are standing next to it.  On the day the vine comes beneath the fence the vine fills those two pages.  We see the shadow of Evan's hoe.  All we see of Evan are his garden boots with holes for his paws' claws.

One of my many, many favorite illustrations (I love all of them.) is of Evan at the fair.  It is a two page picture.  It is bird's eye view of an expanse of a certain kind of fruit gathered together. They are all huge.  A pathway winds between them.  Foxes of varying ages are walking on those paths.  Evan is speaking with two other farmer or gardener friends leaning against these prime garden-grown specimens.  It's when we know Evan is easing into a new normal.  We can hear the murmured conversations and feel the crisp autumn air.


Once you read The Rough Patch written and illustrated by Brian Lies you will read it again and again and again.  It allows us to understand how heartbreak can be healed.  It is simply one of the best books on loss.  I highly recommend it for your personal and professional collections for the excellence found in the text and illustrations.

To learn more about Brian Lies and his other work, please follow the link attached to his name to access his website. At the publisher's website you can view interior images. At The Horn Book Brian talks about this book.  Brian visits author, reviewer and blogger Julie Danielson's Seven Impossible Things Before Breakfast to talk about his process art.  Brian writes a guest post about The Rough Patch at 24 Carrot Writing.