Does it have a beginning?  Does it have an ending?  There is indeed a history attached to its measurement.  There are established methods of calculation.  How is it, then, the shortest amount can seem to last longer than the larger amount?  In other words, why can five minutes feel like five hours and why does eight hours seem to whoosh past in mere minutes?  Time is a constant, tick-tocking along, but it appears we can't capture it to fit our wants and needs. 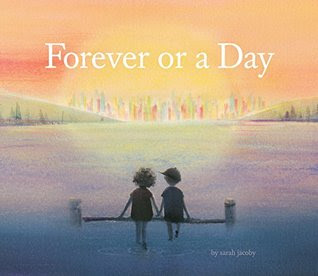 Each situation, each moment, in which we experience life determines the value of time.  Age figures in the appreciation given to time but children are known to have great insight into its preciousness.  Forever or a Day (Chronicle Books, March 27, 2018) written and illustrated by Sarah Jacoby is the detailed descriptions, careful musings and earnest explorations of the concept of time by a child.

If you look closely you can see it.

As a child looks out an apartment window a truck with TIMES on its side putters by on the empty street as the early morning sun's rays color the buildings.  He continues to assess time by realizing sometimes we take our time and in other situations it's gone before we have a chance to grasp it.  There are people who allow it to dictate everything they do.  Others go with the flow.

Suddenly forever vanishes.  You are greeted by those who feel the same anticipation. The entire day is shared from sunrise to sunset.  You wish, you hope with all your heart, time would stop.

The group gathers around a fire stretching the moments into longer rather than less.  A breathtaking starry vista spans above you until goodbyes are said.  It's a return, pajamas and bed but one final phrase is the true test of time well spent.


Every thoughtful sentence written by Sarah Jacoby in this title rings with realism.  These phrases are not long but a back and forth rhythm is supplied by the comparisons.  This child's assessment of time allows readers to bring into focus its many definitions. Here are two separate sentences.

It can be precise, like pouring the first cup of tea, or picking the perfect shoe.

Perhaps it is a ghost---
it can come and go
and you never even notice it was there.


The gorgeous dust jacket contains an image which goes from flap edge to flap edge, left to right.  On the left the golden sky with streaks of red hangs above a line of evergreen trees.  As this moves to the right the city appears between a basin formed before another row of trees begins.  In front of the trees and city you realize the large area is water.  The two children hands nearly clasping swing their toes and make circles in the water as they sit on the dock.

The book case is covered in a soft black with speckles of stars, one shooting across the sky.  A moon is rising on the horizon.  The children are in the same spot nearly hidden by the darkness.  The opening and closing endpapers are the same soft black with shades of purple and a bit of blue on the background.  Four rows show different phases of the moon.

A page turn portrays the TIMES truck moving along the street.  A rolled-up newspaper is tossed out.  Another page turn has the verso and title pages hosting a continuation of the city street as dawn slides into the city.  Someone walks a dog as street lights glow.

Rendered in watercolor, NuPastel, and mixed media these illustrations bring to mind a single word, hushed.  The use of the medium noted provides a soft texture.  Light and shadow are used masterfully.  Tiny delicate elements ask readers to pause.  Size of pictures and point of view varies giving us smooth pacing.  A wordless picture will have you gasping.


One of my many favorite illustrations covers two pages. On the left a glow is surrounded by a grove of trees.  Two bears are climbing among the trees.  On the right another glow, this from a bright crackling fire, lightens more trees.  Another bear, a group of deer and a fox move toward the people and music from a guitar.


No matter how often you read this book, Forever or a Day written and illustrated by Sarah Jacoby, you will feel the same.  As you read this a sense of deep calm builds within you.  The statements on time are like a lullaby.  I highly recommend this title for your professional and personal collections.

To learn more about Sarah Jacoby and her other work, please visit her website by following the link attached to her name.  (If Mulan could see the illustration on the first page of her site, she would be howling with joy.)  You'll want to stop by author, reviewer and blogger Julie Danielson's Seven Impossible Things Before Breakfast to view an interior image and to read her review at Kirkus.  Sarah's publisher Chronicle has a post titled 13 Questions with Debut Children's Book Author, Sarah Jacoby.  Sarah is featured at Professional Book Nerds podcast.  Sarah Jacoby has an account on Twitter and Instagram.