Besides delivering unconditional love twenty-four/seven canines have other distinguishing gifts.  They have the innate ability to make us laugh at their weird expressions and sleep positions.  They bark and run when they dream.  Some of them are constantly stealing socks, shoes and gloves or devouring paper toweling.  Many of them can give an excavator a run for its money with their digging habits. 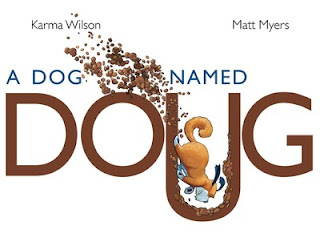 Dogs can create mounds of dirt and sand within minutes.  They can recreate an entire landscape in hours.  They have different techniques; some alternate their front paws in a speedy scooping motion or others dig, pull and jump with both paws at the same time.  One of the true champions in fiction, probably in real life too, is found in A Dog Named Doug (Margaret K. McElderry Books, an imprint of Simon & Schuster Children's Publishing Division, June 26, 2018) written by Karma Wilson with illustrations by Matt Myers.  You might need to duck from the incoming flying dirt if you can stop laughing long enough.

Once there was a dog named Doug.
Doug liked to dig, but when Doug dug . . .

Nothing in the immediate area near Doug remains unchanged.  It's a glorious eruption of dirt and anything found in that dirt.  One fine day Doug dug up the residence of a ground squirrel who issued a challenge.  Doug accepted.  It was a race to be remembered in the annals of digging.

Did Doug stop after leaving the squirrel in the proverbial dust?  Of course not!  He kept on digging.  He left dirt piles for miles.  The ruts were as deep as gulches.  He traversed on all compass points. He unearthed a fortune in buried treasure. He kept on digging completely focused.

This dog tunneled all the way to Washington, D. C. visiting the lawn of the White House.  After taking a tour (That's what you do when you are in the capital of the United States.) he started to funnel through the Oval Office floor to get back home.  This pup had a purpose but he ended up far from his goal.  Home was not an African savanna, among the heads found on Easter Island, at the top of a snowy mountain peak or the green of a golf course.

Doug eventually dug his way home.  The family was not happy with the muddy mess BUT they loved Doug and softly bid him good night.  Now, you might think Doug was done digging.  Nope.  He had to find the right spot so he could dream of . . .


Superb use of alliteration by beloved author Karma Wilson will have readers and listeners alike moving to the beat of this story.  Rhyming words at the end of phrases enhance the cadence.  The repetition of

And boy, did Doug

is a clear invitation for participation in the narrative. Here is a passage.

He dug his way to a treasure chest
with about a million dollars inside!
Doug smiled wide, then tossed it aside.


When you open the matching dust jacket and book case white as an element allows our eyes to center on Doug digging the "u" in his name but also helps us to see the word dog.  Matt Myers's clumps of dirt soaring upward add to the realism.  To the left, on the back, is a close-up of Doug, panting with joy and covered in bits of dirt.  There is no doubt that this dog lives for digging.  On the dust jacket Doug, the dog and title, are varnished.  The dirt is too but it's also raised to the touch.

The opening and closing endpapers are a rich chocolate brown.  On the title page Doug is digging away in the flower bed in his yard.  The publisher and publishing places are cleverly interwoven among the dirt.  This is the first of numerous, delightful details courtesy of Matt Myers.

Rendered in acrylic and oil paint on illustration board each image is designed not only to elevate the narrative but heighten the humor.  Every page turn will have you smiling, laughing out loud or looking for all the extra elements.  Mounds of dirt become the letters "m".  Punctuation becomes a tunnel with Doug digging.  Words are formed from Doug's digging.

We are privy to all the underground discoveries as well as seeing what is happening above ground.  A miner looking like he's been below the surface for decades is the joyful recipient of Doug's digging.  Doug's particularly attracted to a point of interest inside the White House.  (Is that a Secret Service agent after Doug?)  The illustration sizes shift in size to supply additional pacing.  You will most definitely be unable to contain your mirth at one's specific visual's orientation.

One of my many favorite pictures is at the beginning of the book.  We are first introduced to Doug's capacity for digging.  The first two-page spread shows Doug in his neat yard near his dog house.  This next illustration is the same scene after Doug digs.  The items he finds are guaranteed to produce loads of giggles.  And readers will wonder why those things ended up buried.  They are scattered within mounds of dirt.  All we see of Doug is his backside as he goes underground, merrily digging.


No story time about dogs, pets, determination or acts of digging will be complete without A Dog Named Doug written by Karma Wilson with illustrations by Matt Myers. Everything about Doug and where his digging takes him is an opportunity for shared laughter.  Each of the places he visits will generate conversations about what he sees.  I highly recommend this for your personal and professional collections.  You might want to pair it with Walk Your Dog (G. P. Putnam's Sons, an imprint of Penguin Random House LLC, June 5, 2018) written by debut author Elizabeth Stevens Omlor with pictures by Neesha Hudson,  George the Hero Hound (Two Lions, March 20, 2018) written and illustrated by Jeffrey Ebbeler, I Got a New Friend (Alfred A. Knopf, an imprint of Random House Children's Books, May 23, 2017) written and illustrated by Karl Newsom Edwards, Percy Dog Of Destiny (Boyd Mills Press, March 28, 2017) written by Alison McGhee with illustrations by Jennifer K. Man or Antoinette (Atheneum Books for Young Readers, an imprint of Simon & Schuster Children's Publishing Division, February 14, 2017) written by Kelly DiPucchio with pictures by Christian Robinson.

To learn more about Karma Wilson and Matt Myers and their other work, please follow the links attached to their names to access their respective websites. At the publisher's website you can view interior images.  Karma and Matt are both on Twitter.  You can find them on Instagram also, here and here.  They are featured on Storytime Out Loud Podcast.
Posted by Xena's Mom at 2:16 PM