Children are full of questions and answers.  Sometimes the insight shown in their queries will leave you inwardly gasping for breath.  You will be equally astounded at the knowledge they have acquired in their few years.  Their curiosity is never-ending. 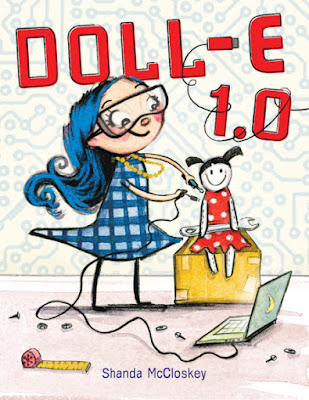 In our world hopping with technological leaps and bounds children have a golden opportunity.  When given access they can plug into a device and its applications with the ease of a professional.  DOLL-E 1.0 (Little, Brown And Company, May 1, 2018) written and illustrated by Shanda McCloskey acquaints readers with a girl who embraces technology with every fiber of her being.  She sees the world as an arena brimming with "what-if".

Whatever electronic problem her mother or father happened to have, this gal solved it with ease.  She and her pooch pal, Blutooth, tested and tried all types of gadgets and gizmos.  They were as happy as two DDR4s on a motherboard but Charlotte's parents were concerned.

When Mama placed a present in front of her one day, Charlotte was shocked at the contents.  It was a small stroller with a doll in it.  It did not want to build, pretend to be fantastical beings, or dance.  It did nothing at all.  Charlotte was beyond frustrated until she heard

Not thrilled at being a parent, Charlotte started to put two and two together.  This humanlike thing had batteries.  It must also have a memory component.  As Charlotte got excited, the green-eyed monster began to take over Blutooth.  He snatched that thing off the table and ran from the lab (Charlotte's bedroom).

Gazing at the destruction, Charlotte's mind began wondering about possibilities.  Picking up parts and adding more parts resulted in a completely new creation.  Charlotte, Blutooth and the doll were definitely altered by the unexpected but the best things remained the same.


Clever use of technological terminology by Shanda McCloskey draws readers directly into Charlotte's world.  A mix of dialogue and narrative create a lively story.  How Charlotte responds in each situation through specific word selections contributes to our understanding of her enthusiastic and scientific personality. Here are several passages.

Now things were getting interesting.

Got any other
words in your
database, Dolly?

I know!  I could run an update on
you.  You could say more words!
Would you like that?


When you open the matching dust jacket and book case, the first thing you notice is Charlotte's USB cord and screwdriver in her hands.  The collection of bolts, screws, and washers on the floor let you know she's been tinkering.  Dolly with her permanent smile holding the wrench is further evidence of Charlotte's work.  The cord winding through and over the title text is an excellent addition.  The next thing readers will notice is Charlotte's attire including her safety glasses.  This girl breaks the mold on several levels.

To the left, on the back, Blutooth, holding a dripping bottle of glue in his jaws, is looking at a sign on the wall.  It reads:

BUILDING
a friendship
is hard work!

This text is on graph paper with a blue heart drawn in crayon in the center.  Off to the left are other objects Charlotte uses; a T square, a carpenter's square, the controller for her mechanical arm and a spool of red thread.  A tiny mouse is watching from the floor.  The final important thing readers will notice is the background, computer circuitry.

This background continues on the opening and closing endpapers.  On the first one tools, bits and pieces of parts and Charlotte's spare parts box are placed across the floor.  Blutooth eagerly holds the wrench in his mouth as he leans on the box.  Charlotte is controlling the arm which angles off the upper, right-hand corner.  Without giving too much away, the final endpapers show a blissful blend of before and after.  Readers will certainly get a chuckle when viewing the title page as the mechanical arm reaches across two pages and turns up the lower, right-hand corner to reveal a portion of the next illustration.

Rendered in pencil, painted in watercolor, and then edited in Photoshop Shanda McCloskey supplies readers with one charming illustration after another.  Some of them are two page images, others are single page pictures.  Sometimes two illustrations are framed in black on a single page.  When Shanda does frame a visual, elements within that picture at times break the frame.

Readers will be captivated by all the details, especially the mechanical arm, the use of USB connections and pulleys.  It's interesting to notice what is on the work table in Charlotte's room and the design on her curtains.  Readers will need to follow the expressions on Blutooth which hints at the coming disaster.

One of my many, many favorite illustrations is when Charlotte (and Blutooth) is trying to get Dolly to dance.  A spinning disco globe glitters and hangs from the ceiling.  A speaker is sounding out notes.  Charlotte is doing a robot dance and looking at Dolly hopefully.  Blutooth is doing his own rendition of a robot dance.  Snaking up from the bottom of the page the mechanical arm is holding a tray with three juice boxes on it.


Honoring imagination, technology and a determined girl, DOLL-E 1.0 written an illustrated by Shanda McCloskey is pure fun.  The text, dialogue and wonderfully detailed images produce a story which works without a single glitch.  You can't help but cheer for this character and her dog.  I highly recommend this title for your professional and personal collections.

To learn more about Shanda McCloskey and her other work, please follow the link attached to her name to access her website.  At her website you can find extra activities related to this book.  Shanda McCloskey is highlighted at author Karlin Gray's website, at author Beth Anderson's website, at KidLit411 and at author, reviewer and blogger Julie Danielson's Seven Impossible Things Before Breakfast.  You will love looking at all the artwork.
Posted by Xena's Mom at 8:11 PM