There are those who believe not speaking the same language is a barrier.  All those individuals need to do is enter a gathering of children in a classroom, a library, cultural center or other meeting place to understand the error of this logic.  Children find a way to communicate.  They listen and watch with intention. 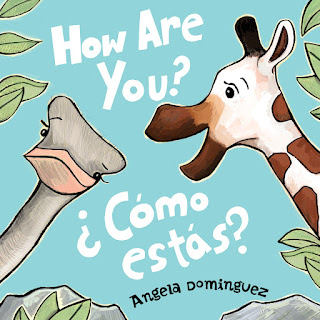 Without fail they appreciate the musicality of hearing a language other than their own spoken aloud.  They find joy in knowing the meaning of one or more words.  How Are You? Como estas? (Henry Holt And Company, March 13, 2018) written and illustrated by Angela Dominguez marks the return of two giraffes introduced to readers in How Do You Say? Como se dice? (Henry Holt And Company, November 8, 2016).  These giraffes saw the value of friendship regardless of the language they spoke.  Now a new bird is listening to their words.

The two giraffes have issued a greeting to the ostrich, which looks straight at readers with a perplexed expression.  They next ask the bird about its current emotional state.  It's unable to reply before they continue with their questions.

With one giraffe speaking Spanish and the other speaking English, they want to know how this creature feels.  Is it shy?  No.  Is it hungry?  No.  Why does this bird seem to be in no particular state of mind?

After making several other queries, they repeat their original question.  Finally the ostrich can tell them the truth without interruption.  It quickly prompts another query from the giraffes.

The ostrich can hardly stand still as it answers.  Neither can the giraffes.  Merriment fills the air.  There is only one thing left to do.  The trio does it with great celebration.


As a friend or an individual desiring to be a friend, it's essential to place the well-being of the other first.  This concern or caring shows a commitment to the relationship.  This is why the giraffes ask so many questions.  Angela Dominguez acquaints us with words used to define an individual's current mood based on feelings often portrayed by the intended audience.  When we are quiet it might be due to shyness, hunger, fright or tiredness.


The gentle humor present throughout this book is evident on the front of the matching dust jacket and book case.  The ostrich is looking at readers as if to say, "Who is this giraffe?"  "Does he want to be my friend?" "I'm not exactly sure how I am at this moment."  To the left, on the back, on a canvas of white the conclusion of the story is revealed.  It's when we know how everyone is feeling.

On the opening and closing endpapers Angela Dominguez has placed three rows of circles on the left and on the right.  In an alternating pattern, the head of the ostrich appears twice in one row and once in the next row.  The colors of purple, blue and green are used as light and darker pastels.

On the verso page at the bottom left one of the giraffes is speaking.  At the top all we see are four giraffe legs.  To the right on the title page the ostrich is stepping into view.  With each page turn the giraffes and the ostrich are placed expertly to provide pacing in combination with the phrases and single word replies.

Their expressions and where they are, especially the giraffes, convey the emotional inquiry.  For shy one of the giraffes is attempting to hide behind a rock.  For tired one of them is completely flat on the ground.  In contrast the ostrich is casually standing until the end.  Throughout the conversations you can't help but feel this is building to something wonderful.  All three of the characters are happy.

In this image, as on all of them, Angela Dominguez uses white space as an element to draw our attention to the characters.  On either side of the gutter she brings us close to first one and then the other giraffe.  Their mouths, eyes and eyebrows indicate definite irritation.  It is hilarious to see them like this.  In the background on the right the ostrich is saying

The sense of calm usually exhibited is momentarily absent.


Children (and children at heart) are going to gravitate toward How Are You? Como estas? written and illustrated by Angela Dominguez as much as they did her first book with the giraffe characters.  This bilingual tale is sheer delight to both Spanish and English speaking readers.  I recommend again using this for reader's theater.  You will want to place a copy in both your professional and personal collections.