Every time we've walked in the past twenty months it's the same thing.  Anyone within hearing distance can detect a voice continually saying, "Leave it, leave it, leave it!"  Labradors are known for their love of food but this one, my Mulan, has an appetite for everything.  It's like having a vacuum cleaner on the end of a leash. 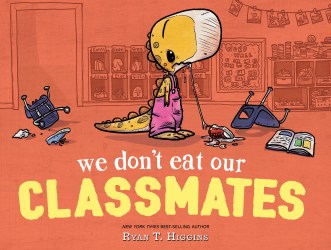 At least with young humans you don't have to worry as much about them having an appetite for everything.  Educators welcoming students, especially kindergarten students, on the first day usually need not add a "do not eat" phrase to a discussion about classroom behavior.  Of course if one of your students happens to be a carnivorous dinosaur, educators might need to rethink the rules.  We Don't Eat Our Classmates (Disney Hyperion, June 19, 2018) written and illustrated by Ryan T. Higgins is a comedic tale of a student with a craving for children . . . as an entree.

Penelope Rex was nervous.
It's not every day a
little T. rex starts school.

Penelope's mind was filled with questions but of utmost concern was the number of teeth her classmates have.  Wearing her backpack and carrying her lunch box, both covered with ponies because she loved to eat them, Penelope entered her classroom to discover there were not dinosaurs there but children.  She did what any normal T. rex would do.  She ate them.

Mrs. Noodleman, her teacher demanded she spit them back out.  She obeyed her.  Determined to have a good first day regardless of her first transgression, she gave it her best.  Standing at the bottom of a slide with an open mouth at recess was highly inappropriate.  Telling a boy he could sit on her plate at lunch was hardly the actions of a friend.  Her classmates avoided her.  It was a lonely first day.

After school her dad chatted with her about the drawbacks of consuming your classmates.  Oh, how Penelope tried the next day but her true nature prevailed.  It seemed everyone wanted to be where Penelope was not.  Perhaps Walter the goldfish would be Penelope's pal.

Longingly, as an overture of friendship, she stuck her finger into his fishbowl.  Wowee!  She wasn't expecting that to happen.  There was a definite change in Mrs. Noodleman's classroom from that day forward.  (Goldfish are so unpredictable.)


Every sentence Ryan T. Higgins writes is brimming with humor.  The statements are in contrast to normalcy and have a distinct dinosaur perspective, so we can't help but giggle and grin; lots of little gals and guys like ponies but not because they

Ever so slowly all these plot points laden with hilarity are leading us to the twist we don't envision.  These points are aided by dialogue which is out and out laughter inducing.  Here is a passage.

"Penelope Rex," her father asked,
"did you eat your classmates?"


One look at the opened dust jacket front and we know this little dinosaur simply can't help eating her classmates.  Look at the overturned chairs.  Look at the two tennis shoes, especially the one covered in drool coming from Penelope's mouth.  To the left, on the back, on a purple textured canvas is a smaller image with the pony lunchbox, a single box of apple juice and a stack of sandwiches, several breaking the frame.   Portions of both the front and back are varnished.  The title text is raised.

On the book case a single illustration features Walter.  His bowl is on the shelf at school but he is currently alone.  A series of connected straws leave his mouth and travel to that single box of apple juice on the right side of the spine.  This is intriguing to say the least and gives a hint of the shifts in this story.

On the opening and closing endpapers on a paler lime green a line is stretched from the left to the right.  Hanging with clips is a series of dinosaur drawings.  All sixteen are different.  They reflect varying degrees of artistic ability.  (Notice the dedication page.)  Beneath the title page text Penelope is saying

HEY KIDS!
You will never be
eaten by a T. rex.
They are extinct.
I promise!

Readers will be rewarded if they pause at each illustration.  Many significant elements refer to things found in real life. (On several of the images the setting is muted in a limited palette but looks like a particular place.)  There are other items; some reinforcing Penelope's existence.  Do you know why there is a motorcycle on the bookcase in her bedroom?  Does the map hanging on her wall resemble a world you know?  This attention to details in his artwork elevates Ryan's narrative and heightens the fun we have reading this book.

One of my many favorite illustrations is when Penelope walks into her classroom on the first day and eats all eleven of her classmates.  It spans two pages.  On the far left Walter sits in his fishbowl on the shelf.  At the now empty tables on the left and partially in the gutter are overturned chairs.  Penelope standing with bulging cheeks and meekly holding her arms in front of her has a tennis shoe dangling from her mouth.  Mrs. Noodleman, hand on her hip and book in the other hand, demands that Penelope spits the students back out.  The expression on Penelope's face is hysterical.


Reading this story silently or aloud will have one or more readers and listeners laughing with total abandon.  We Don't Eat Our Classmates written and illustrated by Ryan T. Higgins is a blast from the past into our present with the best kind of results.  It's one hundred percent perfection.  You will want a copy (or two) for your professional collections as well as your personal collections.

To learn more about Ryan T. Higgins and his other work, please visit his website by following the link attached to his name.  You can get some activity sheets at the publisher's website.  Ryan is highlighted at three different posts at Publishers Weekly, PW KidsCast: A Conversation with Ryan T. Higgins, Q & A with Ryan T. Higgins, and T. Rex Problems: Spotlight on Ryan T. Higgins.  Ryan visits KidLit TV and chats with author Phil Bildner on Phil's Fast Five, Podcast Bunny Presents #11, and at author illustrator Jena Benton's Simply 7 Interview.
Posted by Xena's Mom at 11:57 PM