The first things we see when we step outside each morning are a multitude of elements composing one unique scene next to or layered on another scene.  These visuals are full of shifting colors, lights and darks and blends of various hues.  If we are able to dim our other senses momentarily we can see harmony in these presentations, regardless of the season or setting. 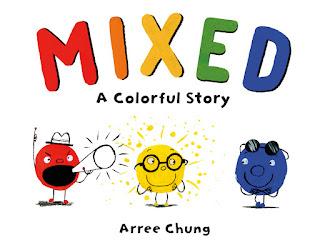 There is unity between the colors as they work together complementing each other.  MIXED: A Colorful Story (Henry Holt and Company, July 3, 2018) written and illustrated by Arree Chung celebrates this cooperation and respect.  It's a call for us to step beyond the realm of color and recognize differences, similarities and the beautiful found in each individual.

In the beginning, there were three colors.

There were Yellows, Reds and Blues, each with their prevalent characteristics.  They worked and played together in a single city.  One day, a grumpy Red declared

REDS are the BEST!

The Yellows were not happy about this, challenging this announcement with one of their own.  The Blues felt this entire discussion was beneath them and remained quiet.  Before too long, the three groups decided it was best to live in three cities instead of one.

Later a Yellow was out and about one day and spotted a Blue seated on a bench.  The attraction was instant and mutual.  Of course, other Yellows, Reds and Blues were not happy about this relationship but that did not bother this Yellow and that Blue.  They felt nothing but love and married.

Their new baby was named Green.  She had the best parts of Blue and Yellow in her but also was her own singular self.  This little miracle got the attention of other Yellows, Blues and Reds (even the grumpy one).  Her existence gave others permission to see new choices and make changes.  She was hope.


Using a mix of narrative and dialogue Arree Chung tells an important and timely tale.  His short declarative sentences give readers a clear sense of reality in the world of the three original colors focusing on their strengths.  It is one of those unique abilities found in the one Yellow which bridges the resulting divide.  In the conversational asides Arree supplies common arguments which readers realize have no value when stacked against love and acceptance.  Here is a passage.

But then, one day, a Yellow noticed a Blue

I feel so
happy
when I'm
near you!

And I feel so
calm when
I'm with you!


Placing the beginning central characters, a Red, a Yellow and a Blue on the crisp white background brings our attention to the individual facial features, body postures and added details in black highlighted here.  We know by these three individuals something big is going to happen inside this book especially when we look to the title and see the result of combining red and yellow and yellow and blue. To the left, on the back, four other titles by Arree Chung are showcased beneath a group of colorful characters.  The main title text and the three characters are varnished and raised.

Using liberal amounts of white space Arree Chung is able to create a focus on his characters.  All the details on each of them, their hats, scarves, sunglasses and glasses, and additional elements like a microphone and a car are done in black and white.  This minimalist approach is highly effective.

The black lines are bold creating realistic cityscapes. They become thicker in times of crisis or during strong moods and moments such as the closing image.  When the emotional content is lighter, the lines are finer.  The use of visuals in varying sizes provides a wonderful pacing from small pictures surrounded by white to full, two-page pictures powerful in their depictions.

One of my many favorite pictures is after the birth of Green.  She is shown in three separate images on a single page.  In the first she is doing a happy dance because she is

In the final scene she is framed by flowers (in black and white) as she stands in a garden.  She is holding a tiny shovel and wearing an over-sized straw hat.  A basket is placed next to her.  A teeny ladybug crawls along the ground.  She is joyfully waving at us.


If asked to give a single word to the result of reading MIXED: A Colorful Story written and illustrated by Arree Chung, it would be uplifting. It is indeed a book about colors but it is much more.  It's about us and the ability to see beyond color.  We are shown how individual qualities can build bridges and break down walls.  It's about honoring singularities and generating one city for all.

To learn more about Arree Chung and his other work please visit his website by following the link attached to his name.  I believe you will enjoy reading past posts on his blog.  Arree maintains Twitter, Instagram, and Pinterest accounts.  At the publisher's website you can view interior illustrations.  There is also an activity guide.  On June 12, 2018 Arree visited the Children's Book Podcast #443 to chat about this title.  Arree is featured on BookPage in an Icebreaker article.  Here is a link to Arree's YouTube channel where you can view two videos (trailers) for this book.
Posted by Xena's Mom at 12:01 PM