To Be Perfectly Honest

In sporting events athletics, whether individually or as a member of a team, are constantly aiming for the flawless play, run, catch, swing, jump, routine, kick or shot.  They practice and practice and practice until one day the magic happens.  There are others who pursue their passions aiming for perfection; the exemplary musical melody, piece of art, compilation of words, architectural design, brick wall, perennial garden, or the most successful surgery or the most delicious fruit or vegetable ever tasted.  If you love what you are doing, you will continually aim high. 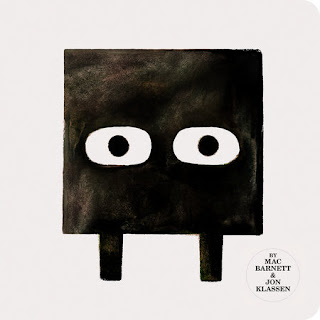 Will perfection be attained?  For some yes, for others the act of trying is a form of the ideal.  A shapely character introduced to readers in Triangle (Candlewick Press, March 14, 2017) returns in a companion title called Square (Candlewick Press, May 8, 2018) written by Mac Barnett with illustrations by Jon Klassen.  Square's friend, Circle, makes a request he is not sure he can honor.

Square has a secret cave with a square entrance in a large mounded rock.  Square's daily task is to take a square rock, a block, from down in the depths of his cave.  He pushes it with great effort up a hill.

At the top of the hill, he adds it to a stack of other blocks.  This is simply what he does.  As he is pushing a block up the hill one day, his friend Circle, glides up to him.  She believes him to be a great sculptor.  Square does not know what a sculptor is.

Circle is so excited by the shape of the block being identical to the shape of Square, she requests he make one of her.  He tries to tell her he is not as creative as she thinks he is but she has left.  This is a true dilemma for Square.

With hammer and chisel in his hands, Square begins his task but nothing works.  Soon he is in the middle of a disaster.  He is exhausted from his efforts, falls asleep and does not wake up until morning.  He realizes he is wet.

As Square stands wondering what he is going to do, Circle arrives.  She asks a question and Square replies.  She does not deter from her original assessment of Square.  She declares him a genius as she happily goes about her day.


Your enjoyment of this story does not diminish with repeatedly readings.  You find yourself smiling each and every time.  Mac Barnett gives us simple sentences but a subtle undercurrent of humor runs through the excellent blend of narrative and dialogue.  The contrast between what Circle assumes is true about Square and his conversations with her elevate the laughter factor.  He is honest enough in his thoughts to be worried about Circle's opinion.  Here is a portion of a passage.

He was surrounded by rubble.
"Whatever is the opposite of perfect,
that is what this is!  I must stay up
all night and figure this out!


A cream, matte-finished nine by nine inch cover displays Square on the front, wide-eyed, waiting and wondering.  There is something about his eyes which will have you, too, waiting and wondering.  Your anticipation is growing already.  To the left, on the back, Square's back is to readers.  His back is used as a place for four sentences giving us a hint of what we may encounter inside the book.

The opening and closing endpapers are a pale, mint green.  On the title page a tiny version of Square is placed between two clusters of rocks with delicate leaved-branches among them.  His eyes are looking to the right, inviting us to turn the page.  To the left on the verso page, all the text is placed within a square-shape.

The illustrations by Jon Klassen rendered digitally and with watercolor and graphite convey much with the placement of the elements.  (The use of the cream-colored space is outstanding in supplying pacing.)  Some are single page pictures, others cross the gutter and some extend over two pages.  We never see legs on Circle, she floats in and out of scenes.  We rarely see arms on Square and the only time we see an arm on Circle is when she and Square are giving a one-handed wave to us at the end on the dedication page.  The information about Mac and Jon which would normally appear on the closing flap is shown beneath the duo.  You will laugh when you read it.

One of my many favorite illustrations is on a single page.  Square has hammered and chiseled and chiseled and hammered a block until he is surrounded by bits and pieces of it.  What the text does not tell us is when he started this project, it also started to rain.  Now he is standing in a downpour.  A twig with two leaves is stuck to the top of his head.  His eyes are wide open but the dots are much smaller.  His hands, one holding a chisel and the other holding a hammer, are lifted in despair.  The bits and pieces of the block have formed a barrier which is holding water.


I can't imagine a professional or personal collection without a copy of Square written by Mac Barnett with illustrations by Jon Klassen.  This commentary on perfection and the joyful accident of reaching a goal is brilliant.  It shows us beauty is truly in the eye of the beholder.

To learn more about Mac Barnett and Jon Klassen and their other work, please access their sites by following the links attached to their names.  At Penguin Random House and Candlewick Press you can view interior images.  Candlewick Press has posted a short Teacher Tip Card. Please take a few moments to read the Publishers Weekly The Shape of Things to Come from Award-Winning Picture Book Team and an interview with Mac and Jon at Art Of The Picture Book.  Mac Barnett and Jon Klassen are interviewed on NPR Books about this title.  Enjoy the video.