All Toes On Deck

Every culture has its own legends and lingo.  A particular group of people within a separate culture understand every nuance of their spoken words and individualistic body language.  To step into a culture without understanding the separate parts which make it a significant whole is like entering a foreign country. 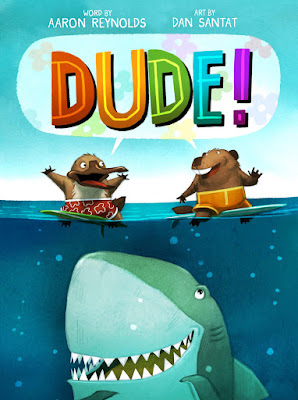 Members of the surfing community know an A-frame is not a type of home, a Barney is not a purple dinosaur or Fred Flintstone's best friend or in the soup does not mean you are an ingredient in something to eat.  Author Aaron Reynolds (Nerdy Birdy A Neal Porter Book, Roaring Brook Press, September 22, 2015) and Caldecott Medalist (The Adventures of Beekle: The Unimaginary Friend Little, Brown and Company, April 8, 2014) Dan Santat have partnered to create a rollicking, riotous masterpiece.  DUDE! (A Neal Porter Book, Roaring Brook Press, April 24, 2018) will have you laughing out loud as soon as you read the title.  Surfing and one word take on a whole new meaning.

Two friends, both having a love of surfing, have just greeted each other at the beach.  They can hardly wait to ride the waves.  Running across the sand with their boards firmly grasped in their hands, they yell the familiar word in unison at the top of their lungs.

As they paddle away from the shore to find a wave, they marvel at a pelican scooping up a fish for lunch.  One roars with laughter as the other shrieks with disgust when the pelican strikes again.  Then one of the dangers surfers fear glides toward them.  Beaver utters dude with an entirely different tone.

They are now swimming for their very lives on their boards.  A deep, quiet, tearful voice speaks as a shark towers over them.  Neither of them expects what happens next.

Two bright ideas on the part of the beaver and platypus bridge a frightening gap.  A gigantic wave carries friends having fun, fast and furiously toward . . . DISASTER!  A third brilliant thought solves a problem.  You'll be giggling and grinning louder and louder at the results of the final two scenes.

With what can only be described as sheer genius Aaron Reynolds imagines and writes an entire narrative using a single word.  He asks his readers to use their best voices to give emphasis to the word based on the situation.  A word most definitely changes in meaning based upon the emotional charge given to it.  There is an art to this form of storytelling.

As soon as readers look at the front of the dust jacket exclamations will be forthcoming.  The platypus and beaver are happy as can be.  They are doing what they love to do best.  The shark is also grinning. Given the tendency of sharks to be attracted to movement in the water, readers will not be expecting the narrative to unfold as it does.  The water and sky cross the spine to continue to the far edge of the back of the dust jacket.  This leads us to believe the two pals are far from shore.

The bold, bright colors and distinguishing shapes and lines of Dan Santat continue on the book case in red, cream and black.  The three characters, surfboards in hand are crossing the beach as a large sun sets on the red skied-horizon.  It's a stunning display.  Golden yellow covers the opening and closing endpapers.

Dan Santat alters between single page pictures and double-page illustrations depending on the impact needed for the scene and the word, dude!  In several of the settings an animated crab appears adding to the humor.  The color, size and shape of the letters are indicative of the emotional state of the characters.  Elevating the comedy even higher, the facial expressions on the characters and their body postures are absolutely wonderful,

One of my many favorite illustrations is actually a series of four pictures grouped over two pages.  In the first one the beaver, platypus and shark are frozen in place wondering what to do.  Clearly the two friends can see this is no ordinary shark.  In the next picture the beaver says Dude! as a light bulb appears over his head.  In the next two visuals the platypus and shark are alone.  In the first the platypus is whistling as the shark splashes water.  In the final picture both are starting to think the beaver is not coming back.

This over-the-top funnier than funny book, DUDE! written by Aaron Reynolds with illustrations by Dan Santat, is also a sharp and skillful study in inflection and the power of pictures without words.  It is without a doubt, read aloud gold.  I highly recommend this for your personal and professional collections.  I can hear the laughter already along with requests for read it again.

To discover more about Aaron Reynolds and Dan Santat please follow the links attached to their names to access their websites.  Aaron maintains a Tumblr site also.  Both Aaron and Dan have accounts on Twitter.  At the publisher's website you can view several interior pages.
Posted by Xena's Mom at 6:09 PM