When you spend time in the company of dogs, you realize there is hardly anything they won't do.  When they lock their mind on a goal, consider it accomplished by any means necessary.  They are perfectionists whether it's digging a hole to bury or unearth treasure, chasing annoying critters, searching for unattended food or saving human lives. 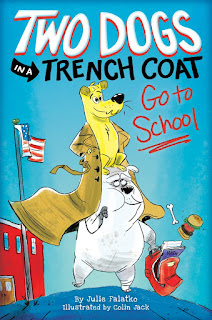 Their loyalty is unparalleled.  Author Julie Falatko, who debuted with Snappsy The Alligator (Did Not Ask to Be in This Book!) with illustrations by Tim Miller and followed with the companion title, Snappsy The Alligator And His Best Friend Forever! (Probably), has written a chapter book.  Two Dogs In A Trench Coat Go to School (Scholastic Press, an imprint of Scholastic Inc., May 29, 2018) with illustrations by Colin Jack is wildly funny.  These two dogs unconditionally love their boy.

CHAPTER ONE
Waldo was pacing the perimeter.  He was a small and scruffy dog who smelled like kibble plus something else he'd rather not discuss.

Sassy, the other pouch pal of the household and best buddy of Waldo, is currently taking a snooze.  She loves to sleep and eat.  In fact, those two things are on her mind pretty much all the time. She is quite a bit bigger than Waldo.  These canine companions are experts at keeping neighborhood squirrels as far away as possible.

Waldo and Sassy have noticed their boy, Stewart, has a problem.  His situation at school is far from being ideal.  His vibes when talking about school with his parents are not good.  To the dogs, it smells

Their first plan of keeping him home fails at the sound of kibble in their dishes.  Their second plan of following him to school ends at the locked door to the building but Waldo reveals a learned skill.  He can talk like a human!  This leads to plan number three.

By climbing on top of Sassy and donning a trench coat, Waldo looks like a human; a very fur-covered human.  Waldo and Sassy gain entry to the building by pretending to be a new student.  Using the name of Salty Woofadogington from Liver, Ohio they became a member of Stewart's class.  Mrs. Twohey, Stewart's teacher, welcomes them reluctantly. (She thinks "Salty" is a spy.)

Salty's reaction to school is exuberant. Every educational encounter is embraced with joy.  Lunch in the cafeteria is the best part of the day but gym class, music and science experiments are equally enjoyed.  The only thing topping Frisbee football is howling as a vocal warm-up and licking the thigh on the class human skeleton.  Despite brightening up Stewart's hours with their presence, Waldo and Sassy know his growing worry is because of the Big Project and the Information Sheet.

On the night before the presentation, Sassy and Waldo assist Stewart with their expert knowledge.  And if you remember what their main job is, you know Stewart's Big Project and Information Sheet are going to be humdingers.  No one will have foreseen the riotous results.  It may involve Principal Barkenoff barging into the classroom, help from Bax the bully and an uninvited visitor from outside the classroom.  These two dogs (and Stewart) will never give up that trench coat!


You cannot read this book without knowing two things for sure.  Julie Falatko knows humor and dogs and combines them expertly.  From cover to cover, the new view of school, the process of problem solving, the focus on food (and squirrels) and the love and loyalty for Stewart by the dogs supply readers with loads of laughter.  The dialogue between Stewart, Waldo and Sassy and Salty and the members of the school scene and Stewart and his parents, who are oblivious to what is happening, is witty and comedic.  Here are some passages.

Sassy had reached the good part of her nap where the sun was so hot it was like a blanket of fire, plus she was so relaxed she couldn't move.  The only thing ruining this stellar nap was Waldo.  He kept walking by her head and clearing his throat, which sounded like a bullfrog doing a dog impersonation.

They dragged all the patio furniture together to make a ramp, hoping to "run like a gazelle" (Waldo's words) and "leap like a lion" (Waldo again) until "we soar majestically like beautiful eagles to the other side of the fence" (yep, Waldo).  Instead they "ran like hedgehogs until we crashed into the chairs and got our paws caught in the seats while they fell on our heads" (that's Sassy).
Then they napped for a bit.
Finally Sassy realized she was big enough to stand up, put her paw on the latch, and open the gate.
"Well, you would have saved us a lot of time if you'd done that two hours ago," said Waldo.

"I have no idea!" said Waldo.  Maybe we'll be tall enough to climb in through a window?"
"I'm not going to be tall enough to do anything if I don't nap first."
"Fine, fine, I have some important squirrel work to do anyway.  First thing tomorrow, we do this trench coat thing."
"After breakfast, right?"
"Are you kidding me?"  This might be the most important thing we ever do!  Of course after breakfast.  No way I'm doing this on an empty stomach."
"It's a deal."


The artwork of Colin Jack appears on nearly every page and at the very least an image is seen after every page turn.  Even the sketches (I'm reading an ARC for the second time.) are full of hilarity.  The loose lines convey one animated antic after another.

For the most part we are close to the characters and their actions.  Their facial expressions will have you laughing out loud.  The placement of all the elements contributes to the superb pacing.

One of my many favorite pictures is during gym class.  Salty is watching a thrown Frisbee.  Waldo, arms in the coat arms, is leaning into the throw.  Sassy appears ready to snatch it out of the air.  She has parted the coat opening and we can see her head.  Who will catch that Frisbee?


The sign of good humor is its lasting quality.  Even on a second read Two Dogs In A Trench Coat Go to School written by Julie Falatko with illustrations by Colin Jack will have you grinning and giggling.  This perspective of school from the two dogs is hysterical.  First in a series you'll want to have a copy (or two) on your professional and personal bookshelves.

To discover more about Julie Falatko and Colin Jack and their other work please follow the links embedded in their names to access their main sites.  Colin Jack also maintains a Tumblr account.  Julie can be found on Twitter and Facebook.  Scholastic's Ambassador of School Libraries John Schumacher chats with Julie and reveals the cover of the book on his site, Watch. Connect. Read.  Julie Falatko and author Ame Dyckman chat about humor and illustration at Scholastic.