Greet Those Who Need Us

The longer you live the more you acknowledge the fragility of all life.  As humans we have the power to protect and preserve but it's a conscience choice we need to make every single day.  The more we discover and learn about all living beings on this planet, the harder we will work to maintain an environment which will support all of us. 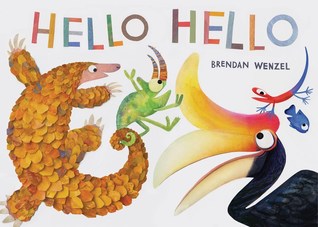 Caldecott Honor Book recipient (2017), Brendan Wenzel for They All Saw A Cat (Chronicle Books, August 30, 2016) presents a new title to readers.  In Hello Hello (Chronicle Books, March 20, 2018) he is asking us to meet an array of animals, many of their names appearing on the International Union for Conservation of Nature's list as creatures in trouble.  Several are critically endangered.

Two cats, one white on the left and one black on the right of the gutter gaze at each other in greeting.  For the phrase black and white on the next two page picture, the black cat strolls toward an American black bear.  On the opposite side of the gutter a giant panda looks at a plains zebra which looks back at it.  A small three-stripe damselfish (black and white) swims toward the right lower corner.

With ease we then welcome color.  It's rather bright, too.  With the turn of each page we are introduced to a group displaying opposites or differences.  These contrasts continue by comparing lines and dots and size.  The focus shifts bringing our attention to prominent body parts like tongues and noses.

Patterns, body positions, unusual shapes and displays of physical characteristics are astounding.  Some critters are quiet.  Other critters are not quiet.  Breathtaking beauty attracts.

Friendships are formed.  Sound abounds and animals move.  There is much to see.  It starts with you and me . . . and hello.


Even as you read the words silently you begin to feel the beat supplied by Brendan Wenzel's word choices.  Without any intentional effort, you find yourself reading the phrases aloud.  The word hello is usually followed by a single word noting the emphasis on the animals portrayed.  The second and fourth endings rhyme for most of the narrative building toward a joyful conclusion which circles back to the beginning.  Here is a sample.


When you open the dust jacket on this title, you realize Brendan Wenzel has extended the illustrations to the flaps.  A pristine white background accentuates the vibrant animals depicted.  The textures, colors and shapes are sure to have you smiling in appreciation of these animals.  The tail of the rhinoceros hornbill goes over the edge to create a frame for two butterflies. To the left, on the back, the cheetah's tail goes up to the top of the left-hand corner pointing to the three-stripe damselfish on the back flap.

On the two pages for the title display the two words are shown in shades of gray.  This leads us into black and white and then color.  Rendered in a variety of media, including cut paper, colored pencil, oil pastels, marker, and the computer Brendan connects one page to the next by having the last creature on the right be the first one to appear on the left of the next image.  It's a continuous gallery of animals found around the world.

One of the several things the beings have in common is the signature large eyes. It's like they want to see everything that can be seen.  They want to know everything about the animal next to them.  While some of the critters appear to be at rest, they also give the appearance of being ready to leap into action within seconds.  The design, the placement of the animals on the pages, is outstanding.

One of my many favorite pictures is for the second two lines so noted.  A mute swan from the previous page comes in from the left edge with its neck and face showing and nods to a platypus.  This is followed with a North American beaver up close and personal starring at the next creature.  Just across the gutter and close to us, a Brazilian porcupine has its eyes on the beaver.  In the upper right-hand corner a Western long-beaked echidna is not sure what is going to happen next.  This is one of those images beckoning to readers to reach out and touch the animals.


In an author's note Brendan Wenzel explains to us his purpose for writing and illustrating this book.  With Hello Hello he wishes to increase our awareness of some of his favorite animals.  Readers will be running to research one or more of these lively and lovely beings as soon as the book is completed.  Or they will most certainly ask you to read Hello Hello again and again.  There is so much to see in our wonderful world.  Brendan also has four pages at the conclusion dedicated to identifying the animals shown to us in this title.  This book is one you need in both your professional and personal collections.

To learn more about Brendan Wenzel and his other work, please visit his website by following the link attached to his name.  The cover was revealed by teacher librarian Travis Jonker on his site, 100 Scope Notes.  We are also given a sneak peek at a few interior illustrations.  Be sure to take a look at how teacher librarian Jennifer Reed's students responded to this book at Reederama.  The publisher has created a special page for this title and Brendan's Caldecott Honor book.  Enjoy the book trailer!