No One Asked Me!

If there was ever a library so large people could literally get lost in there for hours or maybe even days, it would be wise to head to one section and one section only.  Hopeful of finding the nonfiction books and then carefully following the numerical order on the spines, you should seek the 398.2 titles.  Within folklore, fairy tales specifically, we can usually find our way home.  Those stories entertain and educate us, as well as guide us to where happily ever after is possible. 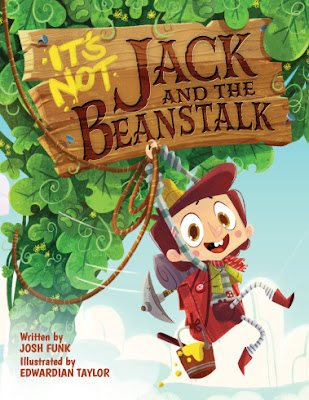 Each variant on those original narratives enlarges our thinking about alternate and creative paths leading to the same ending.  It's Not Jack And The Beanstalk (Two Lions, September 19, 2017) written by Josh Funk with illustrations by Edwardian Taylor takes an entirely new approach.  What if the characters rebel against the status quo?


Once upon a time, Jack lived in a tiny cottage in a dreary village.  He always dreamed that someday he would find his fortune.

And put on some pants!

As the well-known events continue Jack needs to sell the cow, his only possession.  Since this is no ordinary fairy tale, Jack objects.  Bessie Cowpoke McPinwheel just happens to be Jack's BFF.  He's even more upset to find out she's only worth five beans.  Five beans!?

When their so-called magical qualities fail to function, he tosses them out the window after he's told he can't even eat one.  (The poor lad is operating on an empty stomach.)  Every time the unseen narrator moves forward in the action, Jack fails to comply without a grumble and a gripe.  The next morning he is elated he did not eat a bean considering what grew overnight.  He is also flabbergasted he has to climb it.  (Who wrote this story anyway?)

With every phrase uttered by the narrator, Jack is increasingly belligerent.  He's not tired from scaling the stalk plus he spies Cinderella's castle on his way up.  An invitation is issued but the now equally frustrated voice reading the story urges him in no uncertain terms to keep going.  Upon his arrival at the giant's home, an imminent clash ensues.

It's a blend of traditional and (cue Getting To Know You sung by Julie Andrews) exceedingly friendly conversation between a captured Jack and the giant.  A rip roaring argument escalates between Jack and the giant (Fred) and the reader.  If you can manage to stop laughing the conclusions, all of them, are exactly as they should be.  The End.  Maybe.


With every sentence read silently or aloud written by Josh Funk, you feel the urge to share this book.  The snappy asides by the reader/narrator as part of the story text and Jack's comments provide an abundance of humor.  As the story and alternate story unfold you can't help but wonder why more characters have not objected before Jack and Fred, the giant.

Another technique adding to the comedic effect is the use of modern phrases,

The flow between the known narrative, the reader's statements, and Jack's and the giant's observations is seamless on the individual pages and as it resumes on the following pages.  There is not a skipped beat in the cadence.  Here is a sample passage.

Everything inside the house was tremendously large.

FEE-FI-FO-FUM,
I SMELL THE
BLOOD OF AN
ENGLISHMAN.

Umm, that
doesn't even
rhyme.  How about:
Fee-fi-fo-fum,
I can see the
giant's bum?


Upon opening the exuberant, colorful dust jacket readers are treated to two views of the skyward climb up the beanstalk.  Although our focus is drawn to the main character in each image, the two blend together nicely across the spine.  The title text carved into a sign reflects the old world quality of the tale but the two painted words make it clear this will be no normal rendition of the story.  To the left, on the back, framed in stalks and leaves, the giant's harp is singing out a fun challenge for readers.  Two birds are watching her from above as ladybugs rest on a leaf.  Bean blossoms are seen throughout the illustrations. (I am working from an F & G so I don't know if the book case is the same.)

On the opening and closing endpapers is a pattern featuring leaves, beans, Jack's backpack, his rope and ax, the magic beans, the magic bean bag, a compass, tiny blue gloves, boots, a framed picture of Bessie, tortilla chips and Jack's hat.  These items are placed on a crisp white background.  Across the verso and title pages a night scene with Jack and Bessie out and about amid fireflies is full of cheer and friendship.

Rendered digitally by Edwardian Taylor the pictures vary in size from two page spans to single page illustrations and to smaller images set in larger ones.  His shifting perspectives enhance the hilarity of this variation.  His exaggerated facial expressions with the wide-eyed looks leave no doubt as to the current emotional state of the characters.

Careful readers will note familiar individuals even without reading the invitation on the back of the dust jacket.  This draws attention to the details Edwardian Taylor includes in each picture.  You pause to look because you don't want to miss any nuance he places in his pictures.

One of my many favorite illustrations is spread across two pages. The giant's face covers nearly every bit of space, edge to edge.  His nose is meticulously aligned in the gutter.  His mouth is open in anger.  His fingertips grip the table edge.  To the left of the picture a small human Jack, standing on the table with his arm, hand and finger raised to make a point, eyes closed, is stating a couple of facts, seemingly unconcerned with the trouble he is facing.


As soon as you begin It's Not Jack And The Beanstalk written by Josh Funk with illustrations by Edwardian Taylor you can already hear the laughter of readers and listeners.  The very idea of characters objecting to the story line is funny enough but the chosen words and energetic pictures created by these two collaborators elevate the hilarity.  You will most definitely want to place this title on your 398.2 professional shelves and add it to your personal fairy tale collections at home.

To discover more about Josh Funk and Edwardian Taylor and their other work please visit their websites by following the links attached to their names.  Edwardian Taylor also has a Tumblr account.  The cover was revealed on Mile High Reading hosted by Dylan Teut, the director of Plum Creek Children's Literacy Festival.  Today at the Nerdy Book Club Josh revealed the book trailer.
Posted by Xena's Mom at 10:45 PM