Back To The Wall 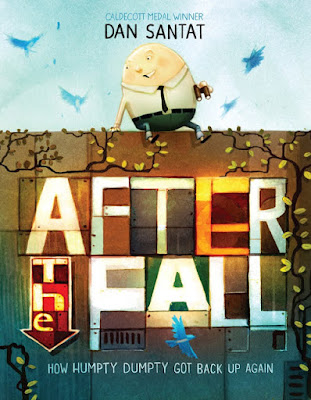 In the mind of a clever author and creative illustrator all those mysteries are resolved.  Caldecott Medalist Dan Santat (The Adventures of Beekle: The Unimaginary Friend) has written and illustrated the extraordinary After The Fall (How Humpty Dumpty Got Back Up Again) (Roaring Brook Press, October 3, 2017). You will never forget where you were and how you felt the first time you read this book.  I will always remember.

My name is Humpty Dumpty.

This was my favorite spot, high up on the wall.
I know, it's an odd place for an egg to be,
but I loved being close to the birds.

High on the top of the wall was as close to the birds as Humpty Dumpty could get.  Following their flight, binoculars held to his eyes, was his life's greatest joy.  When he fell, unlike the rhyme, the king's men, staff at the local hospital, mended Humpty's breaks.  What they could not fix was his broken bravery.  Humpty Dumpty now feared heights.

Walking by the wall each day did not alleviate his fright but reminded him of what could happen.  It wasn't the same watching the birds from the ground but unexpectedly an answer to his problems passed through his range of sight.  Humpty Dumpty was consumed with making the perfect paper airplane.  He crafted one after another over and over and over again

until I got it just right.

The old elation, missing for so long, filled his soul as he watched this bird, formed with his own fingers, soar.  Then what he dreaded most happened.  His perfect paper airplane, his avian adventurer, drifted down to the top of the wall.

Humpty Dumpty had a choice to make.  This choice would determine the direction he would follow for the rest of his life.  To face one's fright is to achieve the unimaginable.

As soon as Humpty Dumpty introduces himself to readers, we recognize his candor.  We comprehend through the first person voice author Dan Santat has given him the importance of this spectacular version, this new vision, of a nursery rhyme.  Page by page as his story is told our compassion grows.  Who among us has not had to face a fear, begin anew or conquer worry?

As our connection to this character strengthens, we share in his renewed hope through the idea of fashioning a paper airplane.  As he talks about how hard this is, we can't help but think of the brilliance of this plan.  Something is building inside us as we read.  The word choices and sentences are taking us with intention toward a conclusion unlike anything we have ever experienced.  Here are two sample sentences.

Fortunately, all the king's men managed to put me back together.

There were some parts that couldn't be healed with bandages and glue.

With the blue birds (happiness) surrounding a smiling Humpty Dumpty seated on the wall on the dust jacket, it's easy to see how much he enjoys this activity. The title text appears to be a part of the construction of the wall.  The wall crosses the spine and continues to the left edge on the back.  The ladder Humpty Dumpty uses to climb to the top is shown on the left.  Text above the wall reads:

LIFE BEGINS WHEN YOU GET BACK UP.

The book case (shown on Dan Santat's Instagram account) (I currently have an F & G and can't wait for the release date.) is light in color.  It shows Humpty Dumpty tumbling through the air, binoculars falling too.  The birds flutter above, below and to his left.

On the opening and closing endpapers we are shown a panoramic view of the realm with the wall behind the community.  In the first a small Humpty sits on the wall on the right with the birds around him.  A day is beginning.  In the second the sky has changed.  Lights are on in some of the windows.  The sky is purple as dusk darkens it and a few stars shine.  The blue birds are soaring higher.  And Humpty . . .

The title page mirrors the jacket but Humpty Dumpty has started his fall backward off the wall.  On the verso the dedication is carved into the wall.  It's For Leah with a heart and arrow beneath it.  Leah is Dan Santat's wife.

Most of the images extend over two pages in dazzling portrayals enhancing the character's story.  Dan takes us into a grocery store as a discouraged Humpty shops rows of shelves spread before and above him, down a nearly empty street along the wall as fall leaves glide down, into the snowy cold of winter as Humpty looks up at birds and with Humpty as he lifts his perfect paper airplane bird victoriously in the air.  Each of these images demonstrates the masterful use of perspective.  We are alongside our character, we are looking down at him or we become him.  In some of the double page pictures the use of white space will take your breath away.

After you have read this book you need to notice all the exquisite details included.  The framed Daily News article about Humpty Dumpty's bird watching award, the pictures on his coffee cups, the reflection in Humpty Dumpty's eyes when the accident happens, and a familiar family name above a building all point to this not only being a personal story for our nursery rhyme friend but also for the creator.  There is passion in every line, in every color.  This is indeed a labor of love.

One of my many, many favorite illustrations is when Humpty Dumpty is in the grocery store.  Even though this is when he reveals to readers his fear of heights, it is also an opportunity for Dan Santat to insert his humor.  The first two rows are full of color and sugar and crunch.  You will love all the names like Sugar Bunny, Just Marshmallow and Bowl-O-Cookies.  With each lower row the color leaves until the bottom row is shades of gray.  Some of those names are Cardboard, Twigs & Berries and Fiber Flakes.  A dejected Humpty looks mournfully at the choices.

One word which rings out of your mind after reading After The Fall (How Humpty Dumpty Got Back Up Again) written and illustrated by Dan Santat is triumph.  This book is that (and more) for the character, for Dan Santat and us lucky readers.  I would plan on multiple copies for your professional shelves and it's a must have for your personal collection.

To learn more about Dan Santat and his other work please follow the link attached to his name to access his website.  At the site dedicated to this book you can view the book trailer.  To get a peek at interior images please visit the publisher's website.  Dan Santat is a guest at PictureBooking, Episode 83.  Dan Santat answers five questions at The Horn Book. Dan speaks about this book, why he wrote it and what he hopes its value is for readers at the Publishers Weekly PW KidsCast.

Educator extraordinaire, author and editor Colby Sharp continues his Vlog series with Dan Santat, asking him about the dedication in this book.

UPDATE:  Dan Santat stops by All The Wonders, Episode 392 to talk with teacher librarian Matthew Winner on October 6, 2017.