The month of April is coming to a close but the observance of National Poetry Month need not stop.  Let's just think of this month as an introduction to a literary form allowing everyone to express themselves in a variety of writing styles every single day of the year.  If you have a flair for visualizing shapes, pen a concrete poem.  If you wish to focus on the natural world, the five-seven-five syllable haiku is the perfect kind of poem for you.  If you enjoy even more structure, the five line cinquain asking for a single noun, two adjectives, three -ing participles, a four word phrase and closing with a synonym for the first noun is what you should write.  If you like the rhythms of rhyming create a couplet. 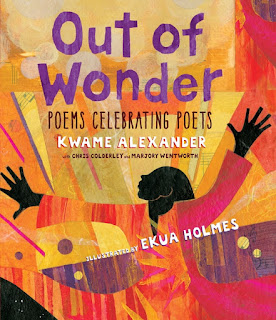 Poetry beckons to the universal qualities found in all people.  Out of Wonder: Poems Celebrating Poets (Candlewick Press, March 14, 2017) written by Kwame Alexander with Chris Colderley and Marjory Wentworth with illustrations by Ekua Holmes expresses the admiration held by these three poets and artist for twenty other poets.  They have collaborated to inspire others as they were inspired.

In the first of three parts, Got Style?, poets are featured for creating a signature style.  With recognition and respect the poems written about them underscore their individuality.  Kwame Alexander's How To Write A Poem celebrating Naomi Shihab Nye will have you reaching for the nearest means to record your thoughts.  The same peace we find in Robert Frost's contemplations is echoed in Marjory Wentworth's In Every Season.  Gathered thoughts, separated by pauses, lyrically define poetry in a manner reminiscent of the work of Nikki Giovanni using all lower case letters.  Snapshots by Chris Colderley is a loving tribute.

In Your Shoes, the second section, focuses on poetry written by one author (us?) which reads like it was written by a favorite poet.  Beginning with basketball and continuing the analogy dreams are shared, glory days of youth are remembered and heroes of Harlem are saluted in Walter, Age Ten celebrating Walter Dean Myers by Kwame Alexander.  We travel to the private place in Chile beloved by poet Pablo Neruda in The Music Of The Earth written by Marjory Wentworth.  Calm is found in nature by a man devoted to poetry, politics and his people.  Majestic musings about those who walked before us on Tambourine Mountain pays tribute to Judith Wright.  Chris Colderley asks us in Tambourine Things to hold a found fossil in our hands, listening and watch the shadows fall as the sun sets.

In the final part, Thank You, the three contemporary poets write poems regarding those poets who affected them in a deeply personal manner.

A poem can sometimes be so powerful that it might even feel as though the poet is speaking directly to us, as if we are in the middle of a private conversation.

They showcase Gwendolyn Brooks, Sandra Cisneros, William Carlos Williams, Okot p'Bitek, Chief Dan George, Rumi and Maya Angelou.  These poems do indeed beckon but they wrap themselves around you in the glory of the words.  You cannot help but feel the love as each poet's life story is revealed.


This collection of poems written by Kwame Alexander, Marjory Wentworth and Chris Colderley not only pays homage to twenty poets but introduces readers to the particular voice of these three poets.  After reading several of their poems you sense the similarity in how they approach the poet they are showcasing.  No matter which poem you are reading, whether written by Alexander, Wentworth or Colderley, you will find yourself without conscious thought sighing or gasping as you read the last line.  They are all brilliant.  I will share a portion of a poem written by each one.

I'd like to soar one day
like Sweetwater Clifton high above the rim---
I wanna trot the globe
grab the world in my hands and
twirl a big ball of hope
from corner to corner.  ...
Kwame Alexander

In Every Season
celebrating Robert Frost
... I have stopped to shake the dry snow
from the branches and watched the outline

life is too much like a pathless wood.
Still I have lived so long and traveled so far,

and I have climbed these hills and looked
at the world and descended.
Marjory Wentworth

people forget...poetry is not just words on a page...it is...
a snowflake on your tongue...a tattoo on the inside of your arm...a dashiki and a kaftan...
tripping down the streets of Lincoln Heights...shouting from the hills of Knoxville, Tennessee...
Chris Colderley


The warmth of the color palette and design radiates from the front of the matching dust jacket and book case.  The figure, arms raised and fingers spread, is moving to an unseen music, the poems we have yet to read.  On the back, to the left, on a golden background with hints again of musical notes, a list of the twenty poets is shown.  The deep purple of the title words is spread across the opening and closing endpapers.  The poets being celebrated are royalty in the world of literature.  Portions of geometric golden suns are displayed on the title page.  This design is used throughout the book as accents and for each of the three parts.

The artistic technique for creating these illustrations, collage on paper, used by Ekua Holmes presents readers with unique portrayals spreading across two pages, framed on a single page, as insets on a single page or edge to edge on a single page.  Vibrant colors are woven into each one.  Various papers give a texture to each visual, inviting readers to touch the pages.  Holmes varies her perspective in keeping with the poems.

With each page turn it's as if you are walking through an art gallery.  Elements in the illustrations reference the poet and the place in which the poem is set.  As soon as you finish, you will flip the pages to see all the pictures again.  They are striking...every single one.

One of my many favorite illustrations is the two-page spread for Snapshots.  Page edge to page edge a cool shade of green (teal?) provides a canvas for large snowflake designs.  Small white dots are blended with them.  Some of the snowflakes are in the foreground, some in the background.  On the left a boy wrapped in winter clothing is leaning back tasting the flakes with his tongue.  Opposite him on the right a girl is doing the same thing.  All we see is her face peeking out of a hooded coat.  Red, a darker shade of green and a golden yellow are chosen for their clothing.


Every bookshelf needs to hold a space for one or more copies of Out of Wonder: Poems Celebrating Poets written by Kwame Alexander with Chris Colderley and Marjory Wentworth with illustrations by Ekua Holmes.  In a word this title is stunning.  Prior to Kwame Alexander's Preface is a Contents.  At the conclusion of the book six pages are dedicated to giving readers more information about the twenty selected poets.  They are also listed by Ancient And Foreign-Language Poets, Nineteenth-Century Poets, Twentieth-Century Poets and Contemporary Poets.  Short biographical paragraphs are included for Kwame Alexander, Chris Colderley and Marjory Wentworth.

To acquaint you further with Kwame Alexander, Marjory Wentworth and Ekua Holmes please follow the links attached to their names to access their websites. NPR Morning Edition features this title in an interview with Kwame Alexander.  Marjory Wentworth is highlighted at knowitall.org   The Horn Book podcast 2.8 has Ekua Holmes as a guest.  Ekua Holmes visits The Brown Bookshelf for an interview.  At Penguin Random House you can view the first ten pages.  Candlewick Press has created a teacher's guide. Teacher librarian Jennifer Reed wrote a blog post at Reederama about using this title in her school library.
Collage Artist | Ekua Holmes Video from AugustineMonica Films on Vimeo.