Below Where We Go 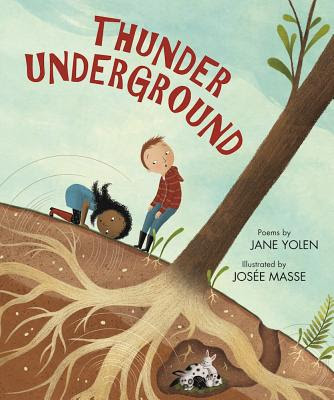 There is much to investigate above the planet's surface but take away mere inches or dig down miles; secrets are revealed, seeds and roots send signals, animals of all sizes build and burrow, manmade transportation travels, and portions of the earth flow, shift and shake.  Thunder Underground (Wordsong, an imprint of Highlights, March 28, 2017) poems by Jane Yolen with illustrations by Josee Masse welcomes readers to wonder about that which is not readily seen, heard, tasted, touched or smelled.  Whether read silently or aloud these twenty-one poems take us on a joyous journey of discovery.

UNDER
---ground
Beneath our feet,
a world apart,
is found our Earth's
fast-beating heart.  ...

In this first poem we pay tribute to the life-giving forces underground.  We are also asked to gather wise words creating a foundation for us to expand our understanding.  Basements are a good place to start; sending electricity and heat to our homes and storing food and memories.

Did you know scientists have heard corn converse?  Perhaps they are talking about the noise made by beetles wishing they were as quiet as ants.  Maybe they are marveling about the earthworm casseroles made by the moles.

Stepping into cities and down the stairs to subways, we speed from place to place.  Other dark corridors here hold mechanical parts which keep the body of the city breathing.  From here we venture back to the countryside to contemplate Three Things I Know About The Roots Of Trees.

If we move dirt, we'll make holes into history; lost cities, lost treasures, lost species.  Time covered them for us to find.  Our Earth never sleeps; hot to the core, waiting for the next event.  What will it make for us to explore?


For decades her work has been a huge part of my reading life; picture, middle grade and adult books.  Her words, carefully chosen, never stay on the page but come out to surround you, pushing aside the here and now and forming a new world.  Jane Yolen uses language like a potter does clay.  She is a master.  In this title each poem stands alone but is also a part of the collective whole.

She creates beats with rhymes on every other line, she makes word lists like links in the strongest poetic chain, she fashions metaphors, and she composes onomatopoeia and alliteration.  She presents the world to us through a different lens.  Here are two portions of two poems.

OH, TO BE AN ANT
...
Their mega-city
cambered, chambered,
tied by endless highways,
byways made by workers,
hauling dirt four times
their weight.
Not architected by one will,
but thousands working,
never
still.

SUBWAY
I like the sound the subway makes
deep in its underground den.
I like the growling as it goes
from street to street,
and then
I like the squeals its iron wheels
make coming 'round again. ...


Charming is a word which comes to mind when first looking at the opened matching dust jacket and book case.  The underground scene stretches over the spine to the far left with a fox hidden in foliage watching the children.  I already know what younger readers will do when they see the rabbits snug and cozy in their warren.  The color in the boy's pants and the girl's dress is the hue used on the opening and closing endpapers.

Rendered in mixed media Josee Masse continues her under and above ground portrayals on the title page featuring a mother fox above two pups nestled but lively below her.  With a page turn the level of the ground continues to the verso and contents pages.  Ants still crawl along the top edge and bones and stones litter the layers of dirt.  A shovel rests against the base of a hole which holds the text for the contents.  On the far right at the top, the mother fox pushes dirt into the hole with a back paw.

Josee Masse enhances the words of Jane Yolen with her attention to detail and visual storytelling skills.  Readers will enjoy watching the girl and boy as they first gather items in the basement to use in their explorations.  With every poem, stop they make, they learn and gather more.  Sometimes we are given a larger view of where they go or we move in closely with them absent from the scene as in the case of the beetles, ant and earthworm poems.  We only know they are there from the flashlight shining above one of the ant hills.  It's fun to look for them and their companions in each picture.  All of the images span two pages.

One of my favorite of several illustrations highlights two mole poems.  Half of the image shows tunnels underground housing stashes of worms with three moles moving about and babies curled in a little hole.  Off to the right a mother rabbit sleeps with two little ones.  Above ground on the left the boy is reaching down to touch one of the mole's noses with his finger.  On the far right we see the girl's red boots, legs and part of her skirt.  A little rabbit is looking up at her.  Plants and grass are growing along with top with roots reaching into the ground.  A page turn reveals how Masse continues this scenario.


Readers will be actively engaged in the poems and illustrations found in Thunder Underground written by Jane Yolen with illustrations by Josee Masse.  Creativity abounds as we venture under the ground.  At the conclusion of the book, Jane Yolen includes Notes On The Poems: Both Scientific And Personal.  You will want to add this title to your personal and professional bookshelves.  It's guaranteed to promote further research and poetic writing.

To learn more about both Jane Yolen and Josee Masse please visit their websites by following the links attached to their names.  You can find more information about Josee Masse here.  Jane Yolen is interviewed at Reading Rockets.
Posted by Xena's Mom at 1:33 AM