You Look, You See, What Can It Be?

a collapsible shade for protection against weather consisting of
fabric stretched over hinged ribs radiating from a central pole;
especially: a small one for carrying
Merriam-Webster

For most people an umbrella is exactly as defined and written by the authoritative folks at Merriam-Webster.  For others in addition to the more practical uses, it is a fashion statement, a piece of wearable art, a proclamation of one's lifelong pursuits or a declaration of one's viewpoint on a specific issue.  An umbrella may be a solid color on the outside but colorful on the inside for the bearer.  Some have a Monopoly board along the edges; others are shaped like large leaves found in a rainforest. 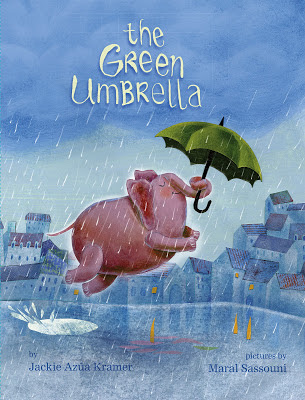 For those with the gift of imagining, umbrellas can be a little bit more.  The Green Umbrella (NorthSouth Books, Inc., February 1, 2017), by author Jackie Azua Kramer and illustrator Maral Sassouni, takes us into the realm of marvelous maybe.  This debut picture book for these collaborators encourages readers to challenge what they know.  Like all good stories it asks them what if?

One rainy day an Elephant was taking a walk with his green umbrella.

Clearly enjoying his walk, the Elephant was surprised to be stopped by a Hedgehog.  This Hedgehog accused him of having his boat.  A BOAT?  Without a doubt, Hedgehog perceives the umbrella as a boat describing in great detail his adventures in THAT boat.

The Elephant did not know what to make of this but nevertheless invited the Hedgehog to join him under the umbrella.  In no time at all a Cat stops the twosome making another equally strange claim.  He too relates how the umbrella served him in another capacity as he roamed the woods and stopped for a cup of tea.

Now there are three creatures under the Elephant's green umbrella.  As they walk along they are approached by the Bear whose claims are unbelievable.  The leap from umbrella to flying machine is extraordinary.  To further justify his ownership the Elephant relates all the things the umbrella has been and done for him.  It simply could not belong to anyone else but his justifications do seem to prove a point.

The Elephant begins to walk away when it stops raining.  As the Hedgehog, the Cat and the Bear start to protest up walks an old Rabbit.  An extended but familiar scenario is presented.  As is his custom Elephant offers an answer but this time another voice becomes part of the chorus.  This makes all the difference.


In a rhythm as old as time, Jackie Azua Kramer spins a tale drawing all readers into the woven tapestry with her words.  Not once but three times the Elephant is challenged in his belief but his response is one of kindness.  After the third time the cadence shifts, then is repeated with a fourth encounter.  As the final threads finish the entire scene the Elephant's generosity becomes part of a new adventure for strangers who are now forever friends.

The mix of dialogue and some narrative offers readers a chance to participate in the story.  Repetition of key phrases supplies an ebb and flow.  The explanations of all the animals are vivid and lyrical.  Even though an article precedes each of their names, by capitalizing the first letter they become very significant characters.  Here is a sample passage.

"I crossed the deep oceans on my boat and faced the crash of icy waves.  I saw dolphins leap two by two and tasted the salty spray of whales.  The stars were my guide and my boat a faithful friend," said the Hedgehog.


Rendered in a mix of painting and cut paper collage all of the illustrations by Maral Sassouni beginning with the dust jacket (I am working with an F & G.) are whimsical and utterly charming.  Her landscapes even in the rain are welcoming.  When you first see the front of the dust jacket, the colorful elephant carrying the green umbrella literally sings out to readers.  (Is anyone thinking of Singin' In The Rain?)  As our eyes drift left to the back, a group of friendly mice wearing raincoats and boots and carrying umbrellas are sure to elicit smiles.

The opening and closing endpapers are an extension of the dust jacket.  The Elephant is now walking over a rolling hill.  He is accompanied by a village of mice wearing raincoats, jackets, scarves, boots and carrying umbrellas.  They are joined by a small bird in similar attire.  One smaller mouse is leaping with joy.  The Elephant is placed under the text on the title page carrying an unopened umbrella.  To the left on the verso is a container filled with unopened umbrellas.

Each page turn reveals either a two page picture, single page visual or a circular image placed on a single page in white.  These shifts in size compliment the narrative superbly.  When the Elephant and the old Rabbit expand on the theme, Maral alters her style giving the one a sepia-toned color palette with spot color and the other a more vibrant depiction looking like places on a map of life.  The inclusion of extra details, the arc of lines, the smiling faces of the characters and open positions of body placements convey an exuberant outlook by the characters.  The pictures when each animal is speaking of their name for the umbrella are so inviting you want to step right into the page.

One of my favorite illustrations is of the Cat explaining the importance and use of the green umbrella.  A tranquil forest is the stopping place of the Cat.  She is seated on the right on a log with a Raccoon.  They are enjoying sweet treats and cups of tea.  To the left the umbrella stands opened over a cozy bed and a rock holding a lantern.  An open book is placed nearby.  Red birds, small red-capped mushrooms and leafy plants frame the duo.  Strung between trees are two rows of pennants.


Sharing The Green Umbrella written by Jackie Azua Kramer with pictures by Maral Sassouni with readers and listeners is sure to generate a cheery connection.  This story will inspire others to think of possible uses for umbrellas pointing out the value in everyone's viewpoint.  The next time it rains be sure to take an umbrella.  You never know who you will meet and what stories they will have to tell you.

To discover more about Jackie Azua Kramer and Maral Sassouni and their work, please visit their websites by following the links attached to their names.  Yesterday they graciously answered a series of questions about this title and a little bit about themselves in a blog post found here.  Maral includes many pictures of her process.  At a publisher's website you can view several interior images.  John Schumacher, Scholastic's Ambassador of School Libraries, reveals the book trailer on his blog, Watch. Connect. Read.  Be sure to read the posts by other bloggers participating in this blog tour.

UPDATE:  There is a wonderful article at Pen & Oink about the art process for this book, March 29, 2017.