A Chat With The Creators Of The Green Umbrella

Wind in Michigan, no matter the area, is a given.  The influence of the lakes and the land formations contribute to its presence sometimes day after day for weeks.  A calm day is a rarity.

It's easy to recall no one on campus at Central Michigan University made it through one semester let alone four years without more than one umbrella.  On windy afternoons a common site was a cluster of umbrellas, inside out, abandoned in garbage receptacles.  Many rainy days would find students scurrying to class, huddled under their umbrellas, only to have them ripped from their hands, tumbling across campus usually looking nothing like their original shapes.  It was hilarious to watch until it happened to you. 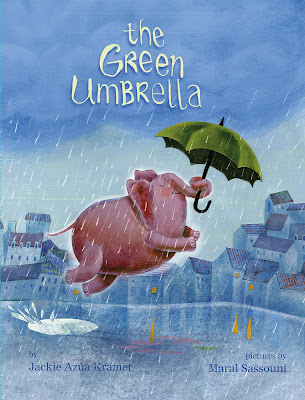 Seeing the cover of The Green Umbrella (NorthSouth Books, Inc., February 1, 2017), a debut picture book by both author Jackie Azua Kramer and illustrator Maral Sassouni, is like walking across campus all those years ago eager to see what the day, instructors and students will reveal.  It's full of possibilities.  It also makes you curious about the two individuals responsible for this children's literature gem.


I was thrilled to be able to send them both questions.  Their answers are delightful, as if the three of us are seated in cozy chairs around a crackling fire.  I know you will feel as if they are good friends once you read their replies.  I do.


Let's start first with author Jackie Azua Kramer.  My questions are in bold.  Her answers are in italics.

1: Was there a particular incident, an object, a thread of conversation or something you read which placed the seed for this book in your mind?

The catalyst for The Green Umbrella (TGU) were these illustrations I discovered which all revolved around a green umbrella. That began the wild ‘what if’, the chemical reaction, otherwise known as, inspiration. What if a cast of characters each saw the umbrella as something else, like when you look up at a cloud?

But perhaps the seed for the story was planted long ago when I was a child. As a child into my teens, I travelled all over the world with my family. My father used to remind us as we met new people, saw new things, ate new food and heard new languages--that we were American ambassadors. We, as ambassadors, should reflect the best in people. Maybe, the Elephant in the story is that ambassador, with the Hedgehog, the Cat, the Bear and the old Rabbit, reflecting the different people and cultures, that see the umbrella in unique ways.

2: Your choice of characters, the Elephant, the Hedgehog, the Cat, the Bear and the old Rabbit are an interesting combination.  In the real world it would be unlikely to see them together but it works in this book adding to the whimsy.  Did you have a particular reason for choosing these specific animals?  Why was the Elephant chosen as the main character?

I get to play in the most fun, raucous and fantastical playground…a child’s imagination. The idea of characters who are unlikely to be seen together remind me of why I love my work as a storyteller. I’m not the first one to do this. Not to compare myself, but perhaps I was channeling AA Milne, in the classic, The House at Pooh Corner.  Alongside Pooh, there’s Piglet, Eeyore, Tigger and Roo. Both, the Elephant in my story, and Pooh, remain at the center of the story and the action. There’s a scene in The Green Umbrella, when they’re all sitting together having tea, and part of the text reads: “…shared their stories.” I love the idea of all of us sharing our journeys with each other. The world is becoming flatter, and the unlikeliness of this bunch becoming friends, to my thinking, makes it a universal story.

3: Throughout the book the green umbrella becomes many things depending on the character’s voice we are hearing.  Other than a shelter from weather, what object would the Green Umbrella be for you?

Not actually an object, but a TREE, without a doubt! I was born on April 22nd, Earth Day and right before Arbor Day. I have a strong and deep connection to trees. A day doesn’t go by that I don’t stop and notice a tree. I write, dream, think and pray, under and around trees. Under the branches of a tree, like the green umbrella, they both provide a place where all are welcome. I have many wonderful memories of family dinners and laughing with friends under a tree.

4: Do you have a writing nook or a spot where you prefer to write over other locations, Jackie?  Would you describe it for us, please?

Oh, Margie, I can’t pick just one! Different settings create certain moods for me. My most favorite place is my mind. A story lives and percolates in my writerly mind for a long time. It starts with an idea and then I move quickly to images. Moving images allow me to play, imagine, and edit easily in my imagination. Inspired by Hurricane Sandy, “The Boy and the Eight Hundred Pound Gorilla” (Candlewick Press, TBD), lived in my imagination for two years.

When I’m ready to begin a draft, I’ve lovingly nicknamed my back yard, ‘The Canopy’.  It’s a secluded spot surrounded by large leafy trees and bushes that I have the privilege to write under during the spring and summer. Throughout the day the quality of light shifts through the leaves and branches. And the trees are filled with all kinds of visitors-- birds, squirrels and insects that become my soundtrack. And often in winter, you can find me at my beloved local library. In a quiet corner, with giant windows that face an ivy-covered church, it becomes a perfect writing nook.

5.  What is my favorite place to read?

My bed surrounded by a pile of books.

Let's hear what illustrator Maral Sassouni has to share with us.  My queries are in bold.  Her replies are in italics.


1.   Your artwork for The Green Umbrella has a distinct essence to it. Would you please describe to us how these images were rendered? 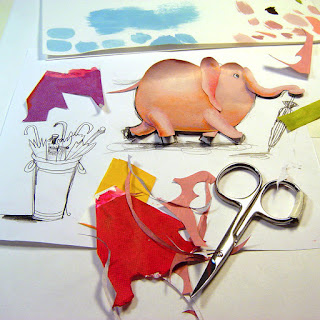 My artwork is a combination of painting and cut paper collage. Sometimes the painting dominates, and other times the collage dominates: it depends on the project. In any case, I paint with both acrylics and oil paints. Occasionally, I also incorporate other materials/ techniques —fabric scraps, India ink, monoprints, oil crayons — just to get closer to the image in my mind’s eye. 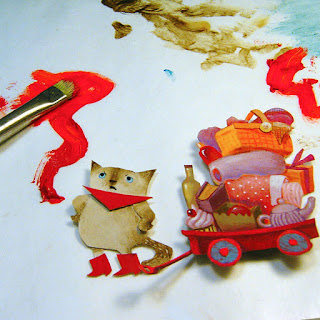 For The Green Umbrella, the collage elements were dominant. I created the backgrounds and the characters separately. Essentially, it was like paper figures in a little paper theater on each page. Even though the composition is always sketched out in advance, I like the freedom of making adjustments to the characters and setting until I get them just right and finally glue them together.

After that, I just scan the images into Photoshop and tidy up stray pencil marks, glue crumbs, cat hairs— and occasionally add a touch of sparkle and glow digitally. 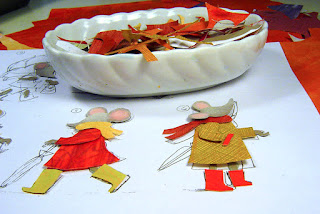 2.  In my way of thinking the settings for each scene add to the underlying imaginative quality of the pictures. I am curious as to why you had the animals chatting in a city and eventually meeting together outside of their community. Was this something you thought of the first time you read the manuscript or did this evolve?


The idea of setting the story in a city came to me immediately. Rainy days in cities are visually interesting to me, with their shiny sidewalks, wavy reflections and puddles providing bright mirrors here and there. 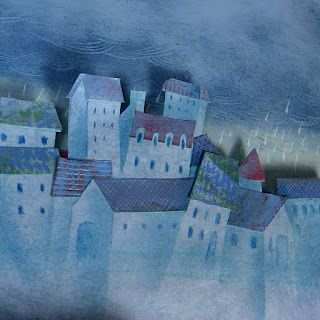 Then of course, cities are where you might cross paths with all kinds of unexpected characters — and this is what happens in the first half of the story. Later, the animals set aside their differences and become friends, and I wanted this to take place out of doors. The wide open spaces go along with the sense of new possibilities that the characters now have, as well as giving them somewhere to go as they light out for the territories. 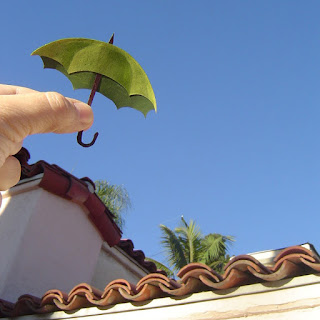 3.  Is your choice of color palette expressly for this title or are these colors your signature hues?

In The Green Umbrella, I wanted to create a contrast between everyday reality on the one hand, and the world of imagination and adventure on the other. So the rainy town is in cool colors— it’s dim, damp, dreary and practically monochromatic… as opposed to the scenes described by each animal, which are in warm and vivid colors.

My other guiding principal in terms of color was to follow the day as it progressed from morning to night. From a somewhat soggy morning stroll to warm late afternoon light, then the glowing sunset colors and beyond — to the first twinkling stars and dreams of new explorations.

4.  Would you please describe for us your working space?

It’s a spare room at the top of the house. I’ve got three tables (just barely enough!), two bookshelves and one flat file (bulging with sketches, illustrations, prints and blank paper). When I’m working on a project, the walls are covered with sketches from the project as I try to figure out the characters, setting, page composition, color schemes and all of the other things that might help along a narrative. There are all kinds of inspiring scraps and swatches as well, there to trigger memories or new stories. It’s like the inside of my head!

5.  Where is your favorite place to read?

My very favorite place to read would be on a train at night. There are no distractions, you can’t see or even guess at the landscape, and the rhythmic sounds and gentle motion concentrates the mind wonderfully.  Total immersion…bliss!

(Sadly, night trains are not as much a part of my everyday life as they once were, so my favorite place to read that’s within reach in real life is the library on a rainy day.)


I am grateful to both Jackie Azua Kramer and Maral Sassouni for taking the time to help us become better acquainted with The Green Umbrella, their process and a little bit about themselves.  Be sure to visit this site tomorrow for more about The Green Umbrella.  You won't want to miss the double giveaway we have to offer! 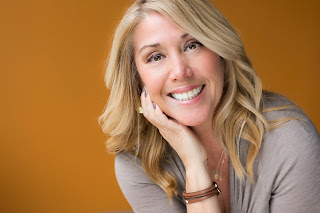 Jackie earned her Masters of Education from Queens College. She is a member of SCBWI and has written for the SCBWI Bulletin. In 2014, she was invited to be a member of the Bank Street Writers Lab, Bank Street College. In 2015 Jackie was a presenter at the 1st nErDCamp Long Island.  Her picture book, The Green Umbrella (North South Books) debuts February 2017 in English/German. Out soon --The Boy and the Eight Hundred Pound Gorilla (Candlewick Press, TBD) and If You Want to Fall Asleep (Clavis Books) in English/Dutch.  You can learn more about Jackie at her  website on  Twitter Facebook or Instagram 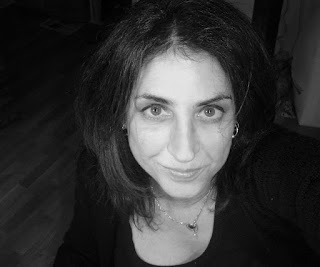 Maral Sassouni was born in Philadelphia and grew up in California.  She's been an illustrator for over 20 years and has won many awards, including the SCBWI Portfolio Grand Prize.  Her work has been recognized by the Society of Illustrators, NY, and exhibited in group shows of children's illustrations around the world.  Based in Paris since 1992, Maral now divides her time between France and California.  The Green Umbrella is Maral's first picture book.  You can discover more about Maral at her website.  You can find her on Twitter, Flickr and Tumblr

I know you will want to know more about both of these talented ladies.  Stop by the other blogs on the tour.  There are giveaways at several.  Simply follow this link.