When readers connect with characters, for whatever reason, it's a bond which lasts a lifetime.  They will want to read the stories in which these characters find themselves over and over.  Each time they are read it's as if it's the first time but the experience is far richer for those characters have become friends.  This is the huge attraction of sequels, trilogies and books in a series. 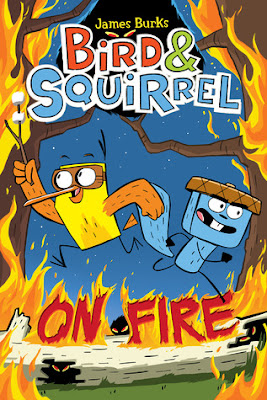 If the characters are part of a dynamic duo and happen to be as different as night and day, they become even more attractive to us.  It's the contrast in their personalities which makes for a realistic tension and continual comedy.  In the fourth volume of his highly popular and beloved series Bird & Squirrel On The Run!, Bird & Squirrel On Ice, and Bird & Squirrel On The Edge! author illustrator James Burks delivers more adventure and laughter than ever in Bird & Squirrel On Fire (Graphix, an imprint of Scholastic, January 31, 2017).

Today is the happiest day of my life.
I'm almost home.

Squirrel is thrilled to be nearly back at his tree, his sanctuary from all the craziness he perceives in the outside world.  And to be fair, he and Bird have had their fair share of narrow escapes, all from those wishing to consume them for a main entree.  Bird, on the other wing, believes these escapades to be the very thing which makes life worth living.

Before they arrive a new resident of the forest, Red, a female squirrel, makes an appearance.  She's a chipper and no-nonsense kind of being.  As she jumps away she warns her new acquaintances to be on guard.  There's something evil lurking in the shadows.

Two of their first discoveries, other than Squirrel's home being much too dusty for his sensibilities, are their source of water is bone dry and a beaver, with a wooden block named Castor for a friend, has built a humongous dam.  The next morning Bird, in search of water, is struck by an astounding idea.  They need a party to celebrate their return.  In their zest for delivering the invitations, once Bird convinces Squirrel to host the festivities, two more startling revelations are presented.  Both of them involve the evil something lurking in the shadows.

In what can only be described as death-defying and heart-stopping scenarios, Bird, Squirrel and a fellow forest dweller find themselves barely alive thanks to the bravado of one spunky squirrel named Red.  The nasty rodents have been thwarted but will they return?  Will the party go on?  Is that smoke and flames in the forest?  The roller-coaster ride of action will tug on your emotions, laughter, tears, hardly daring to breathe and cheering...lots of cheering.


With this latest volume James Burks does not disappoint.  The conversational banter between his characters, especially Bird and Squirrel, is stellar.  They have known each other long enough now to be completely honest allowing us to feel the full force of their personalities.  This for readers can be hilarious and profoundly moving.

Amid their adventures, told almost completely in dialogue, Burks delves into more serious life issues.  He explores the definition of home, the value of friendships and sacrifice in several forms.  Here are two sample exchanges.

Come on, those are the things that make life interesting.  One day you will tell your kids all about it.

It's nothing.  My bird senses are quiet as a mouse.

In the entire time I've known you, your bird senses have never been right.

That's not true.  What about the time we hit the mountain?  My bird senses were spot-on.

Yeah, after we hit the mountain.

I'm glad you asked.
(long pause)
I have no idea.

What?  You always have some crazy idea.

What do you think they're going to do to us?


The cadence James Burks creates with his words is magnified in his illustrations.  It's like we are in the middle of Saturday morning cartoons.  Everything on his pages leaps from those very pages and surrounds us in a colorful collage of sensory perceptions.  You know from looking at the front of the book case (My copy is a paperback.) these two best friends are in the thick of the action and they are off to save the day.  The dastardly eyes looking from darkness lend an extra bit of tension to this scene.  We know things are going to be heated in this volume.  The text is on fire!

The first large image, across two pages, contains the first two lines.  It spans to the left giving a canvas for the publication information.  For many of his pages Burks divides a single page into thirds.  Within each horizontal third there might be a one, two or three illustrations.  With that being said he is not afraid to have elements expand outside a panel or change the shape of a panel to fit the action as when Bird is diving in flight. His framing is with black lines and rounded corners.

In some of his more expressive scenes he breaks this technique giving readers a double-page picture with smaller images placed in a corner.  His sound effects and verbal exclamations are outside speech bubbles adding to their emphasis.  In a word, his facial expressions are fabulous.  You will find yourself laughing over and over again; even when reading this a second time.

One of my many, many favorite illustrations is after Squirrel has cleaned his home from top to bottom wearing gloves and a mask and Bird returns to tell him their river is dry.  Bird tromps into Squirrel's house spreading dirt everywhere.  Squirrel is nearly incoherent. When it finally dawns on Bird what he has done, he apologizes and swishes the dirt under the rug.  The look on Squirrel's face is priceless.


Readers are going to be gleefully glad to get this book and read it.  Bird & Squirrel On Fire written and illustrated by James Burks is outstanding in words and art.  It's one of my favorite graphic novel series.  There has never been a greater need for laughter and this book delivers it wonderfully.  I would plan on having multiple copies on your professional shelves.  You will want to have one for home too.

To learn more about James Burks and his other work please follow the link attached to his name to access his website.  Make sure you enjoy the videos he has posted on YouTube.  You are going to love this collection of favorite scenes in a Twitter takeover to announce the release of Bird & Squirrel On Fire.