Children know a good story when they hear one.  Even if they have never personally experienced the same situations as the characters, they will have empathy for those individuals in a well-told tale.  This story connects to them intimately and emotionally through laughter, tears, fears, and hope.  If the tale is connected to music, it will remain in their minds and hearts far after the final word.

The Okee Dokee Brothers, Joe Mailander and Justin Lansing, have known each other for most of their lives.  Combining their love of travel and music they won a Grammy for the Best Children's Album of the Year 2013 for Can You Canoe? after taking a month-long canoe trip down the Mississippi River in 2011.  In 2013 they walked the Appalachian Trail for a month and in 2015 the duo set out across the West, horse-packing along the Continental Divide for four weeks.  From those two trips they were nominated for Grammy awards for Through The Woods and Saddle Up.

On May 17, 2016 their first book, Can You Canoe? And Other Adventure Songs (Sterling Children's Books) with illustrations by Brandon Reese was released with a CD featuring twelve songs from their three treks.  The tunes invite you to ramble but also include profound life observations like these 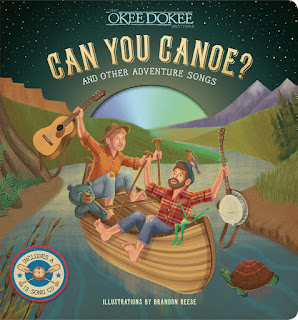 Ya know love is like an echo---
If it's pure and it's true,
Then sing it out to the world
And it'll come back to you.
(Echo)

Move 'em out, move 'em in---
Every story has to end.
But some stay in your heart---
They go round and round;
They get lost and then found
'Cause the end is just another place to start.
(Saddle Up)

Their soon-to-be-released Thousand Star Hotel (Sterling Children's Books, March 7, 2017) written by Joseph Mailander and Justin Lansing (The Okee Dokee Brothers) with illustrations by Brandon Reese is a single tale, similar but delightfully different from a well-known Grimm story.  It is accompanied by a CD with twelve tracks, including a narrated audio version of the Thousand Star Hotel. 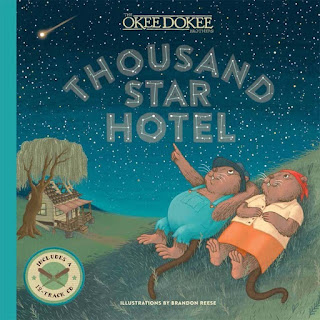 There were once two river rats---muskrats to be exact---who lived in a cabin near a big old river.

To be sure, this cabin had seen much better days.  The walls were cracked and hardly any of the roof was left after a storm.  They were happy as a couple could be except on their daily fishing trips Mr. Muskrat longed to catch one big fish, ensuring them a better life.  He was tired of only having enough fish for one sorry pot of soup each night.

One morning as they were sitting in their small boat, Mr. Muskrat hooked a fish of enormous size.  He thought his heart would burst before they wrestled it to their boat.  When he did, he and his wife could not believe their eyes.  It was a giant shimmering golden catfish.  It spoke.  If they would release the fish, a single wish would be granted.

Initially at a loss for words Mr. Muskrat heard his wife ask for a hammer and some nails to fix their roof.  This shocked him into asking for a big fancy house.  As the fish intoned four final lines, Mr. Muskrat burst forth with

He was sure they could wish for something much better.  This happened more than once with Mrs. Muskrat offering simple and more practical wishes.  Mr. Muskrat, on the other paw, could not stop wishing for abodes grander than the last wish.

Finally Mrs. Muskrat made an astute suggestion which Mr. Muskrat thought was the best idea in the whole wide river.  The magical catfish must have thought so too, because as he uttered ...

he vanished into the river.  Scurrying home, pushed by a forceful wind, Mr. and Mrs. Muskrat were shocked but what greeted them on the outside and the inside of their residence.  What you need is far better than what you want.


Readers will soak up the wit and wisdom penned by The Okee Dokee Brothers in this original narrative straight from the American heartland.  The words are conversational but tinged with the fantastical.  The down-to-earth perspective of Mrs. Muskrat versus the more lavish viewpoint of Mr. Muskrat makes for increased tension leading to the unforeseen but superbly perfect ending.  The rhythmic and rhyming chant of the fish encourages participation.  Here is a sample passage.

After much STRUGGLIN', TUGGLIN', YANKIN', AND CRANKIN',
they managed to catch a giant golden catfish whose scales shimmered like stars.
It burst out of the water and swam up to their boat, peering at the river rats
through big bulging eyes.


You will love to run your hands over the front of the book case.  The title is raised.  If you look closely each letter is formed by connected stars as if they are part of a constellation.  Mr. and Mrs. Muskrat are varnished.  To the left, on the back, is information you would usually find on dust jacket flaps.  The opening endpapers are a teal blue background with bright green willow branches drifting down from top to bottom.  The CD is encased on the left at the front with a picture of the catfish and the river rats.  On the left of the front a phrase from one of the songs reads:

If you're always wishin',
You'll miss the point of fishin'.
Livin' life while you wait
Has always been the best bait.

The same color scheme is used on the closing endpapers.  The willow branches are tied back with red ribbons like curtains to reveal information about the authors and illustrator on the left.  On the right are the credits listing the contents of the CD:  Thousand Star Hotel (audio), Thousand Star Hotel (song), Gone Wishin', King Kong Kitchie Kitchie KI-ME-O, Along For The Ride, Small And Simple, Memphis Town, Sister Moon And Brother Sun, Evergreen, Baby Mine, Lighten Your Load, and Last Lullaby.

Rendered using Photoshop Brandon Reese, using a full color palette, brings the essence of life on the river to his pictures.  Tiny details abound in each image; grasses, flowers and berries on bushes, the weave of a basket, the movement of waves, and the frogs inside a hollow log on the river bank.  Nearly all of the pictures span two pages, edge to edge but several are on single pages within a loose circular frame.  When Mrs. Muskrat and Mr. Muskrat are wishing Reese outlines these visuals in soft clouds.  His background hues reflect the mood and time of day wonderfully.

One of my favorite illustrations is when the fish swims up to the boat.  The golden catfish is raised above the waves taking up the entire left side of the two-page picture with his tail crossing the gutter to the right side.  Rays of light surround him above as water splashes below.  Mr. and Mrs. Muskrat are starring at him open-mouthed and smiling from the center of their small boat.  Mr. Muskrat is holding his pole and Mrs. Muskrat is holding the net.

It is guaranteed your heart will be much lighter and happier after reading Thousand Star Hotel written by Joe Mailander and Justin Lansing with illustrations by Brandon Reese.  The words, artwork and accompanying songs are sure to make this a favorite of all readers, young and old.  I can't wait to share it with students.  Make sure you have this title on both your professional and personal bookshelves.