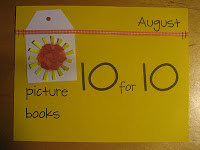 If anyone doubts the truth of time flies when you're having fun, then they need to join in the children's literature community.  Each and every day Twitter and Facebook are filled with people talking about their current favorite titles or those they can hardly wait to read.  I simply can't believe it's August 2015.  For weeks the buzz has been building about this year's Picture Book Ten For Ten.  Co-founders of this event, educators Cathy Mere and Mandy Robek, invited people to participate in recent blog posts.  In 2012 I featured alphabet books.   The next year I could not get my list down to ten titles, so Xena picked her favorite dog books.  Last year I did a companion list to my first year; books featuring counting. 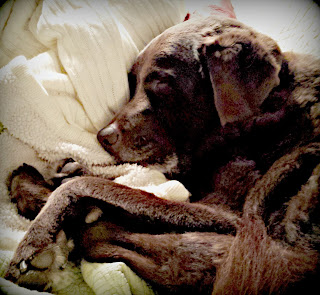 For as long as I can remember bedtime means story time or, as I became an adult, a time kept sacred for reading.  For the last fifteen years this part of the day signals a peaceful interlude.  I listen for the sound of my dog's settling on her bed and her deep breathing as she falls asleep.  It's a feeling that all is right in the world.  To bring this same sense of calm to our children at bedtime is a shared joy.

This year I started this post with a list of twenty-four books.  I pulled out those books with a high laughter factor and those titles focusing more on night and the natural world.  This still left me with thirteen titles.  It wasn't easy but here are ten titles I recommend reading to send everyone to sleep guaranteeing them sweet dreams. 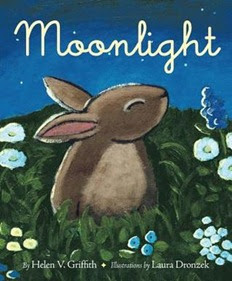 Some winter mornings after a snowfall when the full moon is setting and the sun has started to lighten the horizon, walking in the backyard, I see signs of a party, of dancing by the light of the moon.  Rabbits have left their footprints peppered across the landscape in gleeful circles.  It makes me wonder what happened when I was sleeping and they were not.

Are rabbits the only beings playing in the crispy air?  Maybe something else moves through the quiet hours during the seasons, silently leaving a mark.  Moonlight (Greenwillow Books, January 24, 2012) written by Helen V. Griffith with illustrations by Laura Dronzek whispers an invitation to readers about Earth's lunar orb.


2.  All the Animals Are Almost Asleep (Little, Brown and Company, October 2, 2012) written by Crescent Dragonwagon with illustration by David McPhail 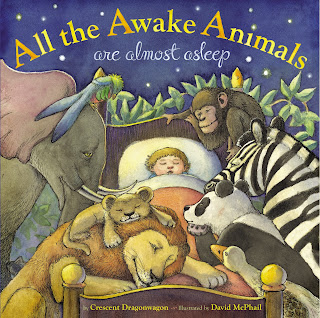 Sleep, the natural periodic suspension of consciousness during which the powers of the body are rested (Merriam-Webster), sometimes eludes those who crave it, comes to those who wish for a little more awake time and is rarely on the immediate agenda of a little boy or girl, unless they're too pooped to protest.  Depending on the little bits and pieces of everyone's day, now brought together, bedtime is either frustrating or a golden opportunity for parents and their children.  The ritual of reading or telling a story when all else has quieted, once begun, lasts a lifetime.

A magical connection is manifested in these moments.  All the Awake Animals Are Almost Asleep (Little, Brown and Company, October 2, 2012) written by Crescent Dragonwagon with illustrations by David McPhail is a tip-toeing alphabetical adventure into the world of animals at day's end.  Soothing slumber will soon follow...guaranteed. 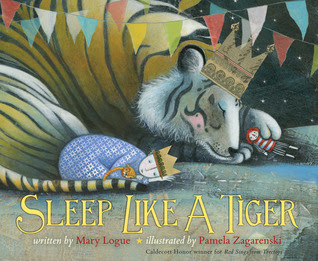 Our bodies are wired to be active during the daylight and desirous of sleep as nightfall approaches.  Of course, most little guys and gals will have nights when they can truthfully say sleep is the last thing on their minds.  They have a multitude of other activities they would rather be doing; anything but sleep.

Thankfully there are caregivers, parents, who can remember those nights as a child feeling energized, wide awake and ready to go.  Those memories fuel their wisdom.  Sleep Like A Tiger (Houghton Mifflin Books for Children, October 23, 2012), a first picture book written by Mary Logue with illustrations by Caldecott Honor winner, Pamela Zagarenski, is like watching treasured moments from a bedtime ritual.

4.  Once Upon a Northern Night (Groundwood Books, House of Anansi Press, July 30, 2013) written by Jean E. Pendziwol with illustrations by Isabelle Arsenault 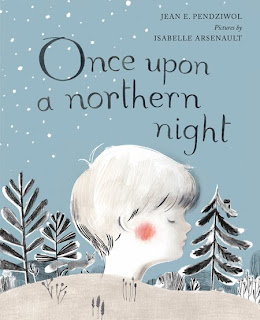 Over the years, winter has become my favorite season of the year.  There is nothing I enjoy more than hiking through the snow with Xena on a calm night. The air is so clear; the stars seem to hang from the heavens like crystals on a celestial chandler.  As we pause in the stillness, there is no sound other than our breathing.

When the final page is read and the cover slowly closed, there are books which cause the same stillness to surround a reader.  Unlike the perfect frosty evening, with each reading the same feeling can return any day all year long.  Once Upon A Northern Night (Groundwood Books, House of Anansi Press, July 30, 2013) written by Jean E. Pendziwol with pictures by Isabelle Arsenault is an exquisite portrayal of nature's nocturnal harmony.  It's a song of love to life. 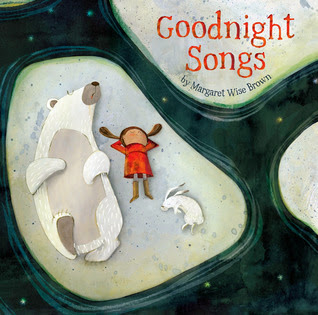 If we trust our instincts, follow a hunch, the results are frequently surprising in the best possible way.  It's almost as if some unseen hand is guiding our way.  Untold treasures await us.

Twenty years ago, Amy Gary, editor of the Margaret Wise Brown Estate, on a whim asked Brown's sister, Roberta Rauch, if she knew of any unpublished works.  Can you imagine hearing an affirmative reply? Stacked in a trunk kept in the attic of the barn on her Vermont farm were pages and pages of poems, stories and musical scores.  Last week some of those gems were released into the world, collected in a title, Goodnight Songs: Illustrated by Twelve Award-Winning Picture Book Artists (Sterling Children's Books, March 4, 2014).  The words of Margaret Wise Brown have been visualized by Jonathan Bean, Carin Berger, Sophie Blackall, Linda Bleck, Renata Liwska, Christopher Silas Neal, Zachariah OHora, Eric Puybaret, Sean Qualls, Isabel Roxas, Melissa Sweet and Dan Yaccarino.

6.  May The Stars Drip Down (Abrams Books For Young Readers, March 11, 2014) written by Jeremy Chatelain, a musician, with illustrations by Nikki McClure 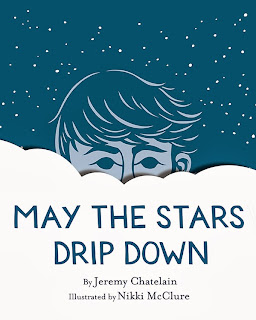 Every parent wishes for their children a peaceful, deep rest each night.  Most will agree seeing their son or daughter (no matter their age) sleeping is perhaps the sweetest thing in the whole wide world.  It seems as though the bond between parent and child becomes even stronger in those moments; the act of sleeping is one of trust.   It's a condition when we are more vulnerable.

Caregivers may read favorite books aloud, insure treasured toys and cozy blankets are near or softly sing a beloved melody.  May The Stars Drip Down (Abrams Books For Young Readers, March 11, 2014) written by Jeremy Chatelain, a musician, with illustrations by Nikki McClure is a lullaby of love.  A boy's dreams are choreographed masterfully in words and torn and cut paper illustrations. 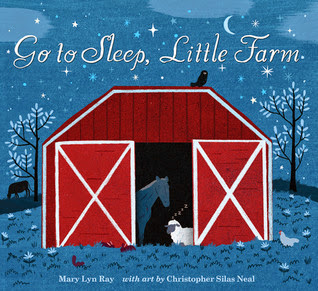 As if on some internal clock, a stiff breeze blowing throughout the day will calm as dusk descends.  Squawking blue jays, save further chiding for tomorrow.  Bright blooms fold their petals until the sun welcomes with warming rays in the morning.

A busy pace is slowing. In Go To Sleep, Little Farm (Houghton Mifflin Harcourt) written by Mary Lyn Ray with art by Christopher Silas Neal readers are gently lead about the farm, surrounding fields, and nearby woods as night falls.  Inside the house a little girl mirrors the animals and their activities as she and her family welcome bedtime.

It doesn't have to be at the end of the day.  It could be anytime.  Pausing to appreciate someone, something or somewhere simply is not done enough. 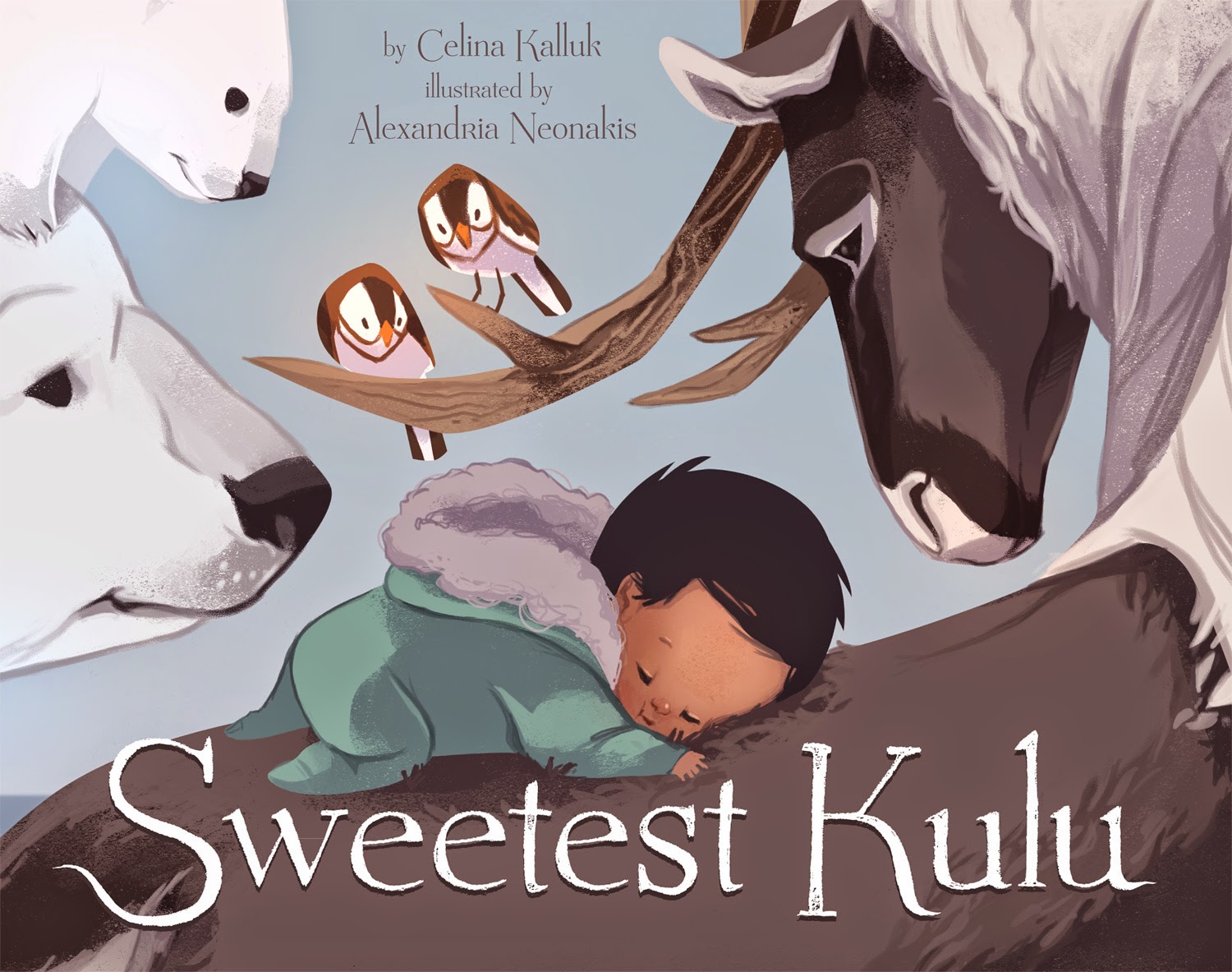 Yesterday I wanted to stop at the top of a hill I have descended hundreds of times, so struck by the beauty of the swath of colorful trees bordering along and up from the shores of a harbor in a nearby town.  I knew the other motorists speeding by would not be appreciative.  For more than the thousandth time as I walked my marvelous old dog last night, I felt a huge thankfulness and affection for the sound of her breathing as she slowly paced along a well-known path.   When we acknowledge the importance of someone, no matter their age, both parties are the better for it.

When reading Sweetest Kulu (Inhabit Media Inc., November 1, 2014) by Celina Kalluk with illustrations by Alexandria Neonakis, I felt a sense of deep compassion.  Most notable within the narrative is the birth of a child as an occasion to be revered and celebrated.  The natural world is tightly woven into, an intricate part of, the Inuit culture. 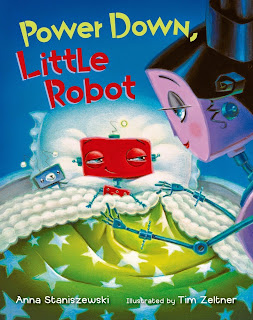 As soon as the words are uttered by an adult, the children show an unprecedented genius.  Plans worthy of a seasoned general are put into place.  It's a battle of strategy and wits.  Even if the guys and gals previously seemed to be slowing down, the sound of "It's time for bed" will energize them into action.

They will develop a thirst similar to an individual wandering the Sahara for days without a drop to drink.  A need for clean pajamas, the brushing of teeth, another trip to the bathroom, forgotten homework needing to be completed by morning, and please, pretty please, just one more story will be only a few of their moves for avoiding the dreaded bedtime.  Power Down, Little Robot (Henry Holt and Company, March 3, 2015) written by debut picture book author Anna Staniszewski with illustrations by Tim Zeltner gives a unique spin to the nuts and bolts of a daily ritual.

10.  You Nest Here With Me (Boyd Mills Press, an imprint of Highlights, March 3, 2015) written by Jane Yolen and Heidi E. Y. Stemple with illustrations by Melissa Sweet 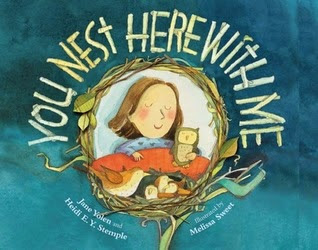 When the leaves fell from the trees, there it was.  It's no bigger than the size of a golf ball.  Through the cold, rain, thunder, lightning, sleet, snow and wind, it has endured.  It's so secure; you can almost imagine it as a part of the branches which hold it.

Out of habit, I look every single day to make sure it's still there, wondering about the parents who crafted it so well.  I think of other questions.  What kind of birds lived there?  Did all the babies fly away?  Will any of the birds come back?  You Nest Here With Me (Boyd Mills Press, an imprint of Highlights, March 3, 2015) written by Jane Yolen and Heidi E. Y. Stemple with illustrations by Melissa Sweet is a soothing lullaby of birds and their homes.

WOOF! WOOF!  I guess Xena wants to add one more title to the list.  After she had her own post in 2013, she feels the need to give us a canine perspective.  This title is most definitely funny.

11.  Time for Bed, Fred! (Walker Books For Young Readers, an imprint of Bloomsbury, February 11, 2014) written and illustrated by Yasmeen Ismail

On any given day, depending on whom you talk to or the hour, most will agree the passage of time is tricky.  For the most part it goes faster than intended, especially if you are enjoying a particular activity.  Whether anyone is willing to admit it or not, age is definitely a factor.  It's been said the perception of time going faster the older you are is because you are not experiencing nearly as many first-time events.

Endless energy seems to go hand in hand with youth as does leaping from one endeavor to another numerous times between awakening and falling asleep.  It's no easy task to turn off all that get-up-and-go.  If you think little humans are the only ones with all this zest, zip and zing, think again.  Time for Bed, Fred! (Walker Books For Young Readers, an imprint of Bloomsbury, February 11, 2014) written and illustrated by Yasmeen Ismail (born in Dublin, now based in London) follows a cutie-pie pooch that is simply not ready for rest and relaxation.

Feel free to add any of your favorite titles in the comments.  Happy reading to all of you!
Posted by Xena's Mom at 12:20 AM