When looking at bodies of water, ponds, lakes, small and large, seas and oceans I do so with a great deal of reverence and respect.  Firsthand experience at an early age, nearly drowning during a swim lesson at the YMCA as the instructor chatted on the deck with someone, taught me the power of water.  As an adult getting caught in a sudden squall on a twenty-six foot sailboat on the Atlantic Ocean and nearly falling overboard the same day due to a rogue wave (a portion of the rigging saved me but gave me a baseball-size lump on my check), reinforced my beliefs. 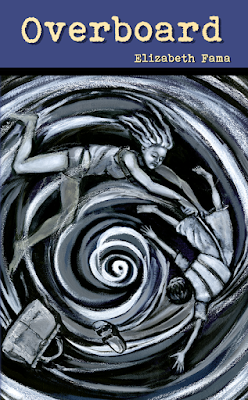 My admiration for every swimming feat performed by humans continues to grow story by story.  Overboard (First edition, 2002, Cricket Books, Carus Publishing) has been recently released in a print-on-demand version.  A debut novel for Elizabeth Fama it garnered a unanimous decision to be placed on the 2003 Best Books For Young Adults list by the American Library Association.

Emily might have been the only fourteen-year-old in the world who could change the sheets of a hospital bed with the patient still in it.  She had done it more times than she cared to remember.

Emily lives with Olivia and James, her parents, in Banda Aceh on the island of Sumatra.  Both of them are doctors working in a clinic as part of an international program, moving every two years.  Fair-haired, light-skinned Emily longs to return to Boston to attend school and be with her friends.  Her physical appearance causes her to feel like a freak.  The heat and humidity make her situation even more oppressive.

Her uncle, Matt, tries to get her parents to let her join him on the nearby island of Weh for a bit of a vacation but they want her to stay with them.  A death at the clinic for which Emily believes she is responsible has her running away toward the ferry headed for Weh.  Without a word to anyone, it's a decision placing her life in jeopardy.

The holiday of Ramadan has more than normal amounts of people using the ferry.  It hardly looks seaworthy but after several hours wait it leaves the docks.  Two British tourists Richard and Catherine strike up a conversation with Emily but moments later it's apparent by unusual activity of the crew, the ferry is in trouble.  Life vests are being thrown to passengers.  Emily snags one but without a second thought gives it to a young boy.

Shoved into the vest cabinet by panicked passengers, Emily is locked inside.  Liquid fills every space as the ferry sinks.  In a fierce battle with the water and her own thoughts she makes it to the surface of the sea.  Relieved to find Richard and Catherine in the growing darkness, little does Emily know the fight for survival is just beginning.

People turn into crazed individuals while attempting to secure a spot on a life raft, exhausted people make terrible choices, sharks swirl around the groups of passengers, and then following a distant speck of light, alternately swimming a variety of strokes or using her make-shift floaty,  Emily hears soft crying.  Following the sound she discovers the boy, the very boy to whom she had given the vest.

Sometimes an uneasy and at other times an appreciative relationship develops between nine-year-old Isman and Emily as hour after hour passes during the night and into the next day.  Each has lessons for the other to learn, practical means of existing in the water and spiritual practices of the Islamic faith.  In a further stunning turn of events a heart wrenching decision is made as the story spins toward a resolution.


As soon as the first chapter readers can understand the good intentions of the parents but through the writing of Elizabeth Fama we are drawn in empathy to Emily.  It's extremely hard to endure a situation not of your own choosing; especially when you believe your opinion and desires are thought to be insignificant.  We readers will come to realize as does Emily, it could always be worse.

Each chapter ends with an important thought, conversation or statement.  These propel you forward quickly to the next page, cause you to knowingly nod or pause wondering what you would do in similar circumstances.  Even before the ferry accident the mood created by Fama's writing is intense.

Emily's conversations when she is alone are exquisitely written; an exploration of self in the midst of survival.  The portrayal of Isman and the strength he finds in his faith in the face of overwhelming odds will go straight to your soul lifting it up.  Some of the scenes between Isman and Emily will bring readers to tears.  The contrast provided by the British couple's understanding of the people and Emily's points out to readers that while Emily is not happy living in Indonesia, she does have insights into the culture of the people.  Here are some sample passages.

Before she could hear an answer, she was pulled under the water.  She didn't have time to catch a breath.  Someone, something, was dragging her under from behind.  She felt water churning in front of her face.  She scraped at the water with her hands, losing her leggings-float.  She didn't feel any pain, but she was sure it was a shark.

She focused on the stars again and one little point of light moved down in a streak.  For a fraction of a second she thought it was a plane, but it was clearly a shooting star.  Half a minute later, another.  The longer she looked, the more she saw.  A beautiful light show, hundreds of miles away.  No, not really a light show.  These were bits of rock or dust, burning up as they traveled through the earth's atmosphere.  They were lifeless meteors that cared nothing for her.  They weren't shooting for her; they weren't shooting for any human beings.  They had shot long before humans were on earth, and they would shoot long after humans were gone.  Look at that sky, millions of miles deep.  Nothing in that incredibly full sky cares about humans, or about the silly, stupid things we do.  Humans are the only things that care about humans, and in the end we don't even do that very well.

Isman held up the bitten tomato.  "This is from Allah.  No matter who grew it or who bought it.  Allah alone made this tomato possible.  I try to remember whatever I have---whatever I love---comes from God.  Saying the ninety-nine names helps remind me."
He took a last measured bite and handed Emily the rest.
"My father says that nothing belongs to us in this world, Ehm-lee. This is why we share our good fortune with others, and give alms to the poor.  This is what we learn; that everything is on loan from God."


When you start to read Overboard written by Elizabeth Fama you need to make sure your time is free because there is no stopping until you are finished.  It's a highly captivating story of survival and human growth in an extreme situation.  It defines page-turner.

In her Author's Note at the conclusion of the novel Elizabeth Fama explains the true events on which this story is based.  To learn more about Elizabeth Fama and this book please visit her website by following the link attached to her name.  She has included a discussion guide for educators on themes and ideas important to her when writing this book.
Posted by Xena's Mom at 10:49 PM