There are any number of reasons a book ends up on your to-be-read stack.  In the case of one of my most recently read titles, a middle grade novel, it was first a reference made on social media about the illustrator creating the artwork for the dust jacket and interior images.  This particular illustrator, John Hendrix, is respected for his signature depictions of history.  His interpretations and details direct our attention to the most fascinating aspects.

When mystery, history, Chicago, and two spirited female characters are words used to describe the story, the intrigue heightened. 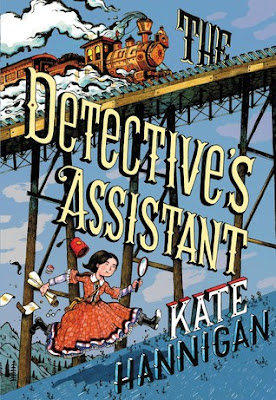 A copy, ordered in February, of The Detective's Assistant (Little, Brown And Company, April 7, 2015) written by Kate Hannigan arrived shortly after the release.  Weeks went by with the cover and promise of a marvelous tale calling to me.  I finally ordered another copy in audio format so every time I drove my car, I could follow the adventures of the characters.  (At this point I have to admit, I did, more than once, sit in my driveway and garage unable to stop listening.)

Before the first page, a single eye looks directly at the reader with the words

written beneath the picture.  This is, as you will soon discover, the logo for the Pinkerton National Detective Agency.  With a page turn, the narrator, Cornelia, begins the story.

You're expecting me to do what?" snapped a peevish voice from the other side of the heavy wooden door.  It opened just a few inches to allow a single blue eye to survey me up and down.  "Take in this gangly urchin you claim is one of my kin?" One look tells me the child hasn't made the acquaintance of a bar of lye in a good many years, not to mention been in the same two-mile vicinity of a comb."

Cornelia, Cornie to her friends, has been left at her only remaining relative's door in a Chicago boarding house; the Right Reverend Abernathy having thrown paperwork toward the woman and skedaddled down the stairs and out into the street.  Her widow aunt, Kate Warne, who she calls Aunt Kitty, wants nothing to do with Cornelia including her name.  Within minutes Cornelia has been given the title of Nell Warne.  Now in all fairness to Kate Warne, you can understand her indifferent, rigid attitude toward Nell once the past is revealed.  Nell's recently deceased father, who was shot to death, had years earlier accidentally, under mysterious circumstances, shot his brother, Matthew Warne, Kate's husband.

To Nell's utter distress the next morning her aunt announces her intention to place her in the Home for the Friendless newly located on Wabash Avenue.  Thankfully a pickpocket, Nell's quick thinking and an injured knee alter the course of events for that day.  The next morning a routine is established with Nell helping the owner of the boarding house, Mrs. Wigginbottom, with shopping to help ease the newly inflated rent due to her presence.

Nell is astonished to learn during a trip to town her aunt's occupation as a detective in the Pinkerton National Detective Agency.  One thing you should know about Nell is while her command of the English language in speaking and writing is not refined, she enjoys keeping up-to-date on the latest happenings by being an avid reader of newspapers.  You can't imagine Nell's surprise when an ad in the paper announcing the presence of the Seventh Daughter of a Seventh Daughter, Madam L. L. Lucille, a fortune teller, turns out to be part of a plan to snare a criminal.  Aunt Kitty is masquerading as Madam L. L. Lucille and at the last minute Nell will be playing a part in the ruse.

This is the first in a series of cases in which Kitty and Nell work together along with the other detectives at the agency even though it's due to circumstances rather than choice by Kate.  Her determination to find another place for Nell is met in full measure with Nell's desire to stay with her at the boarding house.  The tension between them ebbs and flows as respect for each other grows.

In letters received and sent to her best friend Jemma, a free-born African American, now living in safety in Canada, we come to have a clearer picture of the night Jemma's family ran to freedom and Matthew Warne was killed.  As pieces in each case for the Pinkerton National Detective Agency are put together to create a solvable whole, Nell works to clear the name of her beloved daddy, Cornelius.  A meeting with the Maple Tree and a harrowing train ride with a disguised distinguished guest ease and elevate anxiety and fear. As the pace quickens when pages are turned, readers' hearts will race as we are lead to a conclusion blended in liberty, inevitable war and the strength of family.


When you read the words penned by Kate Hannigan you are well aware of two things:  her meticulous research and skill as a storyteller.  Like her character Nell she can tell a captivating tale.  Several techniques add to the experience of the reader.  Each chapter is captioned with a statement alluding to the nature of the events to come;

In Which I Share My Woe
with My Best Friend, Jemma

In Which I Fall Victim
to the Silent Sit

In Which Aunt Kitty Transforms
into a Southern Belle, and
I Get a Bit Choked Up.

Nell's descriptions of her surroundings, the details of the cases and disguises worn, and the conversations between all the characters are like stepping into the years of 1859 to 1861.

The letter writing between Jemma and Nell is a brilliant bridge between the present and the past.  The girls each hint at the truth of both their lives, then and now.  They devise a cipher system for conveying information.  Too much said by either of them could put family members in danger as well as themselves.

Here are some sample passages from the book.

Aunt Kitty pounced on me as if I'd uttered a profanity right there on Washington Street for all to hear.  Color rose up in her cheeks and turned them as red as radishes.
"Why would Mr. Pinkerton hire me, a woman?  Because I can go where a man cannot---I can befriend the wives and girlfriends of criminals, and I can worm out their secrets.  I can go where no one suspects me.
"And because I was not put on this earth to spend my days filing a man's papers or writing down every word he utters---nor washing trousers and darning his socks.  Because I can do most any job a man can do, and maybe even do it better.
"I can do great things, Nell Warne.  And so can you."

"School," she repeated.  "You need the firm hand of a schoolmarm, Nell.  We will enroll you today."
She sounded determined.  It was time to take drastic measures.
"Aunt Kitty," I began, trying out her same cool delivery just to see how it would go over, "these schools here in Chicago have seventy, maybe one hundred kids in each classroom.  If you make me go, I'll catch the croup and die before Christmas."
She did not look moved.
"Or I might pick up foul language and rough habits."
She merely cleared her throat and dusted at her sleeve.
I was not getting through.
"Or even worse," I whispered, watching her lean in a bit closer to hear me.  "Head lice."
Aunt Kitty gasped and shot both hands to her tidy brown hair.
Conversation over.  I would take my lessons at home.


The Detective's Assistant written by Kate Hannigan is an action-packed adventure brimming with suspense, larger-than-life characters and historical figures, humor and the importance of making and keeping family ties.   Hand this title to anyone who craves a mix of the past with excitement and fear and questions and answers.  As a read aloud this will be outstanding.  It not only gives us glimpses into important places of the day, the Pinkerton National Detective Agency, the first female detective in the United States but also addresses slavery, abolition and the Underground Railroad.  At the conclusion Kate Hannigan provides an extensive Author's Note, Answers to Ciphers and an If You Want to Read More section.

To discover more about Kate Hannigan please visit her website by following the link attached to her name.  You can read several chapters from the beginning of this book at the publisher's website. (Trust me; you will not be able to put this book down once started.)  Take a moment to read this article and interview, Kate Hannigan on Kate Warne: New book brings 19th century detective to life, in the Chicago Tribune.  Enjoy this video interview with Kate Hannigan by Becky Anderson of Anderson's Bookshop.