Fear is a curious thing.  We can carry it with us constantly for reasons easily explained or for no reasons at all.  Fear can creep up quickly causing us to go from calm to panic in mere seconds.  Some fears are shared.  Other fears belong to the individual alone. 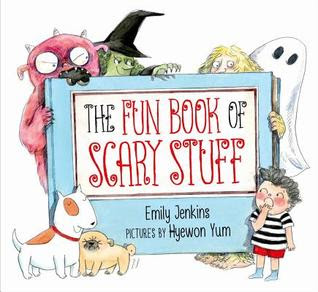 People may tell us to face our fears but what they should really do is encourage us to assess each situation, if possible, weighing the reality of whom or what gives us the jitters or fills us with dread.
The Fun Book Of Scary Stuff (Frances Foster Books, Farrar Straus Giroux, August 11, 2015) written by Emily Jenkins with illustrations by Hyewon Yum is a lively look at one boy's fears.  His two canine companions join the conversation.

Dad says I should make a list of everything that frightens me.  He says it will help me be brave.

The bull terrier with a shake of his head voices his opinion of the dad.  His boy agrees. This dog wants to know what scary things the boy put on his list.  Not sure the dog can endure the sheer terror of those listed items, he is hesitant.

Of course the bull terrier proclaims his fear of absolutely nothing.  With confidence the boy shares the position of monsters; they're at the top.  It doesn't help what the boy's mom says about monsters and staying in his own bed.  The dog cleverly points out how he never sleeps in his bed but on the boy's bed.  He goes on to say ghosts are afraid of dogs when the boy mentions them.

Cauldron stirring witches make an appearance but mister-I'm-not-afraid-of-anything is sure it's something to eat rather than a hex.  With total lack of tact he points out how the boy seems to fear things which might not be real.  Irritated by this remark a particularly nasty relative is named.  Joining the discussion the pug admits his lack of fondness for this obnoxious cousin.

The boy names three other possible encounters found in their neighborhood which give him and the pug the willies.  The nonchalance and downright laughter they receive in response leads him to mention the final thing---the dark.  In a twist, perhaps bolstered by the remarks of the bull terrier, the boy is able to banish another's growing alarm.  It's time for treats given in love.


Tapping into her inner dog, Emily Jenkins gives the personalities to the boy's bull terrier and pug perfect for them and their relationship with him.  The casual way they all feel free to express themselves openly supplies ample opportunities for outbursts of laughter for readers while revealing how much they care for each other.  In the course of the narrative, told entirely in dialogue, the rhythm is formed with the boy naming a fear and why it's scary with the dogs either agreeing or pointing out why it might be unfounded.  This makes the twist even better.  Here is a sample passage.

THE CROSSING GUARD BY SCHOOL
Hee Hee!  Scared of the crossing guard. (Bull terrier)
She's so bossy. (Boy)
I'm scared of her, too.  She smells like gasoline. (Pug)


On the matching dust jacket and book case, we are introduced to the three main characters and some of those things the boy finds scary; things other readers might find frightful, too.  You can readily see which of the three are not comfortable and which one is confident in the face of unnerving situations.  On the back, to the left, Hyewon Yum cleverly depicts the view of the front as if we are looking at the back of the scene.  The opening and closing endpapers are the same shade of red as the text color on the jacket and case.

The title page background looks like notebook paper; the same used by the boy to make his list.  The three characters are named.  The humor begins immediately with

Bull Terrier the Bravest Dog Ever.

On the verso and first page the trio starts the story.  White space is used as an element in many of the pictures to bring the dogs and the boy to the center of our attention.  Speech bubbles hold their comments.

The pacing of the narrative is enhanced with the variations in illustrative sizes.  For most of them the scary thing is introduced with a single page visual followed by a group of smaller ones.  Several times Yum inserts double-page images for impact.  This works to great effect when moving from the fear of the swimming pool to sharks.

One of my favorite illustrations is for the dialogue highlighted above.  It spans across two pages.  On the left the bull terrier is rolling on the ground in laughter at the boy and the pug.  The boy looking fearful is supported by the pug looking disgusted at the bull terrier.  In the center of the crosswalk a rather formidable, frowning crossing guard stands with outstretched arms.  Wearing a whistle, vest, official hat, white gloves and orange-tinted sunglasses as extras to her pants, shirt and boots, she presents an imposing picture.  Behind them a woman driving her care has stopped.  She's looking a little scared herself.


Addressing fears, real or conjured in his mind, The Fun Book Of Scary Stuff written by Emily Jenkins with illustrations by Hyewon Yum will generate giggles and grins during any reading.  Possible voices to use for the characters promptly pop into your mind based upon the charming, detailed illustrations and the heartfelt words each speaks.  You couldn't have picked a better title as this book truly helps us to see the lighter side of scary stuff.

To learn more about Emily Jenkins and Hyewon Yum please take the time to visit their websites by following the links attached to their names.  At the publisher's website eight interior images can be seen.
Posted by Xena's Mom at 8:21 AM