Let's suppose you wake up this morning expecting nothing to be out of the ordinary.  Every day of your thirteen years has been the same.  You live in one of the safest communities in the United States.   There is literally no crime.  There is also no poverty or homelessness.  Every family lives in a highly maintained home with a swimming pool and a tree house.  Most of the parents work in a factory, the largest manufacturer of orange traffic cones. 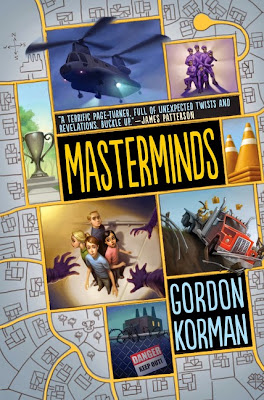 In the first book of Gordon Korman's new trilogy, Masterminds (Balzer + Bray, an imprint of HarperCollinsPublishers, February 3, 2015), the town of Serenity, New Mexico is wearing a mask to conceal its true purpose.  In a population totaling 185, some of the thirty children, most who have never left the city limits, are about to make a startling discovery.  It will cost them everything.

It's a one-in-a million shot, and we nail it.
Just not in the way we planned.

Eli Frieden and his best buddy, Randy Hardaway, have, in an attempt to perform an unprecedented feat, lodged a boomerang in the Hardaway pool filter.  Deciding to tell no one about this little problem leaves Eli feeling uncomfortable.  No one in Serenity lies or, in this case, fails to confess.

Randy is bored with the usual antics in which the two find themselves.  His suggestion to ride out of town to an abandoned hut to see an old sports car, an Alfa Romeo, he and his dad found while hiking, sounds great to Eli; something he might want to do but has been afraid to try.  When they ride past the Now Leaving Serenity---America's Ideal Community sign, Eli begins to get sick; not from worry but deathly ill.

As sudden as a finger snap, a military-style helicopter descends near the boys.  From inside come six Purple People Eaters, the children's name for the factory security force and town police.  They take the boys and their bikes away, Eli to the clinic, Randy to his home.

Within days for the first time in any child's memory, one of them is leaving Serenity for good.  Randy Hardaway is being sent to live with grandparents Eli barely knew he had.  His parting words to Eli,

are the first pieces in an astounding puzzle.  Several weeks pass without Eli receiving so much as a syllable from Randy.  A mystery needs to be solved.  Clues need to be gathered.

In separate chapters other children in the community are introduced to readers.  We meet Amber Laska, a zealous supporter of all things Serenity (honesty, harmony and contentment), Malik Bruder, the doctor's son, anxious to leave Serenity as soon as he can, Hector Amani, small in stature but big in heart, shadow and friend to Malik and Tori Pritel, best friend of Amber, artistic, curious and outspoken.  We are privy to their thoughts about events in the town and conversations between parents and their children and between the main characters.  A skateboarding accident, a hidden letter, an electrical storm, and a passel of pills heighten the tension.   As the action accelerates, the five realize there is no one but themselves they can trust.  One thing becomes perfectly clear, in order to live, they must...


In using the younger characters as first person narrators, Gordon Korman hooks readers instantly and completely.  While the dialogue between the children is realistically accurate, what the adults are saying will give you the shivers.  The contrast Korman builds between perceptions and truth, chapter by chapter, will have you turning pages as fast as you can until you read the marvelous final sentence.

His descriptions of all the events, especially those done without adult knowledge, are detailed enough to make you a part of the action.  You will find yourself laughing, cheering and holding your breath.  The very setting will give you pause.  Could this happen today?  Is it already happening?  Here are some sample passages.

And then it comes to me.  I can picture the layout of things from all perspectives.  Obviously, it's connected to being an artist, but it's more than that.  I understand how things work---like I can envision the finished puzzle before anybody puts the pieces together.  It's not anything I do; I just know.

I follow, whispering, "Careful!" I can see what he can't---that he's back in view of the Hardaways' couch.  At least he's got the brains to keep low.  I duck behind a deck chair as he leans over the edge of the pool and reaches into the filter.  He digs around for a few seconds, his arm in the opening up to his shoulder.  I catch a glimpse of his prize in the moonlight---

Miracle of miracles, both my parents are dead to the world in twenty minutes of crawling into bed.  Go figure.  Those fans are so droning and monotonous that I almost drop off myself.  Wouldn't that be classic---to snooze through my own break-in?
I don't even have to tiptoe as I slip out of the house.  My folks wouldn't hear it if I left on horseback at the head of a brass band.


You are definitely going to want more than one copy of Masterminds written by Gordon Korman.  Guys and gals are going to read this in a flash, nearly wishing the second book into existence with their wanting to see what happens next.  Stunning unforeseen plot twists make this a book to remember.

For more about Gordon Korman and his other titles please follow the link attached to his name to access his website.  Enjoy reading the first four plus chapters thanks to the publisher.