Barking It Up In The Bayou

There has not been one single day since Xena entered my life, more than fourteen and one half years ago, when I have not longed to speak with her.  It most certainly would be simpler to share our thoughts verbally.  Instead we have a fine-tuned system of reading each other's body language, realizing certain words are attached to certain moments and knowing what specific snorts, growls, and barks convey. Sometimes I think when you have worked harder for understanding your relationship is better. 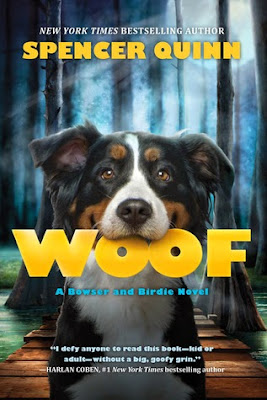 You may be familiar with Spencer Quinn as the writer of the Chet and Bernie series for adults or as Peter Abrahams, author of The Outlaws of Sherwood Street series and The Echo Falls Mystery series for middle grade readers.  Using the pen name of Spencer Quinn Peter Abrahams is beginning another series with a dog as the narrator.  Woof A Bowser and Birdie Novel (Scholastic Press, April 28, 2015) is certain to receive a four paws up plus a vigorous tail wag from the canine crowd (and their human pals too).

TWO HUMANS STOOD OUTSIDE MY CAGE, A
white-haired woman and a gum-chewing kid.  Gum chewing is one of the best sounds out there, and the smell's not bad, either.  I liked the kid from the get-go.

Grammy and her granddaughter, Birdie, age eleven, are at the shelter fulfilling a birthday wish. A large mutt has caught Birdie's attention.  To his complete and total joy he soon tastes freedom riding in the front seat of Grammy's beat-up pickup truck.  Their arrival at the Gaux Family Fish and Bait is tainted by the discovery of the family heirloom, Black Jack, a mounted black marlin, missing from a prominent space on the wall.

Right away Birdie brings a noticeable scent to everyone's attention including the local sheriff but it is dismissed because Bowser is the only other being who can detect its prominence.  He likes it so much; she leads her to the source of the odor.  Birdie thinks he's a genius.  Bowser knows what he likes, pure and simple.  He has no clue that it's a clue.

As if the missing fish is not enough of a mystery, on a visit at Rory's house, the sheriff's son, Birdie learns of a treasure map.  Supposedly on his return home from serving overseas during World War II, Grammy's dad took long rides by himself into the bayou.  The story of those treks and the map are two more pieces in a growing puzzle.

Clandestine journeys in the dark of night, entering forbidden buildings, frightening swims in the black bayou water, an attempted kidnapping, a dog chase revealing more than Birdie's buddy can process, strange visitors, and a too-close encounter with a monster create action nearly faster than Bowser can run.  And that's pretty fast, folks.  Secrets are shared.  Secrets are kept.  The truth is consumed in a conclusion leaving you gasping for breath.


Spencer Quinn removes us from where we might be reading to the bayous of Louisiana.  His descriptions of the small town and its inhabitants envelop us like the heat and humidity found there.  Care is given to the details of the buildings, homes and the layout of the streets and roads.

Each of the characters, residents and visitors, friends and foes, are revealed in the dialogue heard and explanations supplied through Bowser's narration.  Using a canine viewpoint gives us a true sensory experience and a whole bunch of side-splitting humor.  Bowser's roundabout perceptions coupled with Birdie's more linear ideas give us a unique trail to follow.

Relationships are introduced and explored through a series of incidents; Birdie's online chats with her absent mother and her mention of the town public librarian, eavesdropping on Nola's (Birdie's best friend) sister and company in the dead of night, casual encounters with Rory, the sheriff's methods of investigation (He's no Barney Fife.), questions and answers with Snoozy, an employee who slept through the fish theft and his uncle Lem who once coached Birdie's late father, the Straker family members who own the competitive business and treat the Gaux family with distain, visiting old Maybelline at the local assisted living complex and Grammy's constant care of Birdie and reluctantly of Bowser.  These people are as real as real can be; a dog's nose knows.  Here are a few of the many notable passages from this book.

Was this a good time for growling?  Probably not, which I didn't realize until it was too late.  I should have been doing everything I could to make a good impression.  But you'd be growling yourself if the reason you ate like a bird was because you got feed like a bird.  And, by the way, the whole thing about birds not eating much needs looking into.  Ever seen one of those little red-breasted ones gulp down a long, fat, struggling worm?  Enough said.

For example, in the human world you've got those who take regular showers and those who don't.  Snoozy was of that second type.  His smell reminded me of a hunk of old cheese I'd once found at the bottom of a tipped-over trash barrel, only more so.  I'd left that hunk of cheese strictly alone, believe you me, except for one quick taste, or possibly two.

"Eyes peeled?" Birdie said, like she hated the idea.  I was with her on that:  It sounded horrible.

"Yikes---what was that?  Did you feel something?"
Huh? Why did Birdie look so scared, her face all twisted in the moonlight?  All I felt was the bayou, bubbling pleasantly by, although in those bubbles I did pick up an odd smell---snaky, but not snake.  Froggy, but not frog.  Toady, but not toad.  Lizardy, but not lizard.  I sniffed the air.


Hand this book off to your readers loving non-stop action, mystery to the max, characters ready to walk off the pages and loads of laughter courtesy of a lovable dog.  Woof A Bowser and Birdie Novel written by Spencer Quinn is a run on the best side there is; sheer fun.  Dog lovers are going to gobble this up in big bites.

To learn more about Spencer Quinn please visit his website by following the link attached to his name.  Scholastic has devoted a page to this new series to be found by following the link attached to the title.  An excerpt from this book is there.  Start reading people.  You'll be ready for the next book as soon as you finish the first.  The cover reveal is coming soon.
Posted by Xena's Mom at 10:46 PM