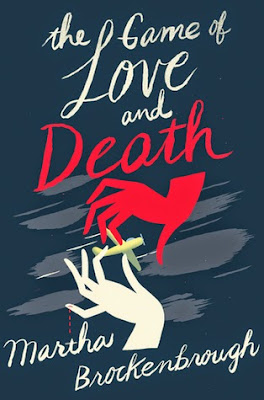 On April 28, 2015 her newest title, The Game of Love and Death (Arthur A. Levine Books, an imprint of Scholastic Inc.) was released.  I could hardly wait for the weekend to begin reading it.  In fact, I didn't quite make it to Saturday.

In a moment of weakness I read the first page of The Game of Love and Death @mbrockenbrough before work was done. See no sleep in my future.
— Margie Myers-Culver (@Loveofxena) May 1, 2015

It was followed by these tweets.

Dear @mbrockenbrough I am up to chapter 35 in The Game of Love and Death. The story is mesmerizing. The writing is exquisite.
— Margie Myers-Culver (@Loveofxena) May 3, 2015

My eyes are filled with tears. I have finished the remarkable book The Game of Love and Death by @mbrockenbrough Oh my goodness Martha!
— Margie Myers-Culver (@Loveofxena) May 4, 2015

Chapter 1
Friday, February 13, 1920
The figure in the fine gray suit materialized in the nursery and stood over the sleeping infant, inhaling the sweet, milky night air.  He could have taken any form, really:  a sparrow, a snowy owl, even a common housefly.  Although he often traveled the world on wings, for this work he always preferred a human guise.

With this first paragraph we readers step into a world we will not easily be able to leave.  The being standing over the sleeping boy is Love.  With a drop of his blood, he strengthens the heart of Henry Bishop.  Two words softly spoken to the child as he leaves will be needed.  Henry is now a player.

The following evening, in another part of Seattle nearby, Death, Love's opponent, bends to pick up a sleeping baby girl.  She awakens but Death holds her until she rests comfortably again.  With a single black tear from her eye, Death writes a word on the child's forehead.  This word will direct every facet of Flora Saudade's life. Death utters five prophetic sentences. Flora is now a player.

Seventeen years pass before the players are deemed ready, before the game commences.  Love and Death meet an ocean away, sealing the fate of Henry and Flora by writing their names on a paper. The rules are determined as is the length of the game with a roll of dice.  So much will happen between the 27th of March, 1937 and the 7th of July, 1937.  For Love to win

At seventeen Flora Saudade, an African American, has a single life passion, fixing, improving and flying airplanes.  At night she is a jazz singer of exceptional talent in a nightclub, The Domino.  The Domino belonged to her parents before they were killed in a tragic accident.  Now Flora and her Uncle Sherman are co-owners.  She no longer attends school dividing her time between caring for her Grandmother, working at the airfield for Captain Girard and singing.  Her dream is to find a sponsor so she can buy a plane, fly around the world and surpass her heroines, Bessie Coleman and Amelia Earhart.

Through the curse of influenza and the stock market crash, Henry Bishop, a white boy, with no family of his own, has been living with his best friend, Ethan Thorne, at their mansion.  His father and Ethan's father were best friends.  Bernard Thorne owns The Inquirer newspaper in Seattle.  The Thornes have plans for Henry and Ethan; school, college and working at the newspaper. Henry has secrets.  Ethan has secrets; some Henry does not even realize.  All Henry longs to do is play bass; practicing, playing, and writing music makes his heart sing.

Through an assignment as cub reporters, Ethan and Henry cross paths with Flora.  The drop of blood given by Love, the word written with a black tear by Death and the competition provide an almost otherworldly attraction of the two, Henry and Flora.  Little do they know the clock is ticking.  There is slightly more than two months left.

Do Love and Death sit idly by?  A sparrow may soar near and sing when least expected.  The familiar black cat around the small green house or the club appears and disappears as if by magic.  A Thorne family relative having created a scandal in the east arrives for an extended visit.  There is a new "mayor" in the Hooverville city in Seattle, residence of men without jobs during the Depression.

The layers of story between Flora and Henry, Death and Love, the mix of the four, family and friends build toward a conclusion which will leave you gasping for breath.  Twists and turns you do not see coming heighten the tension to the point where you wonder what sort of resolution will be presented.  This game, this race against time, between Love and Death has been played for hundreds of years.  Love has never won.  Never.


For me excellence is in the details.  In Martha Brockenbrough's mind words are used like a pencil- thin brush.  Her portraits of places, people and events, regardless of the historical time period, are painted so intricately you are transported by the beauty and realism.

The use of dates with some of the chapter headings supplies an additional immediacy.  There are shifts from scene to scene within chapters delineated by a line depicting the passage of time.  Death and Love move with ease to various spots on the globe.  Each of these is flawless, flowing like a film upon a screen.

Whether it's the narrative, thoughts of the characters or the dialogue between them, Brockenbrough gets to the truth of human and immortal natures.  All aspects of what makes us who we are find a place in this story.  She examines with careful thought the roles of Love and Death not just in this game but in the course of human existence.   My copy of this book is peppered with sticky note markers.  Here are some lines and passages.


People are funny about things they couldn't see.  If they couldn't see it, it wasn't there.  Or at the least, it didn't affect them.  But the world didn't work that way, did it?  There were things all around that you couldn't see, and these things had power.

Flora opened her mouth to sing and Henry swallowed hard.  He'd never heard anything like her voice, which made him wish he had his bass in his hands, just so he could return the sounds, a mix of chocolate and cream, something he wanted to drink through his skin.

The sky flashed white and thunder boomed, and the rain fell once more, like letters tipped out of a liquid book.

To be written into story.  That was how even the lost lived on.


Haunting, heartbreaking, heartwarming, powerful, stunning and eloquent are only a few of the words to describe The Game of Love and Death written by Martha Brockenbrough.  Roles of gender, race and class are adeptly blended within a historical setting which is in turn all part of the game of the two eternal beings.  This is a book you will want to read, recommend and then read again.  This is one of those titles when you finish, you look around and can't believe it is May 2015.  A large part of you remains in 1937.

To discover more about Martha Brockenbrough and her other work, visit her website by following the link attached to her name.  Please enjoy Martha's guest post, Friend Friday, at author Kirby Larson's site in which she speaks about The Game of Love and Death.  Martha was recently interviewed at Kirkus about this new title.  UPDATE:  Martha Brockenbrough wrote a guest post on author Gae Polisner's blog, that wee bit heap on July 10, 2015.

Update: Martha Brockenbrough writes an essay about book ideas at NW Book Lovers. She did win a position on the 2016 Pacific Northwest Book Awards list.

This tweet in reply to mine is a treasure.  Thank you Martha for this and your books.

I have been waiting for this woman's response to my book for months. It was worth it.:-) https://t.co/N9r8pgGvqM
— Martha Brockenbrough (@mbrockenbrough) May 4, 201