From The Cosmos A Challenge

When you take away the magic, fairy tales can mirror the real world.  A parent can disappear from our lives through death or divorce.  They are often replaced with another less than savory person who may or may not have children of their own.  Each day brings tasks to be met as a new normal is being shaped. 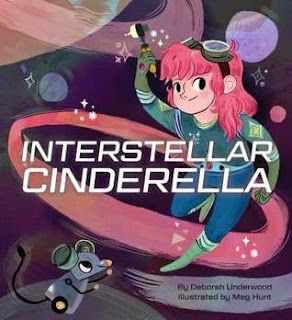 Cultural adaptations supply variances but at the heart of every story is a clever protagonist.  Interstellar Cinderella (Chronicle Books, May 5, 2015) written by Deborah Underwood with illustrations by Meg Hunt draws our attention to a girl, despite her current circumstances, who maintains her focus.  Her determination and choices provide readers with courage and hope.

Once upon a planetoid,
amid her tools and sprockets,
a girl named Cinderella dreamed
of fixing fancy rockets.

By day her mundane household repairs kept her busy but by night she read manuals to increase her understanding of elaborate ship systems.  On the eve of the Prince's Royal Space Parade, her stepmother simply stated the family vehicle had no room for Cinderella.  It was suggested she repair the other broken ship.

Cinderella would surely have done this but those two snide stepsisters took her tools.  Her trusty robotic companion, Murgatroyd, beamed out a signal to the stars.  True to the tale, a fairy godrobot appeared offering a new space suit, a jewel loaded with pizzazz and a sonic socket wrench.  Using her learned skills, the repairs are made and Cinderella's rocket surged into space.

Just in time she settled among the cosmic crowd to watch the Prince's ship pass.  To her surprise (and the Prince's too) smoke belched from the rocket ride.  Our heroine with her new tool in hand fixed the fractured vessel.

An invitation was issued and accepted.  Hours sped by like minutes as conversations revolved around favorite topics.  As midnight neared, Cinderella, jet pack ignited, hastily departed.

A persistent Prince searched for his Gravity-Free Ball date.  He carried what Cinderella had dropped; only in her capable hands would it work well.  An arrival yielded disappointments all around until a mighty mouse prevailed.  A galactic girl and a royal guy struck a bargain.

With the first rhyming sentence we are shooting across time and the galaxies.  Deborah Underwood writes to and for her readers giving a timeless classic her own signature twists.  Her Cinderella not only sets her sight on the stars but rockets around among them; a gal with her own ambitions but also willing to use her skills to help others.  Each point of Underwood's telling leads to a conclusion unrestricted by the norm.  Here is another sample passage.

The prince's spaceship jerked and hissed
and spewed a cloud of grit.
The prince hopped out. "Oh blast! What now?
My chief mechanic quit!"

Although the dust jacket and book case match, readers will notice a subtle difference on the front of the jacket.  The cosmic elements and the title are done in a multi-colored foil as opposed to the bright white on the case.  This pink-haired girl, sporting goggles, her sonic socket wrench, and atomic blue space suit, is most assuredly a match for her step-family and any mechanical problems on the horizon.  To the left, on the back, the prince is zipping through the planets and stars, searching.  It's an introduction to this presentation that's out of this world!

Meg Hunt, as a debut picture book illustrator, continues exhibiting her talents on the opening and closing endpapers, depicting an array of tools Cinderella would have at her disposal in her workshop; micropliers, megamag mallet, antimatter hammer, plasma pump or googol gauge, to name some depicted. Smaller images of these items are depicted on the verso around the text.  The words on the title page are framed in starry items, Cinderella in flight, Murgatroyd and space beings in ships.

Most of the illustrations, rendered in gouache, brush and ink, graphite, rubylith and digital process, span across two pages. The color palette is evocative of space and life on planets other than our own.  Hunt's lines flow but also portray firmness in the details on the character's faces, their attire, the robots' parts and in the interior and exterior places.

One of my favorite pictures is the first one on two pages.  We zoom-in on Cinderella seated outside on her planet, her spaceship nearby under a port.  She is wearing her everyday clothing and gloves, holding a crescent wrench in her hand with her tool box next to her.  Her robot mouse companion is gazing upward with her.  The constellations drawn in the sky reflect her dreams; each is a different space ship.

Every collection will want to have a copy (or two) of Interstellar Cinderella written by Deborah Underwood with illustrations by Meg Hunt.  It is a rhythmic romp among the stars with a young woman of courage and conviction.  I think readers will be requesting to hear this repeatedly or maybe they will want to present it as a play.

For more information on Deborah Underwood and Meg Hunt please follow the links attached to their names to visit their websites.  This link will take you to Meg Hunt's blog.  She gives us peeks at interior illustrations.  Meg Hunt is featured at teacher librarian extraordinaire John Schumacher's blog, Watch. Connect. Read.  Deborah Underwood was a guest blogger at the Nerdy Book Club speaking about this title.  (There are illustrations there, too.)  Here is educator Colby Sharp's review of Interstellar Cinderella as part of the trifecta.  Deborah Underwood chats with Matthew C. Winner, the busy librarian on his Let's Get Busy podcast.
Posted by Xena's Mom at 5:49 PM