Choosing the next book to read from our TBR (to-be-read) stacks can be challenging especially this time of year.  We are valiantly trying to read those books published in 2014 while keeping our eyes wide open for new titles being announced by our reading colleagues and friends and in professional journals.  We are well aware of those books from previous years still patiently waiting on our shelves ready to join our reading lives. 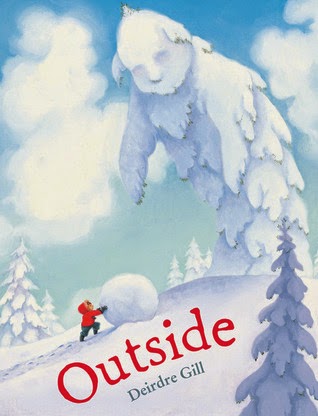 On this Friday past Julie Danielson, author (Wild Things! Acts Of Mischief In Children's Literature Candlewick, 2014 with Betsy Bird and Peter Sieruta) and blogger at Seven Impossible Things Before Breakfast, mentioned a winter title in her post, What Happens When It Snows, at Kirkus.  When I was visiting my favorite indie book shop, McLean & Eakin Booksellers on Saturday, I found it waiting for me.  As I opened the cover of Outside (Houghton Mifflin Harcourt, October 21, 2014) written and illustrated by Deirdre Gill, the quiet talk of the other customers and shopkeepers faded away, replaced by the quiet of a snow covered landscape.  I was caught inside the Outside.

Outside, snow falls silently on the house.

In a house there are two boys.  One is ready for some action.  One is ready to play; the younger of the two.  He bundles up in all his winter clothing and heads out the door.

Without a second thought he first falls back into the deep snow, making an angel.  Feeling in awe of what he sees up and around him, he knocks on the window again asking his brother to join him.  Slighted but determined to make the best of it, he starts to roll a ball of snow.  Winding his way through the nearby woods it gets to be larger than he is.

When it gets too big to move, he shapes a snowy companion.  They don't waste a single minute; building a structure to rival those fabricated in medieval Europe or in our imaginations.  This daring residence, dear readers, invites a creature to swoop into their presence.

The boy soars to new heights with this fantastic friend.  They fly over the familiar landscape until it appears in miniature below them.  As the sun sets that which came from the snow returns to the snow.

Trudging back to his home, the boy, his mind filled with his day's adventures, is greeted by his brother.  In the fading light of day and the glow from within the house, the two decide to do one more thing.  You never know what playing outside will bring into your world.


Deirdre Gill fashions her narrative in such a way to slowly build toward several page turns which astound readers. (There are only ten sentences in the entire book.)  Her sentences start out reflective and observant.  Some are spread over two, even eight pages.  She cleverly lulls you into a pause which makes the surprises even better.  She never waivers from the simplicity of carefully chosen words.


Rendered in oils the illustrations clearly convey the wonder to be found outside in the snow, if you are willing to seek the extraordinary.  Images on the matching dust jacket and book case depict beings formed by our minds' eyes and hands.  A cool wintry blue provides color for the opening and closing endpapers.  A toy resting on the window sill beneath the title foreshadows events later in the story.  Our eyes follow a trail of footprints beginning on the verso and continuing to the dedication page.

To make a point or represent an emotion Gill shifts from double-page pictures to single page visuals or a grouping of smaller pictures on a page.  Several of her illustrations are wordless.  Her perspective of the younger brother looking at the sky contains the faintest hint of possibilities.  These choices coupled with her placement of text supply the flawless flow of the story.

Details, words written on a frosty glass, footprints on stairsteps, evergreen branches laden with snow, combined with her skillful use of light and shadow create the feeling of being a part of remarkable moments.  I think one of my favorite illustrations is when the boy is back in the forest after his flight.  We are looking down on the scene of him small among the gathering of towering trees.  His hand is resting gently on his trusty mode of transportation.  You can feel the awe.


If you are ready to really see what is in front of you every day by using your imagination, Outside written and illustrated by Deirdre Gill is the perfect title for you.  If you are ready to explore the snowy outside world in winter, Outside is the best choice.  If you want excellence in storytelling don't miss Outside.

To discover more about Deirdre Gill please follow the link embedded in her name to access her website. There are seven other images from this title featured there.  This is her first picture book.
Posted by Xena's Mom at 2:19 PM