Growing up there was nothing like Saturday morning cartoons.  With limited television viewing allowed during the week, we lived for this first day of the weekend.  Even then there were only certain shows we could watch at certain times.  Whenever my mother did her grocery shopping on Saturdays, she would come home and feel the television set to see if it was warm.  We learned promptly to turn it off when we knew she might return. 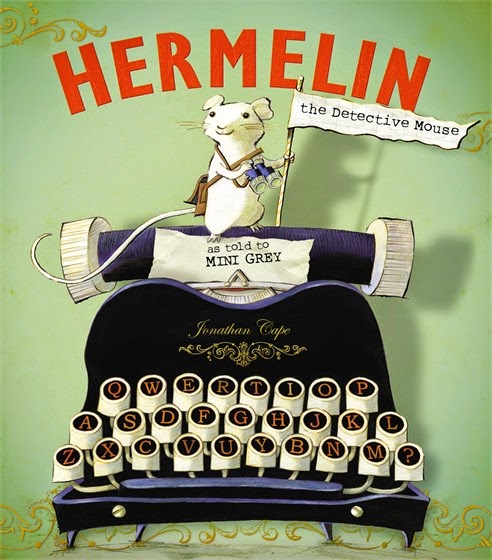 A show whose theme song was used in countless make-believe games in the neighborhood and to this day is as clear in my memory as it was then is Mighty Mouse.  As children it's empowering to see someone small with the ability to make a difference for the good of all; a pint-sized superhero to the rescue.  Mini Grey, an author illustrator, who entertains readers with her trio of Traction Man titles and Toys in Space, released a new title in the United States in the summer of 2014, Hermelin the Detective Mouse (Alfred A. Knopf, an imprint of Random House Children's Books).  It's good to see a little guy take the lead.

It was a brave new day on Offley Street.

A wee being is viewing all the comings and goings within the row of seven buildings.  The activities of a dozing doctor, a chatty woman of wealth, a creative salad maker, a touch-and-go tea party partaker, a concerned baker, a cereal seeker, a toast tosser, a baffled pet owner and sign setter are duly noted by his watchful eyes.  You might be wondering how someone so small could see all this.  He's using his new pair of binoculars, of course.

Hermelin, so named by the word on the outside of the cheese box where he is born, originally discovers he is able to read.  In short order he sets up residence in the attic of Number 33 Offley Street.  In this attic is a typewriter.  To his utter delight, Hermelin learns he is able to write by pressing the keys.  On this trying-out-my-new-binoculars-day, as he is walking by the Offley Street Notices board, he observes a great deal of postings for missing items.

Hermelin, never one to pass up a challenge, realizes he is the perfect mouse for the purpose of locating all these lost treasures.  A handbag, a pair of glasses, a toy bear, a goldfish and a diamond bracelet are rapidly recovered with type-written notes left so the owners know where to look.  All are signed by Hermelin.  No one in the neighborhood has any idea who Hermelin is.

About to return a missing notebook, our resolute solver-of-mysteries sees a disaster in the making.  His typewriter is stories away.  Quick thinking and paper airplane skills assist in averting a tragedy.  Hermelin is the headline story in the local Offley Times written by Emily, another resident of Number 33 Offley Street.

The next day our stalwart saver-of-the-day sees another note on the Offley Street Notices board.  It's an invitation to a thank-you party for him.  As you can imagine his appearance receives less than cordial greetings.  Barely escaping with his fur and whiskers intact, Hermelin is prepared to leave him attic home.  Readers soon learn there is another detective with a nose for news who might be looking for a partner.


The first thing readers will notice about the story penned by Mini Grey is the names she imagines for her characters; Lady Chumley-Plumley, Imogen Splotts, Captain Potts and Bernardo Bosher to name a few.  They, like the narrative, roll right off your tongue in a cheery conversational sort of way.  Along with the text for her tale, as told by Hermelin, she freely includes dialogue in speech bubbles, notes and posters making us feel like silent sidekicks.

Her short matter of fact sentences and word choices create a rhythm and pacing, a flow, pause and excitement, as we piece the puzzles together along with the mouse detective.  In using Hermelin as the narrator we develop an affinity for him and his day-to-day adventures.  Here is a sample passage.

Then I found this attic.
It is at the top of
Number 33 Offley Street.
It is full of books and boxes
and boots,
and also
a typewriter.


According to an interview given at Seven Impossible Things Before Breakfast, a blog hosted by author Julie Danielson, Mini Grey enjoys rendering her illustrations like this:

I usually use watercolour, ink, pencils and collage bits and bobs on heavy watercolour paper.  I am keen on Quink ink and bleach.  I love splattering.  And I use a computer quite a lot.

When opening the matching dust jacket and book case this is clearly evident on the back.  It features a portion of the Notices board with not only notes posted by the residents of Offley Street but pieces of information about the story, the ISBN and data normally found on the verso.

Hermelin standing like an explorer on his typewriter is the picture of good-natured determination.  The orange seen on the typewriter keys becomes the color for the opening and closing endpapers.  Beneath the title on the formal page in a loose circular picture we see a Hermelin delivery truck driving down a dark street.  The back doors are open as a carton is thrown out the back to the pavement.

Grey's images are a mix of sizes and perspectives with pictures set inside of other pictures.  This technique invites readers to take the time to look at all the amazing details she includes.  For the voice of Hermelin all the text has been written on a typewriter.  A variety of font styles are used for all the other words.  With every single page turn pictures portray animated characters and action.

One of my favorite two pages is of Hermelin in the attic.  For a page and about a third of the next, on the right, he is shown sitting in a chair reading as sunlight streams in from a small circular window.  Stored stuff from the past and small items relative to him are scattered about the room.  On the far right in the second picture we see him seated on a spool of thread paws outstretched as he touches keys on the typewriter.  The paper on the roll and four others shown below him are the text for this illustration.


How can you not want to read this book over and over again?  How can you not want to share it with everyone you meet?  Hermelin the Detective Mouse as told to Mini Grey (written and illustrated by Mini Grey) depicts a heartwarming hero putting others' best interests first.  He not only saves the day but is saved by someone who recognizes his potential other than the dictionary definition of mouse.

To learn more about Mini Grey and her other titles please follow the link embedded in her name to access her website.  She includes eight pages from this title including my two favorite ones mentioned.   Hermelin the Detective Mouse appears on The CILIP Kate Greenaway Medal Nominations for 2015.
UPDATE:  This post at PictureBook Makers about this title is amazing!

In case you don't yet have a melody stuck in your head for the day, here is the theme song to Mighty Mouse.