The Wait Is Over...The Plot Thickens

The intrepid trio is back.  And I couldn't be happier. When we first met Willy, Bobo and Earl in I Must Have Bobo!(Atheneum Books For Young Readers) by Eileen Rosenthal, illustrated by Marc Rosenthal, I could hardly wait for this next installment.

As in the first book, it is crystal clear in I'll Save You Bobo! (Atheneum Books For Young Readers) wherever Bobo is, Earl is close at hand and wherever Willy is, Bobo is next to him or nearby. 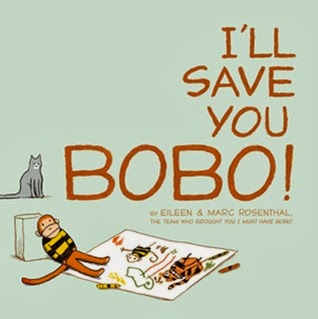 WILLY IS HAVING A HARD TIME READING...
GO AWAY, EARL.

In typical fashion Earl is trying to weasel Bobo away from Willy.  Snuggled in a big easy chair Willy is reading a dinosaur book to Bobo eager to reach the "survival of the fittest" section boys so love, only to discover it's not what he expected.  Not to worry, he and his stuffed monkey BFF, Bobo, are going to become authors.

Crayons and paper spread across the floor Willy begins their adventure drawing as he narrates to Bobo.  Beginning in a jungle, a big green jungle, with huge trees, a snake with a red tongue, poison mushrooms and wait...stop...Bobo and Willy in the story have a tent!  Two chairs and a sheet later the story continues wild animals everywhere, especially the tiger with huge teeth climbing toward Bobo as he explores among the trees.

Unbeknownst to Willy, Earl has been climbing up the chair bringing the precarious tent crashing down.  Completely disgusted Willy stalks away, supplies and Bobo in hand, as an equally disgusted Earl watches.  Cozily perched on his knees Willy starts over at a table.

This jungle is more dangerous than the preceding one, filled with vines and cat-eating snakes.  Poor Earl it would seem, has been consumed by a vicious jungle snake.  Pleased as he can be, Willy concludes his story.

But is it really the end?  It's surprising what a cat tail can feel like to a bare foot.  Who saves Bobo, indeed!

Eileen Rosenthal has a knack for striking the exact emotional tone of Willy's speech to Earl as well as in his storytelling skills as a young author.  Clever word choices place Willy in control of the day's adventures, in and out of his imagination, at least from his point of view.  Concise sentences provide  the perfect opportunity for Marc Rosenthal's complimentary artwork.

Creamy, rich, golden endpapers extend to supply the backdrop for the illustrations throughout the book.  In this tale Earl is prominently pictured in the lower right hand corner of the front endpapers patiently awaiting the page turn; this cat is the Prince of patience, of perseverance.  Warm brown pencil drawings are filled in digitally with basic colors, colors from Willy's box of crayons.

Visual thought bubbles appear above Willy depicting a more mature rendition of his childlike artwork; artwork doing more than telling a story.  With his usual attention to detail Rosenthal has Earl, back arched hair standing on end mouth in a scared yowl, gazing in horror at one of those snakes with long, red, forked tongues.  On the floor earnestly at work, Willy has his tongue out also.

You have to love Bobo, inanimate dressed in his black and yellow sweater, the object that binds these two family members together in their tug-of-war for his attention.  Author Eileen Rosenthal and illustrator Marc Rosenthal bring their delicious blend of humor to I'll Save You Bobo! endearing more readers to these charming characters.  One-on-one or as a group read aloud these two titles are story time favorites.

For more about Marc Rosenthal here is a link to an interview he gave at Seven Impossible Things Before Breakfast on October 4, 2011.  To see other images in this newest title follow this link to the Simon & Schuster web page.
Posted by Xena's Mom at 10:11 AM