Picture book lovers, one and all, have their favorites; those choice volumes read and reread and gifted to others so they might experience what each title offers to them.  Whether it's the witty or profound narration, the engaging, endearing or entertaining illustrations or a combination of the two, once smitten it's forever.  About the only thing better is when a sequel makes an appearance; the colorful characters, the dialogue and storyline lavishly laden with humor and luminous, explicative illustrations, return.

When author Tammi Sauer and illustrator Dan Santat blended their substantial talents to bring readers, Chicken Dance (Sterling, 2009) we were introduced to the King of farmyard fame, Elvis Poultry, and those two feathered friends, Marge and Lola.  Strutting their stuff, rocking to their own rhythm, those ladies captured the eye of the one and only E.P.  Rejoice readers, they're back.  Sauer and Santat are jiving to their own special tune, better than ever, in Bawk & Roll (Sterling). 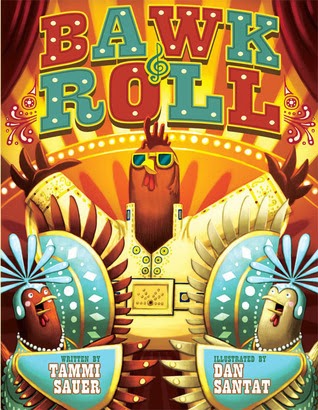 Bawk & Roll begins not a single beat after the end of the first volume.  Marge and Lola, peering out the bus window, are about to go on tour with Elvis Poultry as the Chicken Dancers. On their first gig, McDoodle's Barnyard, a heavy dose of stage fright strikes.  As the audience shrieks in anticipation Elvis turns to look behind himself at the sound of a loud, resounding THUNK.

Yes siree! those frantic fowl have fainted.  During the course of their conversation the next day, they think imagining the crowd in tightie whities might work.  Nope.

Poultry jumps, literally, at their next idea of easing into the following engagement.  Somehow crashing into the windmill as they plummet from the barn roof was not what they meant.  Leaving no pebble unpecked to relieve their heebie-jeebies, the gals are at a loss.

In the dead of night hatching a plan answering a riddle as old as time, the duo does what must be done.  Arriving the next evening at Dale's Dairy Farm, cries of Elvis! Elvis! Elvis! fill the stage as the curtains rise.  But that's not all Lola and Marge hear; an answered request reverberates off the rafters.

As a prolific producer of puns, Tammi Sauer wins hands down.  Her spare text conversationally proceeds, pauses and then sneaking up on you in the best way possible, causes you to explode with laughter. (Believe me, I did, at the second and third readings, too.)  There is an unmistakable pulse to her prose beckoning readers to participate.

In my typical fashion I opened up the book jacket, on the front is Elvis Poultry in his classic white suit, Lola and Marge now looking like showgirls in matching outfits and on the back is the sunglasses clad rooster crooning into a mike on the cover of an album by Sterling bawkabawk records, LP with song titles such as Are You Lonesome In Flight?  Mirroring the rich, golden oranges, yellows and reds with a splash of white from the jacket, the cover is plain except for a few floating feathers and a small portion of four chicken legs, feet pointing upward.  Endpapers are nearly identical zooming in on the tour bus but the front and back are different in who is hanging out the windows; a reflection of the storyline.

For Dan Santat this is but the beginning of his use of vibrant color, facial expression and impeccable attention to detail to visually chronicle Sauer's text.  The title verso is surrounded, scrapbook style, with small clips from the first book bringing readers up to speed.  On the title page the ampersand between Bawk and Roll has been traded for a musical clef.

Fresh fun is found on very page; a cow, a fan of Poultry's, wearing a cock's comb hat, the newspaper (The Daily Cluck) headlines after each failed performance, Elvis having rollers in his comb to give it curl, and his portrayal of Lola and Marge, in a series of vignettes, trying without success to calm themselves.  Each time the pair of cluckers look at the masses, their eyes, white circles of panic, say it all; a clear contrast to the cool, calm of Elvis as he moves through his days and nights as a true celebrity never without wearing the golden shades.  Two page spreads of the baffled but determined chicks with the rockin' rooster are hilarity defined; my favorite being Elvis Poultry wearing his parachute as Lola and Marge, greatly diminished watch from the barn roof.

Bawk & Roll written by Tammi Sauer and illustrated by Dan Santat is a collaboration clamoring for an encore.  Fowl featured so favorably will have readers flocking and rocking.

More fun, laughter and goodies can be found at the author and illustrator websites linked in this post.  When the initial title was released a separate website was started and is linked here.  Elvis Poultry can be followed on Twitter @elvispoultry.  To celebrate the release of this book follow their blog tour beginning here.  Don't miss any of these egg--stras.
Posted by Xena's Mom at 6:36 AM