Three Pigs and One Wary Wolf

As far as I can tell the three little pigs and the wolf have been entwined together since 1849 when they were printed on the pages of Popular Rhymes and Nursery Tales by James Orchard Halliwell.  He is later given credit by Joseph Jacobs when his version appears in the English Fairy Tales of 1898.  It is this variant with which most readers are familiar.

Each author/illustrator brings their own particular slant to the tale choosing to either remain faithful to the original plot or by creating an entirely different scenario for readers.  Author/illustrator Emily Gravett in Wolf Won't Bite! (Simon & Schuster Books For Young Readers, March 20, 2012) stages a production unlike any other.  Her troupe of trotters has managed to soothe the savage beast, a listless lupine. 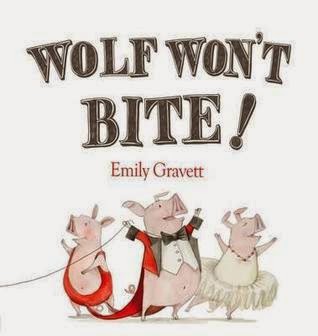 Three pigs clothed in circus attire, one in a white fluffy tutu, another in the coat, shirt and tie of a ringmaster and the third in a one piece weightlifter tight, shout out news as a woebegone wolf peers from the openings of a covered carnival wagon.  Each of these porcine performers can make the wolf do unimaginable feats:  stand on a stool, dress him in a bow, ride him like a horse, jump through hoops or dance a jig.  Throughout all these antics WOLF WON'T BITE!

As each act escalates, the three attempting to outshine one another while in collaboration, wolf barely maintains his sanity.  When the daring, darling trio gloriously proclaim they can even put their heads in his mouth, readers are treated to a funny, flip-flop finale.  Instinct intact wolf prevails as porkers panic.

Emily Gravett's use of watercolor and water-based pencil to render the illustrations for this book is as always flawless.  The front and back cover create a full page picture of the three pigs arms raised in triumph string attached to a less-gleeful wolf growling...Grrr. The front endpapers visualize the chase as one pulls the carnival cart, another carries a huge net with the ringmaster leading in hot pursuit of their quarry.

Staying true to her theme the two page title spread is adorned with the trio pasting up a proclamation announcing the upcoming show.  Thick white pages provide an impeccable canvas for her hand-lettered text employing a variety of font styles accentuating each new wolfish exploit.  A small palette of hues, reds, grays and golds highlights Gravett's gift of detail and expression.

It is the wolf's eyes, at times wide and fearful, as the inattentive pigs playfully prance, that draws in readers.  Careful readers will sense the shift in his emotion before the text tells the tale.  Closing endpapers portray a harried hunt once again.

Wolf Won't Bite! written and illustrated by Emily Gravett, winner of the Kate Greenway Medal for Wolves, is a celebration of misguided jubilance coupled with a polished, classic turnabout.

Whether focusing on pigs, the role of wolves in stories, teaching about fairy tale variants or just for fun this title is a stellar addition.  Follow this link for a SpicyNodes creation about stories with some form of the three little pigs and the big bad wolf.  I could not resist adding a link to the YouTube video of the Disney version with the famous song.
Posted by Xena's Mom at 5:45 AM