Good books, like good recipes, not only need specific ingredients of the highest quality and exact quantity, but the perfect combination of those elements added at the precise moment.  The placement of a word, phrase, sentence or paragraph heightens the experience for the reader as a pinch of spice enhances the flavor of a delectable dish.  Certainly this opening sentence provides the enticing whiff, the first glimmer, of what promises to be a first class feast for the mind for those turning the pages of Chomp (Alfred A. Knopf) by Carl Hiaasen. 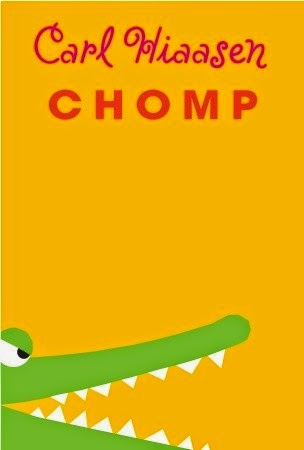 Mickey Cray had been out of work every since a dead iguana fell from a palm tree and hit him on the head.

Dead weight, courtesy of a freaky freeze in the Florida Everglades, has left Mickey Cray, a wildlife wrangler, seeing double and enduring killer headaches.  Behind in mortgage and truck payments his wife, an expert at Mandarin Chinese, has no choice but to go to China assisting big wigs in American companies from making language blunders.  With summer vacation looming in the near future it's up to Wahoo, Mickey's son, named after a professional wrestler not the saltwater fish, to manage the family menagerie populated by alligators, snakes, parrots, mynah birds, rats, mice, monkeys, raccoons, tortoises and a bald eagle.

Within minutes of Mrs. Cray's departure Wahoo, answering a phone call, accepts, to his father's disbelief, a job.  Wrangling for Derek Badger, superstar of Expedition Survival!, at one thousand dollars per day, just might save them if Wahoo can sooth his father's disgust and indulge the star's inflated ego.  Within one day Wahoo realizes survival for all of them is going to be a serious challenge; more grave than he can even imagine.

Thrown into the mix are the Cray's snapping turtle who disagrees with getting up close and personal with Sanders and Alice, their twelve foot alligator, who does not want a pudgy, fake, survivalist crawling around on her back.  Despite what happens at the Cray's, caution has been thrown to the wind.  Derek Sanders wants to shoot the rest of the show in the wild with only untamed animals. At this point the storyline, already a gripping, action-adventure, clicks it up a couple more notches.

Joining the ever present Raven Stark, Sanders' production assistant, sporting a red beehive hairdo, giving new definition to the term multi-tasking, is Link, a true blue good ole' boy of the swamp built like a bulldozer, loving his airboat like a child, Sickler, owner of the store and docks where the crew sets up camp, eager to make money any way he can, and a gun-toting alcoholic who has lost all reason.  Bag in hand asking for a ride when the Crays are stocking up at WalMart, Tuna, a girl in Wahoo's grade, needs a safe place to be.  With this cast of characters loose in the Everglades anything can and everything does happen.

Hiaasen's following has ever grown since his publication of Hoot (2002), followed by Flush (2005) and Scat (2009), not to mention the host of adult titles he has penned.  What sets Chomp apart, making it one of my favorite reads of 2012, is the descriptive, detailed, fully developed characters and the interplay between the characters through the sharp, snappy dialogue.  The pacing is brilliant, quick and flawless.  And the wit and humor tie it all together like the best bow on a prized package.

Here are a few examples:

Mickey seemed dazed.  "I used to like iguanas."
"We'll be okay."
"My head hurts."
"Take your medicine," said Wahoo.
"I threw it away."
"What?"
Those yellow pills, they made me constipated."
Wahoo shook his head. "Unbelievable."
"Seriously.  I haven't had a satisfactory bowel movement since Easter."
"Thanks for sharing," said Wahoo.

"Think positive," Raven said.
At that moment, a disgusting glop of something flew out of the monkey pen and splatted in her hair.
"You have got to be kidding," she said.
The director ran for cover as the monkeys threw more, yowling uproariously.

But Mickey's hands were locked in a death grip on the steering wheel, and he was squinting like a stamp collector through the windshield.

Two admirable teen protagonists thrown together by the daunting circumstances supplied by life, the flora and fauna of the Everglades, and a group of real people, flawed, funny and frightening, make for one spectacular, wild read, Chomp by Carl Hiaasen.

Here is a link to an educator's guide at Random House Kids for Chomp.  Don't miss a visit to the Carl Hiaasen for Kids website complete with a video book trailer for Chomp, information about the other books and a couple of games.
Posted by Xena's Mom at 6:07 AM